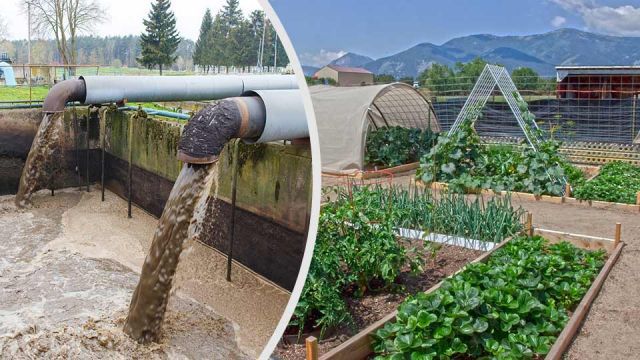 “Mmm, I want a bit of sewage sludge to start my day,” said no one, ever. In today’s modern society, we are so far removed from where our food comes from. However, if most people knew what was going on behind the scenes, they would definitely consider becoming vegetarian before learning to grow all (or at least some) of their own food.

Growing up, I lived across from a farm and it wasn’t uncommon for my dad to use manure in the garden. This is a natural process and when used as a soil conditioner, it can provide plenty of N-P-K (nitrogen, phosphorus and potassium). What’s not natural is the use of sewage, including toxic chemicals and human waste.

Yes, you read that right. “Treated” sewage sludge is being used to grow the foods we eat.

Are farms really using sewage sludge as a fertilizer?

When reading those words, the answer seems obvious. I mean, how can government agencies, including the Environmental Protection Agency, allow this?

Well, not only do they approve of sewage sludge, but they proudly advertise the benefits of “biosolids” on their website. In fact, an estimated four million tons of treated sewage sludge is spread onto fields across the country, even though there’s evidence that this process causes harm. That equates to more than half of all the biosolids produced in the United States.

Although you may first think about the human waste component, which in many ways can replenish the soil with nutrients, the real concern here isn’t treated human poop. Many people are worried about the toxic contents found in that waste, including pathogens, heavy metals and pharmaceuticals.

Also, many experts agree that this is not a sustainable approach. Although economically viable for farmers when compared to commercial fertilizers, chemically-laced compost (a.k.a. biosolids) and commercial fertilizers are making us move further away from what’s needed — a harmonious relationship with nature.

Although there is no quick-fix here, we must focus on building up ecosystems to yield the best possible growing environment. However, as of today, biosolids are being used in all 50 states.

Why you need to be concerned

The environmental implications are one thing, but the way in which biosolids threaten human health is another. That is because sewage sludge isn’t simply made of 100 percent human waste. When studied, researchers have found that biosolids contain high concentrations of active ingredients found in both drugs and household products.

As stated on the USGS website, when scientists studied nine samples of publicly or commercially available biosolids, they found 55 of the 87 chemicals used in pharmaceuticals, cleaners and other personal products. Shockingly, 25 of these chemicals were present in every sample, including an antiepileptic drug, a musk fragrance, an antimicrobial disinfectant and an antihistamine.

There have been numerous studies conducted over the years, and one researcher, in particular, helped stop EPA promotion of sewage sludge — although it is still allowed. It was Dr. David Lewis, an internationally recognized research microbiologist who shared his findings.

For over 15 years, he has taken part in various legal challenges regarding the use of biosolids. As stated in his peer review, published in BMC Public Health, “The health risks from applying sewage sludges should be considered based on the potential interactions of chemical contaminants with low levels of pathogens.”

From flame retardants to presence of Prozac, it is well understood that biosolids contain a wide range of neurotoxic and mutagenic chemicals. You can review all of the contaminants, including the detection of steroids and hormones in a report published by the EPA.

At the end of the day, this has largely been a case of corruption and conflict of interest.

Can I avoid “biosolids” in my food?

After reading the information above, it’s natural to want to do something about it… and you can!

Your first option is to buy organic. However, nothing is 100 reliable (or credible) in terms of our modern food system. In theory, if a product has the USDA organic logo on it, the use of sewage sludge is prohibited during its production.

With that being said, there has been some controversy surrounding organic compost, and many experts agree that there’s no way of really knowing — even when you purchase a premium organic product. When buying compost, if you see “milorganite” on the label, avoid it.

Your best bet is to call your local nursery and ask about their composting practices. Many will make their own and proudly say, “No, we do not use biosolids.”

Another option? Head down to your local farmers’ market and get to know the hardworking individuals and families that live in your community. There are often many organic farmers that would be happy to talk about their farm and livelihood, instead of treating food production as some sort of top-secret event. In many cases, these farms welcome the public to visit their farm where they sell goods directly from their property.

Another option is to grow fruits and vegetables yourself. For those who have space, gardening is a great activity that not only provides the freshest foods possible but also supports a more active lifestyle. Here are five DIY non-toxic pesticides and herbicides you can use.

Aside from these tips, the best thing you can do is educate others. After all, as Eckhart Tolle says, “Awareness is the greatest agent for change.”