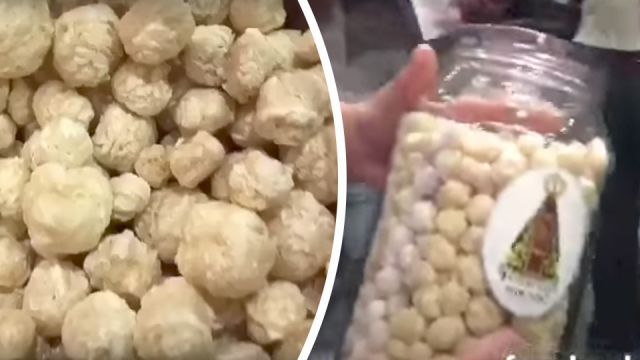 If you were hungry enough, what’s the worst thing you’d consider eating? If your answer was something along the lines of “indeterminate, dehydrated industrial waste,” then you might want to consider moving to Sao Paulo, Brazil. To mark World Food Day, the city’s mayor, Joao Doria Jr., unveiled a new program to fight hunger. The program, Food for Everyone, will distribute this stuff to the poor:

Your daily dose of dystopia: São Paulo's mayor wants to feed the poor with pellets made from a mix of unwanted and nearly expired food items pic.twitter.com/oWwDFGNOAV

“This is a blessed product,” Doria recently stated. The product itself has been optimistically named “Allimento,” or food, in Portuguese. Beyond that, little is known about what these pellets actually contain. In a marketing video promoting Allimento, Doria explained how the pellets are highly nutritious, and overflowing with all the vitamins and minerals a healthy person needs. He could even be seen handing out a few pellets to awaiting journalists. Watch closely at around 0:47, and you can even see one taste tester seemingly nodding in approval after sampling the Allimento.

Nonetheless, it’s not the taste that has critics concerned, but rather the unidentified contents of the pellets. At the time of writing, there was no publicly available information on what exactly these Styrofoam-like balls contain. According to Food for Everyone, the pellets are dehydrated waste from industrial food processing, including food scraps that are unable to be commercially sold or are nearing expiration. On that information alone, the Regional Council for Nutrition has condemned Allimento as a violation of human rights.

“The Regional Council for Nutrition declares itself opposed to this proposal because it contradicts the principles of the human right to adequate food… in total disregard for the advances made in recent decades in the field of food security,” they stated.

Nonetheless, Doria has defended the unorthodox food, comparing it to astronaut and military rations. “It’s good, I tried it, I ate it, it’s no problem,” he said.

At least one nutritionist agreed.

“It’s a way of providing food and… nutrients to those who have little or no access to food,” nutrition expert Roseli Ueno told Brazilian newspaper O Globo. She argued that just because it’s made of waste, that doesn’t mean it’s not fit for consumption. “Throwing away food when there are people going hungry doesn’t make the slightest sense,” she said.

Yet not everyone agrees. Another nutritionist, Daniel Bandoni, told O Globo that even if Allimento does have nutritional value, it could still be a terrible idea.

“This completely decontextualizes what it means is to eat,” he said, arguing the food’s bland appearance could do more harm than good. In particular, he argued it could be degrading, and harm the self-esteem of Sao Paulo’s poor. “You do not just put the food in your mouth, you chew and swallow it,” he said.

Despite the criticism, Doria has big plans for Allimento. The product will initially be distributed for free via churches and NGOs across the city, and may even go nationwide. “It will begin in Sao Paulo, initially, and then throughout Brazil,” he said.

Around 66 million Brazilians lack reliable access to food, according to Oxfam. Globally, that figure is around 815 million, according to data from the World Health Organization (WHO). By that estimate, more than one in ten people are going hungry right now, and that number is only rising.

“Over the past decade, conflicts have risen dramatically in number and become more complex and intractable in nature,” the WHO said in a joint statement with other major United Nations humanitarian agencies.

So what’s the solution? Sao Paulo is far from alone in experimenting with novel ways of combating hunger. So what are some other options on the table?

Allimento has already been compared to another food substitute with growing popularity in Silicon Valley. A thick, bland ooze inspired by the dystopian film where it gets its name, Soylent has garnered millions of dollars in investment. For just $3 a serving, you get a standard meal’s worth of carbs, fat and protein, minus the taste. Its creator, Rob Rhinehart, has claimed it could help fight world hunger, though critics argue soylent’s lack of aesthetic or flavor appeal could be a stumbling block.

When discussing food in Brazil, it’s hard to ignore one of the country’s neighbors, Venezuela, which has drawn both praise and condemnation for its food distribution programs. Their latest and most controversial initiative, the CLAPs program, sees state subsidized food sold to households at extremely low prices, via local community groups. Unlike Soylent or Allimento, there’s no gimmick — it’s just regular basic food items like rice, flour, canned goods and the occasional meat. However, critics argue the food is distributed inconsistently and unfairly, with opposition groups accusing pro-government community networks of giving the food to their own supporters at the expense of other poor families. Having said that, Venezuela has been praised by the United Nations for reducing hunger.

On the other side of the world, the Spanish town of Galdakao began experimenting with its “solidarity fridge.” Located in a public area, anyone is allowed to put unneeded food in the fridge, and anyone is keen to take what they need. Volunteers work to enforce rules, such as a ban on expired food and raw meat. The initiative is reportedly quite popular.

From waste to taste

Finland’s version of the fairteiler involves collecting unwanted food from supermarkets. Most of the food is donated to food banks, while around 10 percent goes towards a local restaurant that promotes the program. The Oxford Food Bank has a similar model.

Another initiative with its roots in Spain, the crop gleaning movement sees volunteers collect unwanted agricultural produce to make soups, sauces and jams. Volunteers have to collect the produce directly from the fields, but as a perk, they’re allowed to keep a small crate of their harvest, while the rest is donated. A similar program with a focus on unwanted produce, Kromkommer, exists in the Netherlands.

In India, the Robin Hood Army collects excess food from restaurants and events like weddings, and distributes it directly to the homeless. The 5,000 person-strong “army” relies heavily on social media to encourage businesses to support them, and uses a decentralized model of small teams to find donors and hand the food to the most needy. So far, they say they have fed half a million people.

So what do you think? How does Allimento stack up to these other ideas, and what is the best way to approach the global hunger crisis? We’re hungry for your opinion, so let us know what you think in the comments below.