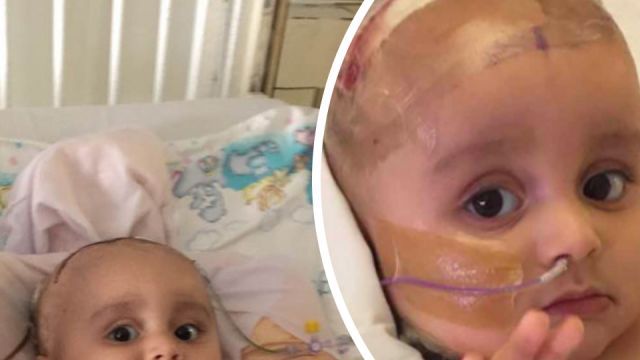 A 9-month-old baby of a retired NYPD officer, Wayne Richardson, is being denied coverage from their insurance company, despite the fact that the infant an aggressive brain cancer.

The father said that the insurance company argued that his son’s brain cancer was “not medically necessary” and would not be covered.

‘Dear Connor Richardson,” the gut-wrenching letter said, “As HIP Health Plan of New York, we try hard to provide you with access to quality healthcare services that meet your needs. When we decide to deny coverage for treatment or service, we want to make sure you know why.”

The letter also mentioned that past medications given to the baby did not meet the general care used to treat that particular kind of tumor in other cases.

Connor has an extremely rate teratoid rhabdoid brain tumor, which is blocking blood flow to his spine. Doctors have removed the tumor, but sadly it has returned.

Here is a picture of Wayne with his son:

Read this if you want to get angry and sad https://t.co/tAUfekWqdY pic.twitter.com/SHtn53nWIt

The hospital where Connor is currently at, St. Jude’s Children’s Hospital in Memphis, TN, has decided to put the baby on a combination of four drugs in an attempt to save his life. Unfortunately, Connor’s chances of surviving are slim.

Wayne first noted problems with his son when he was seven months old and was crying profusely throughout the night and had his eyes popped wide open. This assured Wayne that his child definitely had some sort of problem which would require medical attention.

Connor’s mother, Janaida, originally took him to a small hospital near their Long Island home, where he had emergency surgery, one through the front of his skill, the other through the back.

Connor’s kind of tumor afflicts one out of every 1.1million people each year.

As one would expect, Wayne was shocked when we got the letter from the insurance company and pointed out that on the top of the letter the type of review was ‘prospective’, and the type of denial was ‘medical necessity’.

“You’re taking away from them and their research because the insurance doesn’t want to pay,” Wayne said.

Wayne also mentioned that as a parent, he doesn’t care what it costs to heal his child because he would pay no matter what. To him, the main problem is that the insurance company is limiting research on this deadly cancer.

He is planning to strongly fight the denial, especially because the chances of his son dying are much higher without the treatment.

Connor has been at St. Jude’s hospital since the end of September.

“I just read your story on foxnews.com. I lost my mom to cancer that spread to her brain. She didn’t have the chance to try other treatments. Let’s send a message to insurance companies that life is valuable and should be fought for! Your family will be in my prayers,” wrote GoFundMe commenter Devon Swanson.

If you also want to support Connor, check out the link to the GoFundMe page here.

Connor has been receiving treatment at St. Jude’s since the end of September.