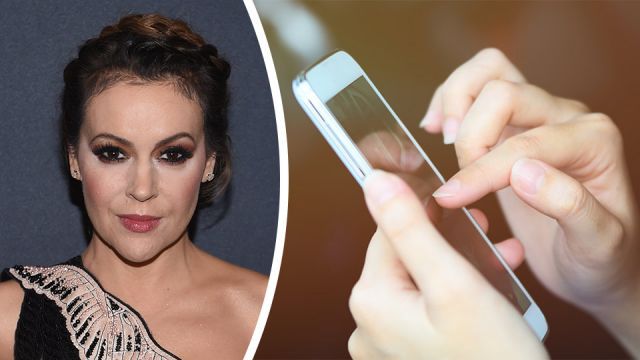 Women are flooding Twitter and Facebook with the hashtag #MeToo as part of a spontaneous campaign to reveal the scale of sexual harassment and assault. It started yesterday afternoon when actress, producer and activist Alyssa Milano tweeted, “If you’ve been sexually harassed or assaulted write ‘me too’ as a reply to this tweet.”

At the time of writing — just 18 hours later — 37,000 people had replied to her Tweet. Many more people have taken up the hashtag and posted on Twitter and Facebook. The hashtag has been used more than 200,000 times in less than 24 hours.

If you’ve been sexually harassed or assaulted write ‘me too’ as a reply to this tweet. pic.twitter.com/k2oeCiUf9n

Since then, Twitter suspended actress Rose McGowan’s account, after she was critical of Weinstein, and reportedly Tweeted someone’s personal phone number while discussing an alleged assault against her. Then on Friday, some users planned a boycott of Twitter for a day, to highlight the way women are often silenced.

However, women like Amy Siskind, president of women’s advocacy group New Agenda, said they didn’t feel like “another quiet day.” That saw #womenwhoroar take off over the weekend, joined eventually by #MeToo.

The trend has carried over to other languages, with Spanish speakers using #YoTambien, and French speakers using #balancetonporc (rat on your dirty old man). Many women have included their particular stories of rape, workplace harassment, street harassment and sexual assault.

To all the women sharing stories of sexual assault and sexual harassment, thank you for your bravery to speak up. You are not alone. #MeToo

I hope people remember that behind every public declaration of #metoo are countless women who can’t say it, for whatever reason

It would probably be easier to count the women and girls who have never been sexuelly harassed. #MeToo

Only a few know my story but no one will ever know how much it has and always will affect me. It will be apart of me and who I am #MeToo

#MeToo This isn’t about gaining sympathy, we want people to realise the magnitude of sexual assault. It shouldn’t be this common.

I’m genuinely shocked by the prevalence of assault and harassment women face. I’m not personally #metoo affected and am forever thankful.

I was too scared to speak up because I was afraid no one would believe me or consider it sexual assault because he was my husband.. #metoo https://t.co/BU5bN1N244

#MeToo. I’ve been assaulted and harassed (like literally every woman ever) and I still questioned whether it counted.
It counts. Always.

I have never seen anything so amazing as what we started today with #MeToo. This is the beginning of a revolution. Strength and compassion.