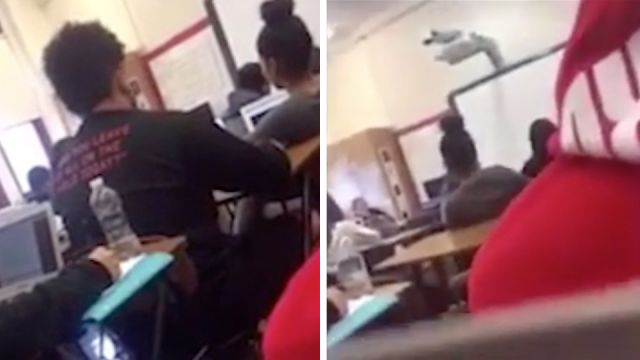 A Cliffside Park High School teacher in New Jersey is facing intense backlash after she was filmed telling a Spanish-speaking student to “speak American.”

The student, Yennifer Pinales, is a 17-year-old who is fluent in both Spanish and English. She believes that by knowing two languages, it will help her greatly in life. She thinks it’s a shame that her teacher doesn’t understand that.

Take a look at the video:

According to Pinales, the professor was upset with her speaking Spanish and told her to practice more English.

Pinales reportedly moved to the United States from the Dominican Republic nine years ago and claims she doesn’t need to practice her English, since she speaks it fluently. As seen in the video above, Pinales claims the teacher is being racist.

At Cliffside Park High School, many students struggle with English and the faculty encourages all students to practice English. However, Pinales chooses to speak Spanish because she can. The student body at the school is quite diverse and a large number of them immediately reacted to the teacher’s comments.

As seen below, several students have planned a walk-out to protest.

“I just want a public apology from her,” says Pinales. “I’m not asking her to lose her job. And if she doesn’t feel comfortable with people who speak a second language, then she should go somewhere else.”

On Facebook, some alumni are calling for the board of education to investigate this “discriminatory” action and the claims from the bilingual student. Others are defending the teacher by claiming that she is a “great person” and a “wonderful teacher.”

Some people are also claiming that English should be spoken in a class taught in English “out of respect for the teacher.”

Check out more of the mixed reaction:

Hooray for this teacher! We are the United States of America Should not be an “issue” to speak English‼️ https://t.co/uI78oZFaYd

I thought kids needed to take a second language to graduate. I think these kids are ahead of the curve.

Currently, Pinales and her parents have yet to hear from the school for their response.

What do you think about the situation? Was this teacher in the wrong? Should Pinales have been speaking English? Let us know!