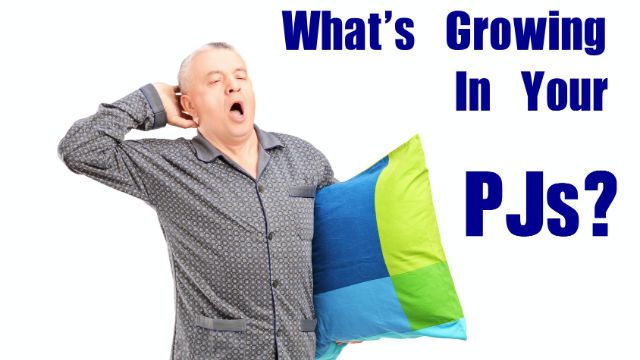 While most people have enough common sense not to wear undergarments more than one day in a row, many get sloppy about things like pajamas. You may not realize it, but wearing your pajamas for several days between washes can cause some hygiene issues.

Ergoflex, a British mattress company, recently conducted a poll of 2,500 people between the ages of 18 and 30 regarding their sleep-related habits. They found that, on average, men wear the same pajamas up to 13 nights before washing them. Surprisingly, women wear the same set of night clothes for up to 17 nights between washings.

When asked about the reasons behind the long stretches between washes, 54 percent of the women said they lost track of how long it was, because of switching between different pairs. The top reason given by 73 percent of men was that they weren’t responsible for doing the washing and wore whatever was handy.

With regard to hygiene concerns, 50 percent of men and 41 percent of women explained that if they didn’t detect a bad smell on their pajamas, then they didn’t feel the number of times they wore them was an issue.

Imagine the state of the sheets

It is not a large leap of the imagination that if pajamas are not being washed regularly, then the sheets and other bed linens probably aren’t being kept up with either. Even if they are washed, by sleeping in them with unclean pajamas, sleepers are reintroducing potential hygiene issues.

Considering that humans are shedding skin cells all the time, and those cells are full of microorganisms, it would be very possible to end up with bacterial infections. Everyone has bacteria organisms in their skin, their gut and other parts of the bodies. E. coli in the bowel is just one example.

Usually this is not an issue, but if those bacteria are transferred to other parts of the body where there are cuts, bruises, or natural openings like the urinary tract, it could lead to a serious infection. Besides E. coli, many humans also carry staphylococcus bacteria and even MRSA, which can be highly difficult to treat.

A standard wash cycle may not be enough

If pajamas have been worn for two weeks or more, then there are going to be a vast number of microbes present on them. When they are thrown into the wash, some of those microbes will likely be transferred onto other clothing that is in the same wash load. So, if they are washed with underwear, sheets, and other items that are worn against the skin, you could be looking at a serious health risk.

While washing does get rid of many microbes, when there are such a large number present it is unlikely that one standard wash will get rid of them all. If the items are heavily soiled, consider a second wash.

However, washing items in hot water, with an organic detergent and a half-cup of vinegar, and then machine drying them, will typically kill any virus and bacteria in question.