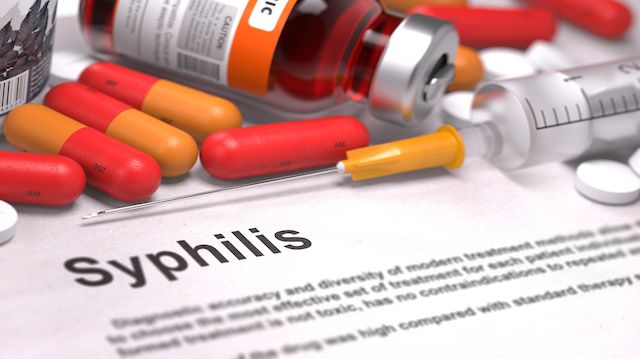 According to the U.S. Centers for Disease Control and Prevention (CDC), data shows that between 2012 and 2013, incidents of primary and secondary syphilis infections increased by 10 percent.

Those figures are twice as high as they were for 2001. The highest concentrations of syphilis infections are being found in Baltimore, Los Angeles, Portland, Atlanta, Miami, Detroit, Orlando, San Diego, San Antonio, and San Francisco.

Cases of infection in the San Francisco Bay Area doubled from 438 in 2009 to 814 in 2013. Not only did cases increase by 32 percent between 2011 and 2014, but in the last few months up to 15 cases of ocular syphilis were reported. Ocular syphilis is a very serious complication that can arise when the disease is left untreated, and may ultimately lead to blindness. Cases of ocular syphilis have been found in California and Washington state according to an alert from the CDC. Most of these particular infections were found in HIV-positive men who had engaged in sex with men.

Easy to treat, but hard to detect
Syphilis can be spread by sexual contact or from a pregnant mother to her unborn fetus. Thankfully, it can be easily treated with antibiotics, but the problem lies in the detection of it. Because the early-stage symptom of syphilis is a sore, or chancre, that takes three weeks to appear, it may be undetected and spread to others in the meantime. Not to mention that symptoms can disappear for a while, and as a result some people may falsely assume it is gone.

Syphilis has been a problem in poor countries for some time and has led to pregnancy complications numbering in the hundreds of thousands. However, the continuous rise in infections here in the U.S. is drawing real attention from concerned health officials. 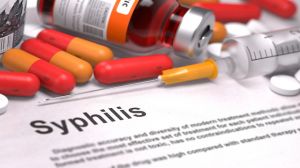 “There are a number of people who are on networks disclosing their HIV status, which we support. And for those people, they are choosing to have condomless sex if both partners know that they have HIV,” said Jay Laudato, executive director of the Callen-Lorde Community Health Center. “That’s something that’s been happening for quite some time. And it absolutely does lead to increased STIs.”

Some people blame the presence of Truvada, a PrEP or pre-exposure prophylaxis, used as a prevention option for people that may be at a high risk of exposure to HIV. As explained by Michael Weinstein, president of the AIDS Healthcare Foundation, “The CDC’s ill-advised strategy of mass treatment with Truvada poses a significant risk to the condom culture, which while it has eroded, has still prevailed among gay men for three decades.”

“I think there’s a subtle message that condom use is not that important any longer,” said Weinstein.