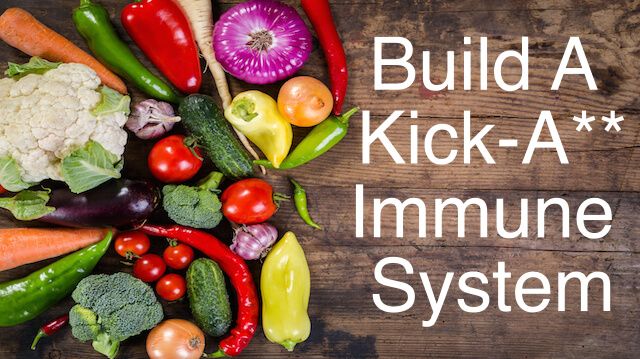 Are you tired of feeling like you get sick from every cold and flu bug that passes your way? Time to put an end to germs and lower your risk of disease by building yourself a kick-ass immune system with these powerhouse foods.

1. Sweet potatoes
Not to be confused with yams, (yes, there is a difference), this amazing vegetable is one of the healthiest foods in the world. It can help prevent the development of diabetes and minimize the effects of secondhand smoke.

Because it contains vitamin A and the antioxidant glutathione, it can enhance your body’s metabolism of nutrients and boost the overall health of your immune system. It also helps protect you against stroke, heart attack, cystic fibrosis, cancer, HIV, liver disease, Alzheimer’s and Parkinson’s.

“Vitamin A plays a major role in the production of connective tissue, a key component of skin,” explained David Katz, M.D., director of the Yale-Griffin Prevention Research Center in Derby, Connecticut.

2. Yogurt
The probiotics in yogurt have been scientifically shown to enhance digestion and improve your immune system. A study conducted by the University of Vienna in Austria revealed that consuming 7 ounces of yogurt daily was equally effective as oral supplements when it comes to boosting the body’s immunity.

Yogurt also contains vitamin D, which has been associated with a decreased risk for developing colds and flu. Just be sure that you are choosing high-quality and organic varieties.

Chilis contain a high concentration of beta-carotene, which is converted into vitamin A in the blood to be used for fighting off infections. They also contain capsaicin that helps to decrease inflammation. Findings from a study published in the journal Cancer Research revealed that half a chili pepper a day helped reduce the chances of developing prostate cancer.

4. Olive oil
Olive oil is known to have anti-inflammatory and antibacterial properties. In a study by the Food Biotechnology Department at the Instituto de la Grasa in Seville, Spain, scientists used olive oil to test its antibacterial properties against eight strains of Helicobacter pylori. H. pylori is known to cause different types of gastric cancer and is linked with peptic ulcers.

Findings of the study showed that olive oil had very strong bactericidal activity against the H. pylori strains, including three forms that are currently resistant to antibiotic treatment.

5. Garlic
The active ingredient in garlic is allicin, which has been shown in studies to fight bacteria and infection. In a study by British researchers, it was found that participants who took garlic for 12 weeks were two-thirds less likely to fall victim to a cold. Separate studies have also linked a weekly consumption of six garlic cloves with a 50 percent reduced rate of developing stomach cancer, and a 30 percent decreased rate for colorectal cancer.

6. Oats and barley
The findings of a Norwegian study revealed the beta-glucan found in these grains has antioxidant and antimicrobial properties that are even stronger than those found in echinacea. When the grains were fed to animals, they were less likely to be infected with herpes, influenza, and anthrax. In humans, it enhanced the performance of antibiotics, sped up the time needed for healing wounds, and boosted immunity.

7. Black and green tea
Research has shown that green tea contains a powerful antioxidant EGCG that decreases the risks for developing most kinds of cancer. As for black tea, it was discovered through a Harvard study that drinking five cups a day for two weeks produced 10 times more virus-fighting interferon in the participants’ blood than was found in those who drank placebos. The reason for the immune system boost is the amino acid L-theanine that is found in both black and green tea.

“The phytonutrients in tea also support the growth of intestinal bacteria,” says Susan Bowerman, assistant director of the Center for Human Nutrition at the University of California, Los Angeles.

“Specifically, they inhibit the growth of bad bacteria – E. coli, Clostridium, Salmonella – and leave the beneficial bacteria untouched.” As Bowerman further explains, a whopping 70 percent of a person’s immune system is located in their digestive tract.

8. Fermented foods
According to Dr. Joseph Mercola, D.O., one of the most well-known fermented foods is kefir. The use of this cultured, enzyme-rich food dates back to ancient times. It is host to an entire cosmos of microorganisms that work to strengthen your immune system and balance the inner ecosystem of your digestive tract.

The good bacteria in fermented foods enhance the immune system functions in your digestive tract, which is your front line of defense from invading pathogens. It also assists the body in producing antibodies for immune support.

9. Wheat germ
Not only rich in fiber, wheat germ is loaded with vitamins and proteins, as well as zinc and choline. The protein hydrolysates it contains are proven to increase the antioxidant activity that destroys free radicals. It has also been shown to interrupt glucose metabolism that could be related to cancerous cell activity.

Research published in the Journal of Leukocyte Biology revealed that omega-3 fatty acids can improve the functioning of the body’s immune system cells. Other good sources besides sardines are fresh-caught wild salmon, trout, and tuna. 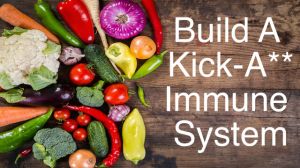 12. Chicken soup
Turns out your grandmother’s sworn cold remedy of chicken soup may have some scientific basis to it. Yes, it can soothe a sore throat and help boost your liquid intake, but it can also benefit your airways.

A study by researchers at the University of Nebraska discovered that chicken soup can impede the accumulation of inflammatory white cells. This could prevent the development of a cold by inhibiting the buildup of these cells inside the bronchial tubes and reduce congestion.

You can increase the immunity boost of this soup by cooking your homemade batch with garlic, carrots, cilantro, onions, and oregano.

13. Broccoli
Broccoli is an incredible immune system boosting food because it contains glutathione, vitamin A, and vitamin C. These nutrients protect the body against problematic free radicals and boost the body’s antioxidant protection.

A study published in the European Journal of Nutrition revealed that taking a daily oral supplement of 1000 mg of glutathione increased the glutathione levels found in the blood stream, and boosted overall immune system strength.

To get the maximum benefit of glutathione and vitamin C, it is best to consume foods in their raw form.

14. Lean beef
Lean beef is abundant in zinc, which is important in the development of white blood cells. These cells recognize and destroy bacteria, viruses, and other invading foreign bodies. The most common dietary deficiency of American adults is zinc.

“When you take away zinc, the cells that control inflammation appear to activate and respond differently; this causes the cells to promote more inflammation,” says Emily Ho, a professor and director of the Moore Family Center for Whole Grain Foods, Nutrition and Preventative Health in the OSU College of Public Health and Human Services.

15. Pomegranates
Pomegranate juice has been shown to reduce the risk of developing most types of cancer thanks to its high concentration of polyphenols. These polyphenols, or ellagitannins as they are also called, are what give the fruit its color.

A study by scientists at UCLA discovered that the juice of the pomegranate can slow the growth of prostate cancer cells by a factor of six.

16. Figs
Figs are rich in manganese, potassium, and antioxidants. They inhibit the invasion of pathogens and support the proper levels of pH in the body. The fiber content in figs is very effective at lowering blood glucose and insulin levels.

Figs also have particularly high content levels of insoluble fiber that is very beneficial to cardiovascular health and in the prevention of some cancers.

17. Tomatoes
The lycopene found in tomatoes is a powerful antioxidant and helps to protect the DNA of immune cells against oxidative damage from free radicals. Lycopene can also help protect the body from some degenerative diseases.

As an added benefit, it turns out tomatoes are really great for your cardiovascular health. A study from the University of Cambridge, U.K., looked at the effect of lycopene on patients with cardiovascular disease. They found that a 7-mg oral lycopene supplement improved and normalized the endothelial function in heart disease patients.

18. Ginger
Many people confuse ginger as being a root, but it is actually a stem. This stem is loaded with living nutritious compounds to boost your health. One of the most important is gingerol that has been shown to suppress cancer, especially in the colon.

A study published in the Official Journal of the Balkan Union of Oncology revealed that ginger can activate the immune system and prevent cancer from developing. It can also prevent the spread of tumors and kill existing cancer cells in the body.

19. Cinnamon
Cinnamon is very rich in antioxidants that help suppress blood clotting, as well as the growth of bacteria. It has also been linked with stabilizing blood sugar levels, which can help decrease the risk of type 2 diabetes.

Research published in the journal PLOS One, revealed that high doses of cinnamon in mice significantly boosted the amount of T regulatory immune system cells and decreased inflammation.