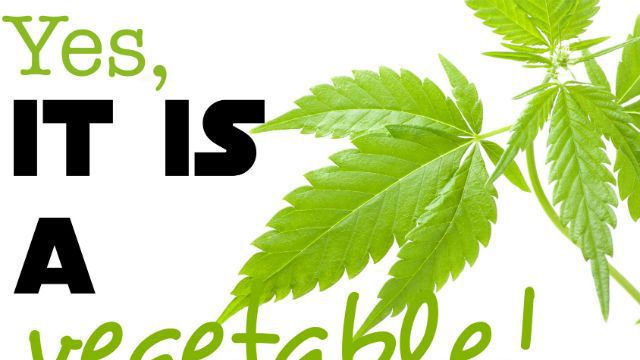 We talk a lot about the benefits of juicing, including the concentrated serving of potent antioxidants and vital nutrients that you get when you consume fresh juice made from organic produce.

Juicing is an excellent way to help your body detoxify, build up your immune system and supercharge your health. We have given recipes for juice made with carrots, ginger, kale, spinach and such, but we want to address another potent juicing ingredient that you should, if you can, consider tossing in your juicer, Cannabis Sativa L. (aka marijuana).

Cannabis Sativa L. may well indeed be one of the most persecuted plants in the history of plants. Without crossing the line into drug wars and heavy politics, it is easy to see the plant for what it truly is, naked in all of its essence. When one looks at both the scientific as well as anecdotal evidence, adding a few leaves to your morning juice seems like nothing short of a fabulous idea.

All plants, according to author and speaker Michael Pollan, have an astounding ability to nourish us, poison us, calm our nerves, delight our senses or even change our experience of consciousness. Cannabis Sativa L. is just one of thousands of plants that are packed with beneficial nutrients and therapeutic value, that has been, up until only recently, all but ignored.

Cannabis is a vegetable

Vegetables are known as “herbaceous plants grown for an edible part, usually eaten as part of a meal.” Parts of a plant used may be the leaf, root, stem or flower. We enjoy some vegetables raw, others cooked.

Heavily involved in cannabinoid research, Courtney has treated more than 7,000 patients using cannabis as medicine. He is presently working passionately to educate both laymen and professional health practitioners regarding the benefits of this amazing plant, and the need to preserve strains with unique medicinal profiles while restoring safe access to cannabis worldwide.

Raw cannabis contains a highly digestible globular protein which is balanced for all of the essential amino acids. It contains the ideal ratio of omega 6 and omega 3 fatty acids, and is the only known source of essential cannabinoid acids. According to Dr. Courtney, over 7 billion people worldwide would benefit from access to cannabis as a functional food.

Courtney is not the only one advocating for a restored appreciation of this ancient plant. Dr. Donald Abrams is chief of hematology and oncology at San Francisco General Hospital and a professor of medicine at the University of California, San Francisco.

Dr. Abrams has conducted in depth research on the medical use of cannabis, and says: “If cannabis were discovered in an Amazon rainforest today, people would be clambering to make as much use as they could of all of the potential benefits of the plant. Unfortunately, it carries with it a long history of being a persecuted plant.”

There are over 480 natural components within the Cannabis Sativa plant – more than 70 have been classified as “cannabinoids,” unique chemicals to this plant. Perhaps the best known, or at least most talked about, of these chemicals is THC, the substance that is mainly responsible for the psychoactive effects of the plant. However, it is the lesser known compounds, CBD and THCV, found in the leaves and tri-chrome covered flowers of the raw plant, that deliver the nutritional and therapeutic punch.

The great news is that these substances are non-psychoactive. In fact, these non-psychoactive compounds found in the buds and the leaves are loaded with antioxidants. CBD has been found to be a strong anti-cancer compound that has the ability to prevent and reverse a number of chronic illnesses.

The human body contains a built-in endogenous cannabinoid system, which comes complete with cannabinoid receptors. Therefore, inputting CBD from marijuana can help to normalize the body’s functional systems, including communication between cells and immune system function.

In the December 2004 issue of Scientific American, an article addressed a molecule in cannabis that was capable of two-way communication with nerve cells. According to the article, one-way traffic to nerves is the main cause of inflammation in the body.

When immune cells are constantly attacked and there is no communication with the nerves to tell them to ease up , inflammation becomes chronic and this leads to a host of other problems. When cannabinoids are added to the mix, they work to provide this two-way conversation and shut down the internal chaos.

A good way to think about CBDs is to think of them as regulators, bringing out-of-whack systems back into order. This is what makes it so good for so many conditions. Recently, the FDA approved CBD, and the federal patent for CBD compares it with vitamin A and vitamin E, and shows that CBD is more powerful than either of these.

People who have compromised immune systems, chronic inflammation, cellular dysfunction and even cancerous cells can benefit by consuming CBDs, according to Dr. Courtney. And, the best way to benefit from the CBDs in cannabis is to juice raw marijuana leaves and buds.

Russo notes that people who may not produce enough cannabinoids on their own naturally might be at a higher risk of such illnesses as glaucoma, migraines and irritable bowel syndrome.

Kristen, who tried smoking medicinal marijuana, did not have nearly the same results as she did when she began juicing. Since she began juicing she is off of all of her antibiotics, painkillers and anti inflammatories, and has even had a child which her OBGYN felt would have been originally impossible with her history of endometriosis.

A two-year old child who had undergone all western treatment possible for brain tumors – including a 24 hour surgery, chemotherapy and radiation – was given little hope of surviving. As a last resort, the child’s parents started juicing raw cannabis leaves and giving her a shot glass a day. After one month, the brain tumors shrank and stopped growing.

Although Dr. Courtney acknowledges that smoked cannabis can be used as a medical therapy, he believes that the healthiest way to benefit from this plant is to use it in a preventative manner in its raw form. When cannabis is heated – smoked or cooked – 99 percent of the benefits are passed over.

Courtney claims that cannabis is “the most important vegetable on our planet” because of its ability to boost the immune system, act as an anti-inflammatory, improve bone metabolism and boost neural function.

How can I benefit from juicing raw cannabis?

Even if you are otherwise healthy, you can still benefit from juicing raw cannabis. Here are seven reasons why including it in your daily health regime may be a good idea.

If you live in a state where you have legal access to fresh raw cannabis, or can grow your own, Dr. Courtney recommends the following:

There are presently twenty American states that have recognized the therapeutic value of marijuana, although the federal government continues to classify it as Schedule 1 drug with no “accepted medical use.” This is in spite of the fact that they have been funding research on marijuana for years.

Those advocating for its use are concerned that as long as it is classified as a drug, many millions of people will miss out on this amazing superfood. Meanwhile, groups such as Cannabis International and others continue to educate the public and speak to as to how legalization could, in fact, change the world.