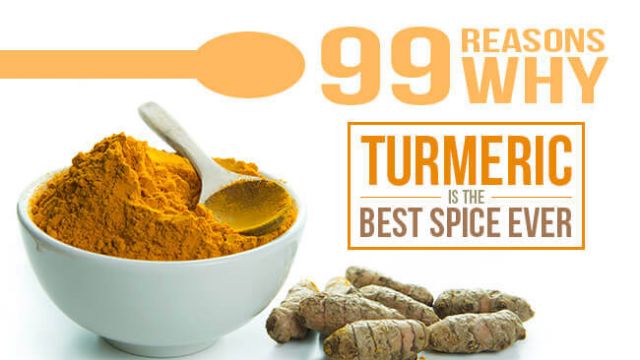 Turmeric is a herbaceous herb (also known as Curcuma longa) that is a member of the ginger family, which has been used throughout India and the Orient for thousands of years. Historical records note that ancient Polynesians took turmeric with them when they sailed across the Pacific Ocean to Hawaii where the spice is still used today and known as ’olena.

In India, this golden spice has long been called “holy powder,” and is used extensively to treat infections, wounds and a myriad of other health problems. Its healing power was once thought of as only a folktale; however, modern research is now confirming what the people of India and many parts of Asia have known for thousands of years — turmeric is a spice you don’t want to pass up.

Scientists are finding an astonishing array of antioxidant, anticancer, antiviral, antibiotic, antifungal and antibacterial properties. As an immune system booster, turmeric is 5 to 8 times stronger than vitamin C and E.

Studies show that curcumin, the principal curcuminoid of turmeric, inserts itself into cell membranes where it does a little house-cleaning and reorganizing, adding vibrancy to the cell itself. Suddenly a disorganized cell becomes organized, allowing information to flow through it so it can function more effectively. The result of this action increases the cell’s resistance to infection and malignancy, which can keep a number of serious conditions at bay, including the following:

Cases of the four most common cancers found in America are very low in India where turmeric is a food staple. These cancers include colon, breast, prostate and lung, occurring ten times less frequently in India than in the U.S. Prostate cancer, which is the most commonly diagnosed cancer in men in the United States, is hardly ever found in Indian men.

Studies that have examined the medicinal impact of curcumin have found that it keeps cells from changing from normal to cancerous and stops the spread of existing cancerous cells.

Furthermore, it works in conjunction with the body to destroy existing cancer cells so they are unable to spread to the rest of the body. Liver function is enhanced in those that use curcumin regularly, and it appears to prevent additional blood from reaching cancer cells, which retards their growth.

The University of Texas M.D. Anderson Cancer Center, reports that curcumin blocks the pathway in the body that is required for melanoma and other cancers to develop. In a laboratory setting, curcumin actually causes cancer cells to commit suicide. In addition, it has been found to shut down the protein needed to induce an inflammatory response.

Curcumin is probably best known for its strong anti-inflammatory properties. Inflammation is a normal and beneficial process that occurs when white blood cells and chemicals in the body join up to protect you from foreign invaders such as bacteria and viruses. So, some level of inflammation is good and required for health. However, the inflammatory response often gets out of control.

This happens when the immune system triggers an inflammatory response without a real threat. This can easily cause excess inflammation to stay in the body; a condition that is linked to allergies, heart disease, autoimmune disease, cancer (discussed above) and other serious medical conditions. Excess inflammation can also cause irritation to tissues, which translates into the pain, swelling and redness so often seen in people suffering from osteoarthritis.

According to one study, patients who suffered from osteoarthritis who added 200 mg of curcumin daily to their treatment plan, had a significant decrease in pain and much improved mobility. The control group, who received no curcumin, had no improvements.

In another study, turmeric extract blocked the inflammation pathways which prevented the protein responsible for swelling and pain from triggering.
So many people with inflammation-induced pain take non-steroidal medications such as Tylenol for relief, however, chronic use of these medications has been associated with some rather serious side effects, such as cardiovascular problems, kidney and liver damage as well as gastrointestinal problems.

Besides those I have mentioned above, turmeric has so many other benefits it is often referred to as the most powerful spice on the planet. Here is just a glimpse at what it can do: 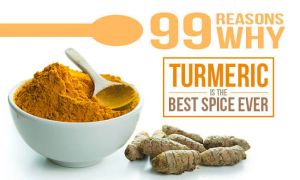 Even mainstream health circles recognize the power of turmeric. Web MD cites that the herb is useful for the following conditions:

I have personally used turmeric for a number of things, including as a natural dye for Easter eggs, t-shirts and play dough. When combined with aloe vera, it can help to ease the pain and itch caused by poison ivy, bug bites and chicken pox.

I love to make a super delicious dip for veggies using organic yogurt, turmeric, dried onion, and salt and pepper. I have also combined turmeric with raw honey for an amazing facial exfoliator paste. Living out in the west and loving my sandals like I do, my feet take a beating. To relieve dry and cracked heels, I mix coconut oil and turmeric and let it sit on my feet for about 15 minutes before having a shower.

Here are some more ways you might consider using this highly versatile and potent spice:

If curcumin is the super power in turmeric, should we take it alone or with the spice in its whole state?

Studies have been performed to determine whether turmeric or curcumin is more effective. The results supported the hypothesis that “a crude extract of turmeric is more effective than the purified compound curcumin in curing human ailments” because it offers the full spectrum of curcuminoids.

Another study also emphasized the role of synergistic effects of other constituents of turmeric extract on the antioxidant activity of curcumin.

As you can see, using the complete turmeric root is better than removing the most active compound and consuming it in an isolated state. The whole root contains co-active molecules, ones that work together for the most benefit.

It’s also worth noting that there are ways to make your complete turmeric even more effective with other foods that help the body absorb it.

Black pepper (with its active chemical piperine) is one, and cayenne pepper (capsaicin) is another. One study showed that turmeric and cayenne pepper were each individually beneficial for the reduction of cholesterol oxidation, liver toxicity and inflammation, but the beneficial effect was greater when they were consumed together.

Another important consideration is that curcuminoids are fat soluble. Any fat soluble nutrient or vitamin should always be consumed with another food containing fat, so that it can be most effectively absorbed.

The best way to absorb curcumin is to combine a tablespoon of curcumin powder with 1–2 egg yolks and two teaspoons of melted coconut oil. This will emulsify the powder and enhance absorption.

Use organic and fresh turmeric liberally in the kitchen. It has an earthy and peppery flavor.

If you would like to do some more research of your own, visit PubMed’s extensive database of research on turmeric… the best spice ever. You will be amazed!