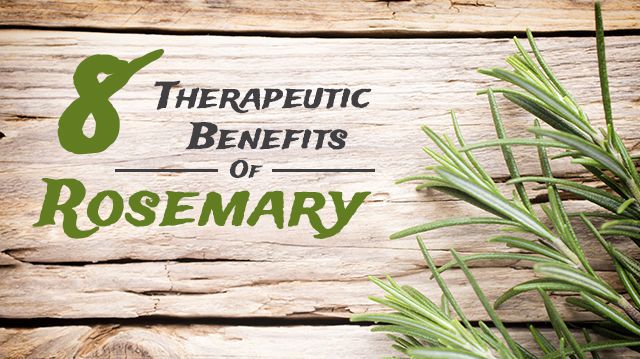 As soon as you pick fresh rosemary, its natural, pine-like aroma floods your nostrils. Once it hits your taste buds, you experience its potent yet delicious flavor. Native to the Mediterranean, rosemary is one of the oldest medicinal herbs and has been used throughout history as a means to enhance memory.

Scholars within ancient Greece used to wear wreaths of rosemary as they wrote exams, believing the herb would improve memory recall. Today, it continues to be used based on its wide range of therapeutic benefits. Now that spring has officially sprung, it’s time to invite rosemary into your homegrown herb garden. Here are eight key therapeutic benefits of rosemary:

This is perhaps the most well-studied benefit, as rosemary has been used to boost memory capacity for thousands of years. Researchers have found that the active compound in rosemary, known as 1,8-cineole, essentially increases acetylcholine levels — the neurotransmitter that enhances memory and learning.

Within one study, published in Therapeutic Advances in Psychopharmacology, healthy volunteers were examined based on the potential relationship between rosemary aroma, more specifically 1,8-cineole and cognitive function. In this blind study, volunteers performed both mathematics and visual processing tasks, and were told that the study was about “the relationship between mood and cognitive performance.” When the participants asked about the rosemary scent, researchers told the them that it was related to a previous study.

The study reported that performance on cognitive tasks improved for the rosemary group in comparison to the control volunteers. This was seen in terms of accuracy and speed, meaning that rosemary aroma may affect cognition through different neurochemical pathways — maybe ancient Greek scholars were not that far off.

Although enhanced cognitive function most certainly relates to the aging brain, the rate at which your brain cells age will determine your level of neurological functioning. Consuming rosemary is believed to protect your brain by increasing blood flow, providing brain tissue with nutrients and oxygen. Containing carnosic acid, rosemary also offers potent antioxidant properties.

Protecting against free radicals, carnosic acid reduces brain damage caused by amyloid plaques — the hallmark of Alzheimer’s disease. A study published in Cell found that when rats were pre-treated with carnosic acid prior to a lesion, cellular death was reduced in the hippocampus. Researchers concluded that carnosic acid may protect against beta amyloid-induced neurogeneration.

Researchers studying the effects of rosemary in relation to cancer have found it may inhibit tumor growth. Rosemary’s been shown to reduce the formation of cancer cells by preventing the replication of cancerous cells. This has been documented regarding prostate, breast and colon cancer cells.

When studied in mice, a study published in PloS ONE found that when rosemary extract was administered orally, tumor growth was suppressed by 46 percent in comparison to mice not receiving rosemary treatment. The is especially significant because many food products now use rosemary extract as a natural preservative.

Due to its anti-inflammatory properties, rosemary has been studied in order to treat symptoms of arthritis. One 2003 study, published in The Journal of Rheumatology, found that herbs containing rosmarinic acid, including rosemary, inhibited arthritis progression in mice.

Rosemary has the ability to stimulate both the nervous and circulatory system, benefiting a number of systems. Since oxygen- and nutrient-rich blood circulate more efficiently, rosemary is believed to promote hair growth, boost immunity, increase healing speed and improve brain function. By improving blood flow, rosemary is also ideal for individuals with high blood pressure.

Based on rosemary’s anxiolytic effects, it is also able to reduce anxiety levels through aromatherapy. When mice were treated with rosemary tea, they exhibited both anxiolytic and antidepressant behaviors. If you have a long, stressful day at the office, add rosemary and lavender oil to a bath to help you unwind and relax.

When rosemary is consumed internally, it may reduce stomach problems such as dyspepsia, cramps, constipation and bloating. When inhaled, it can relax muscle spasms that may contribute to digestive discomfort. Rosemary may also benefit issues within the colon based on its disinfectant properties.

By stimulating the production of bile, rosemary can help better neutralize acidic food from the stomach. In turn, it is a natural supportive remedy for heartburn. If you’re suffering from indigestion, a rosemary, ginger, sage and oregano tea can help target stomach issues.

As mentioned, rosemary is high in rosmarinic acid — reducing the severity of allergies. Due to this herb’s antihistamine properties, it can also help individuals with asthma. Since histamine, a compound related to immune response, plays a role in airway inflammation, levels are typically elevated within asthma patients.

Not only does rosemary offer antihistamine effects, but it also targets the direct inflammation that contributes to symptoms of asthma. Researchers from a study published in the International Journal of Academia Research concluded that rosemary may be an effective treatment for asthma; after administering rosemary, oxidative stress was reduced in bronchial asthma patients.

Try incorporating rosemary into your daily life to experience its amazing benefits.