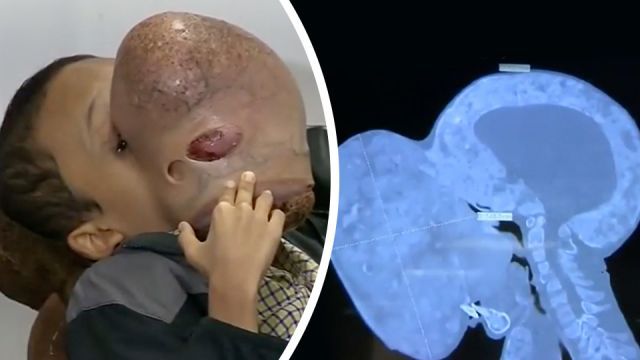 A 14-year-old boy suffering from a rare condition called polyostotic fibrous dysplasia, which causes scar-like tissue to develop instead of bones, has passed away just days after surgery.

For almost 12 years, Emanuel Zayas was battling the condition. Once doctors successfully removed the basketball-sized tumor, initial signs were encouraging. However, due to kidney and lung complications after surgery, he passed in the intensive care unit at Jackson Memorial Hospital in Miami, Florida.

“Our condolences and prayers for Emanuel’s family and the loss of a very brave young man,” said Dr. Robert E. Marx, a surgeon at Jackson Memorial Hospital. “Another angel has arrived in Heaven.”

Here is a photo of Emanuel Zayas:

**WARNING- Graphic**
This is 14 year old Emanuel Zayas. That’s a 10 pound tumor on his face. Thanks to the doctors at Jackson Memorial Hospital, it will be gone, but even after the surgery the young man has a long way to go. I have the details on @nbc6 pic.twitter.com/rZgHxCaS5p

Could doctors have saved him sooner?

Doctors in Cuba hesitated to treat Emanuel and that allowed the tumor to grow so large. Medical missionaries that were visiting Cuba learned about Emanuel and took X-rays, which they then showed to Dr. Max at a conference he was at in the country.

Despite several doctors not knowing what Emanuel was going through, Dr. Marx knew immediately. He knew he had to help. Emanuel and his parents flew to Miami in November on a humanitarian visa after meeting missionaries from the humanitarian non-profit Reel Life International. “This was probably the most technically difficult surgery I have ever done,” Marx said. “The tumor was exceedingly vascular, and we were controlling bleeders every minute.”

A picture of Emanuel with his family:

As seen in the picture above, the tumor was completely obstructing his vision, blocking his nose, and it was extremely difficult to eat. According to doctors, if it wasn’t removed, it would have eventually broken his neck.

Here is a video of the Zayas family and doctors at Jackson Memorial Hospital prior to surgery:

“I am saddened by the fact that we are losing him and that apparently the physiologic stress of the surgery was too much for his compromised anatomy to overcome,” Marx said on Saturday. “Our hopes of saving his life and in doing so would allow him a better quality of life have not been realized.”

Dr. Marx said that Zayas’ family plans on donating Emanuel’s body to medical research in hopes of learning more about the rare disease and helping people across the world who suffer from polyostotic fibrous dysplacia. If you would like to donate to help the family with medical expenses, a GoFundMe page has been set up here.