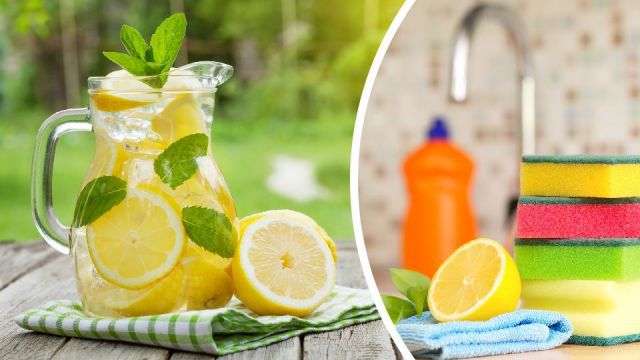 Growing up in a conventional household, I didn’t have much of a grasp of the use of lemons beyond making lemonade in the summer. To be honest, we didn’t even use real lemons for that, we just used the frozen concentrate!

As I’ve become more and more interested in natural holistic living and healthy real-food eating, it’s become abundantly clear that lemons are a priceless addition to a conscious lifestyle.

Have fun joining us for this lemon challenge which will teach you many new ways to use this valuable and multi-talented citrus fruit.

A brief history of the lemon

What we know as a lemon is actually a cross between two other citrus fruits, the citron and the bitter orange. Lemons are native to Asia and were brought to the New World by Christopher Columbus in 1493.

In the 18th century, sailors were given lemon juice to help cure scurvy, even though the existence or effect of vitamin C was not yet understood.

Prior to the 19th century, lemons were mostly grown ornamentally and also used for medicine. As time went on, culinary uses expanded, and lemons are now commonly used in sweet and savory dishes worldwide.

Nowadays, most lemons are produced in California, Arizona, the Mediterranean, South Africa and Australia.

We’re all familiar with the distinctive mouth-puckering flavor of a lemon, and that aroma that makes your mouth water. But did you know that behind these surface attributes, lemons have some amazing health benefits too?

When you smell the sourness of a lemon and begin to salivate, it isn’t just your mouth responding, it’s actually your whole digestive and detoxification system. Your organs begin to produce the substances needed to digest food, including acids and enzymes.

Drinking lemon water is a well-known helpful habit that helps flush your system and supports the organs of detoxification. For example, this study found that lemon juice helped protect the liver in mice.

A carry-on effect from improved detoxification and digestion is, of course, weight loss! Studies with mice have shown that the polyphenols in lemon help fight obesity.

The vitamin C content of lemons is known to play a role in immunity by protecting virus-fighting leukocytes and supporting the production of white blood cells. If you were to consume a whole lemon, you’d get 139 percent of the daily recommended intake of vitamin C.

A 2015 study showed that, of over 100,000 study participants, those who consume the most fruit and vegetables have the highest blood plasma levels of vitamin C, and experience at least a 15 percent lower risk of cardiovascular disease.

Lemons could also have direct cholesterol-lowering effects thanks to the antioxidants and limonoids contained within. A study published in Alternative Therapies in Health and Medicine showed that patients had 20 to 30 percent lower cholesterol after a month of consuming limonin and vitamin E. So that salad dressing made from olive oil and lemon juice is pretty dang healthy after all!

A number of studies have demonstrated that the limonin compound found in lemons is an effective weapon against cancer. Human cancer cells were treated with lemon compounds in this study which found that apoptosis (cancer cell death) was successfully induced. It was also found to be effective against colon cancer in rats.

More research is needed in order to discover the exact mechanism of the anti-cancer action, but in the meantime, why not keep consuming lemons?

The antioxidant content and gentle acid quality of lemon juice is effective in brightening and regenerating skin, removing marks and discolorations. In addition, vitamin C is an important component in the process of collagen production, which we all know is important for keeping skin firm, elastic and youthful.

So now that you’re well-versed in all the amazing benefits of lemons, are you ready to get started with some lemony habits on a daily basis? We’ve put together a varied list of activities you can do with lemons, to improve your health and beauty and take care of your household naturally. Let’s get started!