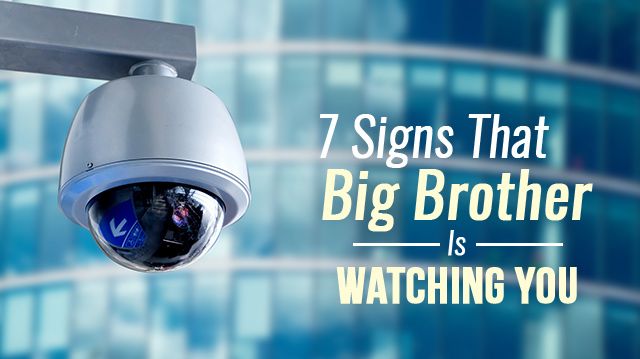 You’re being watched, listened to and monitored through your computer, phone and even TV. And it doesn’t stop there. You’re being told what to eat and what to buy. Whether you know it or not, Big Brother is watching — and here are seven signs that tell you how.

They’re out there watching you. The United States of America has become the United States of Surveillance with cameras on every corner, watching and recording your every move. But that’s no surprise, particularly in response to security concerns after 9/11 and then again after the Boston marathon bombing that took place on April 15, 2013.

There are an estimated 30 million surveillance cameras deployed in the United States, shooting and recording four billion hours of footage a week according to the magazine Popular Mechanics. But it’s not just the US that uses surveillance cameras. London has one camera for every 14 people. Even the most remote area in Britain (Lerwick, the capital of the Shetland Islands) is so heavily monitored that cameras record locals’ movements from almost the very moment they step out of their homes according to the UK’s Daily Express newspaper.

There’s no disputing that cameras at specific, high-crime areas, such as ATM machines or inside convenience stores, are absolutely necessary as a deterrent. Similarly, surveillance cameras in high-profile places that are potential terrorist targets, such as Capitol Hill in Washington D.C., are also an absolute necessity — it’s a sign of the times. But an army of surveillance cameras on every corner of every street is very… “un-American.”

Cameras are usually implemented to reduce petty crime. Yet, despite claims by police, private security and camera technology companies, deterrence has not been proven, according to the Surveillance Studies Center. So then, why are we being so heavily monitored — very 1984, wouldn’t you say?

Days after the Boston Marathon bombing, the US National Security Agency (NSA) was empowered by a secret order, issued by the foreign intelligence court, directing Verizon Communications, a mobile phone provider with 98.9 million wireless customers, to turn over all its call records for a three-month period. This allowed the NSA unprecedented power to snoop on our calls without needing to suspect that any unlawful activity was taking place. Shortly thereafter, data collection of mobile phone records broadened to include 107 million AT&T users and 55 million Sprint users.

After whistleblower and former contractor for the CIA, Edward Snowden, leaked documents, it was discovered that the NSA tapped directly into the servers of nine internet firms as well, including Facebook, Google, Microsoft and Yahoo to track online communication in a surveillance program known as Prism.

In May 2015, the appeals court ruled that the NSA’s data collection was illegal. However, controversy continues to brew, with supporters claiming that it’s a means to fight the war on terrorism. In reality, it’s a blatant lack of respect for citizens’ privacy. Of course, the mass collection of phone records is just the tip of the iceberg when it comes to the NSA’s activities.

Data brokers: they know where you’ve been

We tend to focus so much attention on government snooping that we miss the bigger picture, something we experience each time we log on to our computers — the outright theft of our  private information. While it may be hard to believe that “someone” is out there collecting your most sensitive information, believe it. Data brokering is a multibillion-dollar industry that collects, analyzes and sells your personal information, and without your direct knowledge.

This is Big Brother at its finest. Companies and marketing firms have been gathering information about you for years. They’ve collected your name, where you live, the type of home you live in, tracked your credit card purchases, your friends, and even your weight.

Each day we give away more and more private information online without knowing that it’s being harvested, personalized, and sold to lots of different companies, and even the government.

In the future, Big Brother won’t need to enter your home to bug your conversations, you’ll willingly do it yourself. Well, guess what — the future is now. “Smart” web-connected TVs are here. They recognize your face, listen to your voice, and send information to third parties. Of course, it is possible to disable data collection, but that immobilizes many of the high-tech functions, leaving consumers with a choice of keeping up with technology or keeping their information private.

Samsung apparently warned customers about discussing their personal information in front of their smart television set, says the BBC. But the warning applied to viewers who control their Samsung Smart TV by using the voice activation feature.

Samsung is not the first smart, net-connected TV to run into problems with data collection. According to the BBC, LG TVs also have smart capabilities that gather and process information via a third party.

GMOs: they’re telling you what to eat

The 1973 cult thriller Soylent Green may be closer to reality than we’d like to think. Monsanto, the company that created DDT, PCBs and Agent Orange, has reinvented itself and is now the world’s leader in GMO (genetically modified organisms) technology.

Farmers who contract with Monsanto give up the right to practice farming as they know it, and must abide by Monsanto’s agricultural rules, says the GMO Journal. That means farmers sign away the ancient practice of seed saving. GMO crops touted as the answer to world hunger were developed for pesticide and herbicide resistant crops. The thought was that farmers could increase their yields and decrease their costs. However, this has not proven to be the case, suggests Canadian science broadcaster and environmental activist David Suzuki.

Instead, bugs and weeds have become more and more resistant to chemicals, says Suzuki, leading to increased use of both pesticides and herbicides. What does this mean for society? More spraying means a higher cost to farmers, higher food costs for us, more damage to the environment and more health concerns. Ultimately, Monsanto’s control over farmers is a control over what we consume.

What was once used only for the management of cattle is now being used on humans. The use of microchips in livestock allows farmers to track an animal’s history and helps determine which animals are performing well. Guess what! Human implantable microchips will also track your history, performance and determine if you’ve been… naughty or nice.

Verichip Corp. launched its chip in 2002, giving birth to a massive technology boom. Future marketing will most likely play on the fears of parents and the safety concerns for their children. The chip will reveal the whereabouts of a child and alert parents of immediate danger, says ABC News.

In addition, it will contain all pertinent health information. It will also offer a solution for pesky credit cards, debit cards and even passports. A wave of the hand and you’re through security. Sounds great, doesn’t it! Well, think again.

Big Brother is watching and you might not know it. If you live in certain cities, your movements can be tracked easily by your smartphone signal. Anyone who has a smartphone is aware how these phones push you to leave your Wi-Fi on. Here’s why: Google Navigator and GPS services are more accurate when Wi-Fi is turned on, allowing your whereabouts to be tracked more easily.

Brick-and-mortar stores are also getting in on the action. New technology allows retailers to track your every movement, gather data and monitor your behavior by following the Wi-Fi signals from your smartphone.

Retail monitoring may make for better future shopping experiences, but it just feels a little too much like an invasion of privacy. Don’t get me wrong, I love technology. And by now smartphones, laptops, the Internet, and even smart TVs are so ingrained in our culture that there is no turning back. Yet, when it comes to our basic right to privacy, maybe we need to draw a line in the sand and say enough is enough.