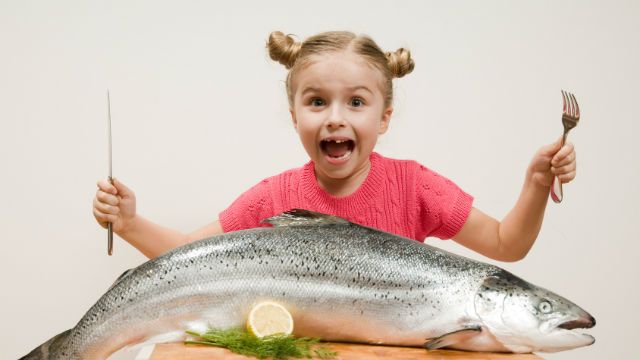 Whether or not to consume fish while pregnant is a confusing question. On one hand, the DHA in fish, which is a long chain omega-3 fatty acid, is good for brain development. However, the mercury which is found in seafood negatively affects brain development.

In an recent article written by Michael Greger, MD, the doctor notes that mercury exposure through fish intake during pregnancy has been found to decrease the size of a newborn’s brain. But, he says, just because they have a smaller brain doesn’t mean they’ll grow up with neurological defects.

A video revealing brain scans found that measuring brain activity rather than just brain size provides a more accurate picture as to how mercury and PCBs affect a growing child. Brains that are exposed to mercury and PCBs, suggest toxicant-related damage to its visual centers. Fish consumption is also believed to increase the risk of children being born with epilepsy.

Dr. Greger notes a 2013 study in which researchers looked at 33 different fish species to see what the net effects of mercury and DHA would have on children’s IQ. For most fish species, they discovered that the adverse effect of mercury on IQ scores exceeded DHA’s beneficial effects. So much, in fact, that he says the US economy may lose 5 billion dollars in economic productivity each year due to the loss of brain power from fish consumption.

For example, pike, swordfish and tuna are some of the worst offenders when it comes to high mercury content. If a pregnant woman ate tuna every day, the DHA from that tuna would add a few IQ points, but the mercury content would cause so much brain damage that the overall effect would be negative, wiping out an average of eight IQ points. Pike and swordfish would be even worse, as those species contain the most mercury.

Salmon, on the low end of the spectrum, may have more positive effects, as DHA is believed to trump the effects of its lower mercury content. Greger notes that the IQ study only took into consideration cognitive damage caused by mercury, and not any adverse effects on attention and behavior deficits or motor function. However, experts believe attention span may be particularly vulnerable to mercury, likely due to the damage that it does to the brain’s frontal lobes. The IQ study also didn’t take into account the relatively high levels of PCBs found in salmon.

For pregnant women who are concerned, Dr. Greger advises not risking the loss of intelligence in your unborn child, and getting DHA from taking microalgae supplements without the contaminants, which provide a brain boost without brain damage.