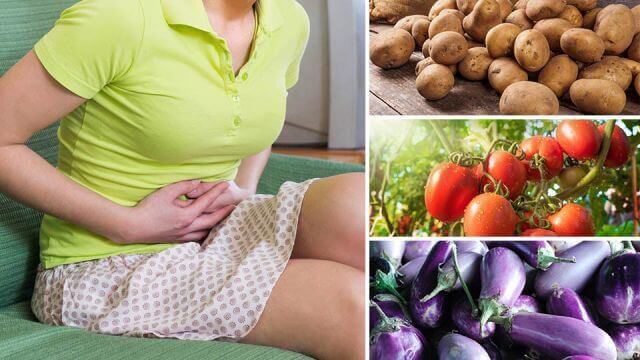 Last week, I was at the supermarket checkout loading an oversized bag of purple, orange and golden sweet potatoes to the conveyor. The lady behind the checkout said something like “what are you planning on doing with all those sweet potatoes?” I responded that I use them in any meal that takes my fancy, from breakfast, lunch and dinner… even to desserts! She replied, “Oh, but don’t you like potatoes?” I explained how I generally stay well away from potatoes, on account of them being a member of the nightshade family.

The bewildered look on her face told me everything I needed to know. I steered the conversation to other matters, remarking upon the unseasonably warm weather over the past few days. She let the matter drop, and I went on my way.

You see, most people don’t tend to think of vegetables or fruit as being members of “families.” An eggplant is an eggplant, a tomato is a tomato and a potato is a potato. Simple as that. But what do these items have in common? They’re all part of the nightshade family!

And knowing the family that your produce comes from is critical to understanding why you might be suffering from food allergies, inflammation, joint pain and any number of other health problems. Certain families, nightshades in particular, have earned a bad reputation over the years… and it’s not without reason.

What the heck are nightshades?

Before I prattle on any longer, you’re probably wondering what the heck nightshades even are. Well, alarming as it might sound, nightshades are everywhere — we’ve based much of our modern cuisine on them. They taste great, make excellent pasta sauce and ketchup, fries and salsa, so it’s not surprising just how entrenched they’ve become in our daily eating habits.

In a nutshell, nightshades are members of the Solanaceae family (the taxonomic name for nightshades). This family includes both edible and non-edible varieties. Here are the key contenders:

There’s certainly a few curveballs in that list. Personally, I was super surprised to see ashwagandha on that list, one of the most powerful adaptogenic herbs on the plant. Thousands of people supplement with this potent herb due to it’s ability to alleviate stress and lower inflammation… perhaps not knowing that could in fact be causing their inflammation.

And then there’s deadly nightshade — yup, you read right! A popular poison from the time of the ancient Romans all the way through to the Middle Ages, deadly nightshade was a popular way to quickly knock off an opponent or someone standing between you and a position of power. This plant contains a heady mix of toxic alkaloids that can cause anything from hallucination to death, perhaps making you think twice about those innocent-seeming potato chips you’re about to tuck into… they’re a relative of a poisonous plant, after all!

Here are a few more reasons why I stopped eating nightshades — and maybe you should too!

1. There are more poisonous nightshades than edible ones

Now, this first point might just be a “guilt by association” type of scenario, but I can’t shake the misgivings I get when I think about the fact that there’s considerably more poisonous nightshades than there are edible ones. While science has generally given the all-clear for run-of-the-mill nightshades like potatoes and tomatoes, it’s apparent that perhaps nature didn’t ever really intend for us to eat nightshades… just a thought.

One of the theories behind why nightshades have such a track record of causing inflammation and joint pain in humans is due to the fact that many of the species in this family can inhibit healthy calcium metabolism. Nightshades contain super high concentrations of bioavailable vitamin D3. This is a critical vitamin for us. But, in this form, it can cause calcium to deposit in the soft tissue rather than the bones, which causes arthritis-like pain in joints and tendons.

This makes even the “edible” nightshades toxic to many animals, but it’s still being debated whether this has any relevance to our own process of calcium metabolism. The jury is still very much out on this one.

Other experts studying nightshades believe that it’s the alkaloids these fruits and vegetables contain, rather than the high levels of vitamin D, that can contribute to inflammation and joint pain. Some of the more notable alkaloid compounds found in nightshades include solanine, nicotine and capsaicin. You’ve probably heard of the latter two — nicotine is found in cigarettes (and indeed, tobacco is a member of the nightshade family). Capsaicin is the natural compound found in chili peppers that gives them their characteristic heat.

In nature, plants use these alkaloids to protect themselves against bugs and fungi that would otherwise feast to their heart’s content on them. But while it might deter the odd bug, we’re a lot larger and so most of us don’t notice these protective compounds when we eat nightshades… aside from hot peppers, that is!

The trouble starts when someone has an autoimmune disease. These alkaloids can sometimes amplify the body’s immune response, which is already in full swing due to an autoimmune condition like rheumatoid arthritis or Crohn’s disease. Now, “amplifying the body’s immune response” might sound like a good thing, but for these people it most certainly is not. In their case, their immune system is attacking their own cells, causing all kinds of pain, inflammation and organ damage. When these people consume nightshades, it’s thought that some of those alkaloids can make things much worse.

4. Nightshades can irritate your gut

Due to our diet, many Americans suffer from gut irritation or impermeability — they just don’t know it yet. In fact, a leaky gut is exactly the reason why much of the population suffers from autoimmune diseases. With increasing gut permeability, food proteins can enter into our bloodstream and spark an autoimmune reaction.

As you know, nightshades contain alkaloids. They also contain compounds called lectins, and both can undermine the health and strength of your gut by irritating the gut lining. This may be one of the most conclusive reasons why some people become sore and inflamed after eating the likes of potatoes or tomatoes, while other people are perfectly fine.

5. There’s so much yet to learn about nightshades

While the jury is still out on whether edible nightshades are in fact toxic to humans, I prefer to err on the side of caution. I suffer from inflammation in my knees, shoulders, hands and lower back, and I’m in no hurry to potentially make that worse by caving and eating some delicious salty fries smothered in ketchup.

Until science can conclude without a shadow of a doubt that nightshades don’t lead to inflammation, I’ll continue to buy piles of sweet potato at the supermarket and risk a few awkward conversations with the checkout lady.