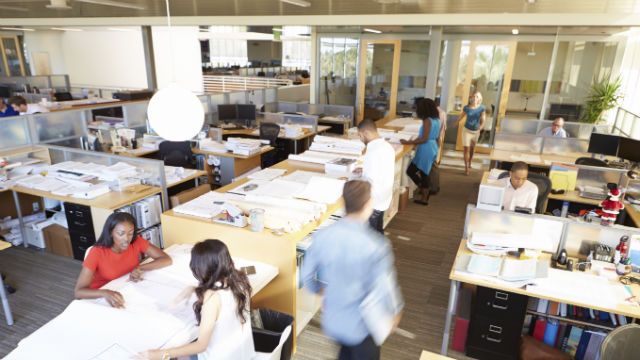 Open office spaces were designed to aid in the flow of communication and ideas. Nearly 70 percent of working people spend their days in an open office-type arrangement. While it sounds like a good idea, open office spaces do not always work as well as planned.
This particular layout seems to work best for workers in their 20s and 30s, so companies are trying to attract them – offering them sofas with high padded seats, and no walls to confine them. Young workers are used to multitasking with their phones in hand and they value comradery with their co-workers, and the open office space offers that to them.

After the switch to an open office, the psychologists observed the employees again, six months later. They noted that the workers had deteriorated in every aspect of the job. The environment was noisy and stressful, and the workers were unproductive.

In 2011, Matthew Davis, an organizational psychologist, reviewed more than 100 studies on open offices and found them to be, “bad for attention span, productivity, creative thinking, and satisfaction.”

The noise that is associated with an open office is a huge issue. A study that Cornell University conducted found that clerical workers who were exposed to open office noise for three hours were on an adrenaline rush and had a “fight or flight” feeling. The noise also impaired the workers’ ability to do basic math or recall information.

“The loss of productivity due to noise distraction … was doubled in open-plan offices compared to private offices,” the study authors concluded.

It seems from this research that workers need a physical barrier for privacy. Without that privacy the worker often feels vulnerable and not in control. Privacy also helps with job performance. Plus, if the worker can‘t change their environment, the heat, or lighting, their spirits may fall.

Another negative of open office space is that workers’ health may be compromised. A study in Denmark of more than 2400 employees found that the more people who worked in an open room, the higher number of employees who called out sick. Seems pretty obvious that the more open a room is, the more the more bacteria and viruses can spread.

One employee from New York said, “…my colleagues and I have been more vulnerable to illness. Last flu season took down a succession of my co-workers like dominoes.”

More and more businesses are seeing the downside of the open space office. A company based in Pittsburgh is offering a few solutions to the problem. They offer modular walls, cubicles and sound systems to mask the noise in the office.

Even though businesses are experiencing the down side of an open office space, more and more companies are opting for this design for their offices. They may be saving money on rent, but are probably losing money on their productivity. And while it’s the lastest thing, it seems as though it’s not the wisest.

It appears that more research needs to be done on open office spaces, closed working areas, and all the options in between, to find the most productive and healthful environment for workers. It may also be different depending on what business one is in. We’ll keep you posted on the latest research.