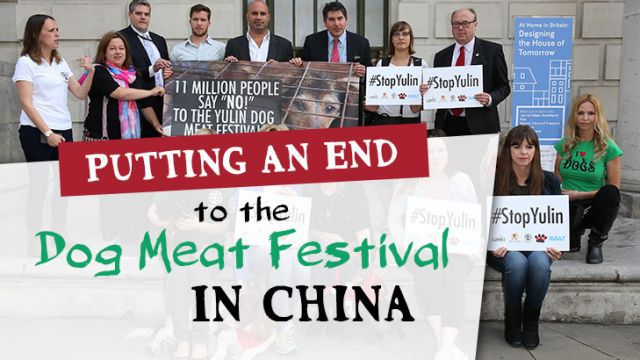 The annual Yulin Dog Meat festival in southern China is quite controversial, and for good reason. Besides the actual consumption aspect, there are consistent reports of participants committing severe animal abuse. Vendors are known for deliberately hurting the animals before slaughtering them, due to the false belief that adrenaline will make the meat taste better.

It’s just awful. Images appear on the Internet of dogs being tortured, burned and brutally beaten before being killed for their meat. Naturally, global awareness of the festival has risen, prompting valiant efforts to stop the horror.

A particularly noble organization, the Animal Hope and Wellness Foundation in Sherman Oaks, Calif., made headlines this year for trying to save as many dogs as possible just as the 10-day festival kicks off. The man at the forefront of the effort to save the canine victims, Marc Ching, has visited Asia repeatedly to seek out abused animals, rescuing hundreds. “The abuse and inhumanity is so brutal out there that it doesn’t compare to anything here in America,” Ching says.

He often goes to the slaughterhouses undercover as a dog-meat purchaser in order to gain access to the animals. Recognizing his inspiring efforts, which often include risking his own life, a number of celebrities recently came together to promote the cause with a video.

Though the dog meat festival has existed for centuries, it has received extreme negative attention only in recent years. The government has distanced itself from the tradition, even going so far as to deny that it exists.

Despite the official denial, a poll published by the state-run news service reports that most Chinese want the festival to end, believing it harmful to the country’s reputation. Seven in 10 Chinese polled said that they had never tried dog meat personally.

There are reports that animal rights activists are making progress toward shutting the festival down, yet others claim that publicity has backfired and instead has prompted people to come try dog meat.

Fortunately, in addition to this year’s promotional video, celebrities continue to bring awareness through social media. Ruby Rose, Ricky Gervais and Gisele Bündchen have taken to Twitter to spread petitions, empowering the public the world over to demand change.

Ching’s journey is a powerful reminder about how much one person can do. While most of us can’t drop everything and fly to China, much less go undercover in a dog slaughterhouse, there are small ways to make things better for animals at home and in China.

Here are some ways you can help: