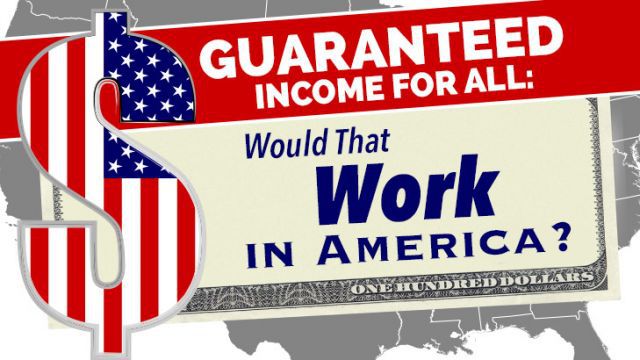 Guaranteed monthly income for every adult is a concept gaining traction in countries debating over wealth inequality and dwindling employment. Switzerland was the first country to vote on a universal basic income plan, but other countries and cities are either considering the idea or have already started trial programs. Would a guaranteed income work in the United States?

Seventy-seven percent of Swiss voters recently rejected a plan to give each adult citizen a guaranteed basic monthly income of 2,500 Swiss francs, or about $2,560, and 625 francs for each child under 18, regardless of employment status. The idea was to fight poverty, social inequality and to guarantee a dignified life.

In Switzerland, opponents warned that the proposal would derail their current economic status — although one far from showing signs of collapse. Switzerland enjoys one of the highest standards of living in the world, even with an aging population. The small alpine nation has an unemployment rate of around 3.5 percent, less than half the average in the European Union. But voters rejected the plan, fearing that $2,500 a month income would make the country too attractive to foreign refugees.

Finland and the Dutch city of Utrecht are now considering a universal basic income for adult citizens. Utrecht begins its pilot program in January 2017. The province of Ontario in Canada also has announced it may soon be mailing monthly checks to residents as it plans to launch a trial period to test the basic income concept, according to the Independent.

“As Ontario’s economy grows, the government remains committed to leaving no one behind” reads Ontario’s budget statement. “Maintaining an effective social safety net is one part of the government’s broader efforts to reduce poverty and ensure inclusion in communities and the economy.”

The initiative will test the waters to see whether a basic income would provide enough support to strengthen the labor force and create savings in other areas, such as healthcare and subsidized housing.

Would it work in the United States?

Guaranteed income definitely has its pros and cons, and recently it has garnered some interest in the United States, particularly during the run-up to the presidential election this November, reports The New York Times. It has been promoted by some Democrats and even some right-wing advocates who see it as an improvement to government welfare programs.

The idea behind guaranteed income is to save on welfare administration costs, reduce poverty in welfare states, be fair to people who are employed and just give people more independence overall. That involves the government handing out a flat-rate income to every single citizen within a country, either by replacing existing benefits or by topping them up. While the idea certainly sounds like a viable solution to wipe out poverty, where would the money come from?

Don’t count on it anytime soon

Lawrence Summers, the former Treasury secretary and onetime top economic adviser to President Obama, told The New York Times that giving 250 million non-poor Americans a $5,000 universal basic income would cost about $1.25 trillion a year. Clearly, some government programs would have to be eliminated to fund the initiative.

“It would be hard to finance that in a way that wouldn’t burden the programs that help the poor,” said Summers.

Still, wages have been stagnant in America for decades, according to Business Insider. After the Great Recession things have only gotten worse for many families. Millions of Americans live below the poverty line. Even with government benefits, many need financial support to survive.

Measures may pass in some countries within the European Union or even Canada, but I don’t think Americans should expect a guaranteed monthly income coming anytime soon. It just seems like an unlikely course for one of the world’s most free-market economies — unless we see a significant political change in the next few years.