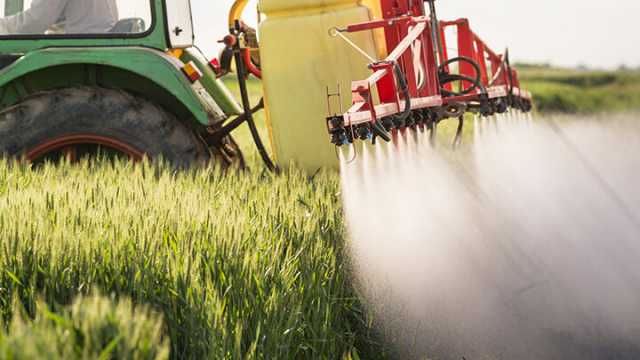 GMO foods, a hotly debated topic, seems to be on everyone’s lips these days. This is mainly because of glyphosate, a pesticide used specifically on GMO crops. It is a probable carcinogenic that may lead to cancer, diabetes and neurological effects. But now, a new food label allows us the opportunity to once and for all say “no” to products with glyphosate residue. And that may keep you and your loved ones from being poisoned.

What is glyphosate and why is it in our food?

Glyphosate is a pesticide. Pesticides are substances used to repel, kill or control animals or plants that are considered to be pests. Under the umbrella of pesticides come:

As you can see from the list above, pesticides are everywhere; they are in farmer’s fields, the foods we eat, our gardens and even in our homes. Because these chemicals are so widespread, people are exposed to low levels of pesticide residues through their diets.

Glyphosate is one of the most widely used

Glyphosate falls under the category of an herbicide. It is applied to kill both weeds and grasses. It prevents plants from making certain proteins needed for growth. A sodium salt form of glyphosate is also used to ripen fruit. According to the National Pesticide Information Center, glyphosate was first registered for use in the United States in 1974. Today, it’s one of the most widely used herbicides in the U.S. It’s used in agriculture and forestry, on lawns and gardens, and for weeds in industrial areas. Some products that contain glyphosate are even used to control aquatic plants.

What makes pesticides like glyphosate particularly troubling is that scientists do not yet have a clear understanding of the long-term health effects associated with pesticide residues. In fact, the National Institutes of Health (NIH) reports that although the health effects of pesticides are not well understood, their use has been associated with conditions such as cancer, diabetes and neurological effects. Yet, proponents of Monsanto (leading producer of genetically engineered seed and the glyphosate-based herbicide Roundup) argue that these chemicals are safe for the environment and safe for humans.

The GMO and glyphosate connection

GM (genetically modified) foods are produced from organisms that have had changes introduced into their DNA using genetic engineering. GM herbicide-tolerant crops allow farmers to use certain herbicides that will kill weeds without harming their crop. A good example of GM herbicide-resistant crops is the group of “Roundup-resistant” GMOs (genetically modified organisms) which are designed to tolerate the herbicide glyphosate, an ingredient found in the weed killer Roundup.

In March 2015, The World Health Organization (WHO) announced that the herbicide glyphosate was probably carcinogenic to humans. In addition, WHO suggests there is convincing evidence that glyphosate also causes cancer in laboratory animals. According to WHO, the agricultural use of glyphosate has increased sharply since the development of GMO crops created to make them resistant to glyphosate. For Monsanto, that’s a win-win situation.

Because of glyphosates varied uses in forestry, urban and the home, it’s been detected in the air during spraying, in the water and in food, says WHO. This accounts for the general population being bombarded with low levels of glyphosate in their diet.

Glyphosate found in many processed foods

Glyphosate is the most heavily used chemical weedkiller in food and agricultural production in history. There are more than 750 products containing glyphosate for sale in the U.S. In the past 20 years, there has been a massive increase in glyphosate use, directly linked to Monsanto’s Roundup Ready genetically engineered crops like GMO corn, soybeans, cotton, sugar beets and canola plants.

Recently, research commissioned by Democracy Now and The Detox Project looked at the levels of glyphosate in many American foods. The testing completed by Anresco Laboratories in San Francisco, an FDA registered laboratory, found that popular brands of cookies, crackers and cereals, among other processed foods, tested high in levels of glyphosate. Even some organic and non-GMO foods contained glyphosate.

The report titled “Glyphosate: Unsafe On Any Plate” goes on to suggest that even ultra-low levels of glyphosate could be detrimental to human health. In fact, previous research showed that glyphosate or glyphosate residues of only 0.05 parts per billion (ppb) can cause damage to at least 4,000 genes. Ten parts per billion may further cause serious health effects, such as kidney and liver damage. Anresco’s results, however, showed that some of the tested foods had up to 1,000 times that amount.

You may have noticed (or even chosen) a product because of its Non-GMO Project label. The Non-GMO Project label only verifies that a product does not contain GMOs, thus allowing consumers to avoid buying products made with GMOs. But that is the only information this label provides. Although that’s a great start, you can’t tell if those non-GMO cookies or cereals in your shopping cart are free of the pesticide glyphosate. But now a brand-new label will allow you to choose foods that are glyphosate-free.

Glyphosate-free label could keep you from being poisoned

The “Glyphosate Residue Free” label, created by The Detox Project, takes labeling GMO, non-GMO or organic food to the next level, providing transparency to chemicals lurking in your food. To be certified glyphosate residue-free, a product must have no glyphosate or AMPA residues above laboratory detection (between 0.1 parts per billion and 20 parts per billion depending on the product), a standard that is harsher or the same as the U.S. Environmental Protection Agency’s Maximum Residue Limits.

Any ingredient or food product made for human or animal consumption can be verified “Glyphosate Residue Free” or “Glyphosate In Transition” as long as it meets the methods used by the third-party laboratory for testing for glyphosate and AMPA residues.

“Glyphosate In Transition” is a verification that promises customers that the producers are taking the glyphosate issue very seriously. And the product is in transition to becoming “Glyphosate Residue Free.”

The bottom line is that consumers want transparency when it comes to what they are eating and feeding their family. Global sales of non-GMO food and beverages are expected to hit $800 billion within 2017. The growth is largely driven by demand in Europe and the U.S., according to a report by Packaged Facts.

The report suggests that European consumers have rejected foods made from GMOs, forcing international food companies like Nestlé and Coca-Cola to introduce or begin to develop non-GMO versions of their products.