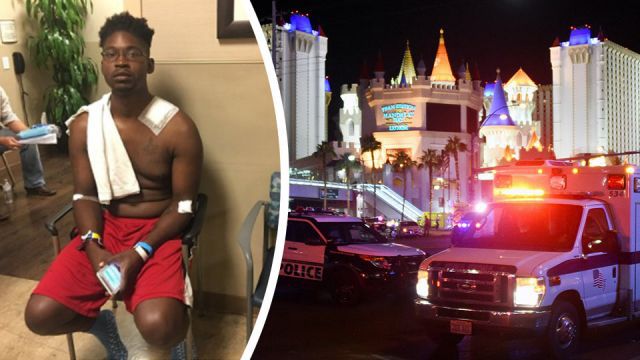 Even in the midst of a major tragedy like the deadliest shooting in modern United States history, heroes will rise. Today, we know of at least one of these people, and his name is Jonathan Smith. He is 30 years old and currently lives in Orange County, California.

Smith is credited with warning people that it wasn’t fireworks going off, which many people originally thought. In fact, it was Stephen Paddock shooting the crowd from the 32nd-floor of the Mandalay Bay hotel nearly 400 yards away. “Active shooter, active shooter. Let’s go, we have to run,” screamed Smith.

He is also credited with saving nearly 30 lives, each time running back out into the spraying bullets. He grabbed multiple people and brought them to a large field with several rows of vehicles. “I got a few people out of there,” Smith said. “You could hear the shots. It sounded like it was coming from all over Las Vegas Boulevard.”

Here is Smith getting medical attention at Sunrise Hospital. It has gone viral on Twitter with several hundred thousand retweets.

Jonathan Smith, 30, saved ~30 people last night before he was shot in the neck. He might live w/the bullet for rest of his life. #vegasstrip pic.twitter.com/6hLujXWe51

Apparently, Smith had broken his safe cover behind a car to tell two young girls to also get down when he was struck by a bullet in his neck. “I couldn’t feel anything in my neck. There was a warm sensation in my arm,” Smith told a Washington Post reporter, while being treated in the Sunrise Hospital.

Smith thinks an off-duty California police officer who helped stop the serious bleeding from his neck saved his life. The officer was driving with several other victims in the back of his truck, when he saw Smith on the ground struggling to breathe. Unfortunately, Smith will probably have the bullet embedded in his neck for the rest of his life, due to the fact that doctors think it will cause even more harm if they were to remove it.

Sadly, Smith’s situation draws crucial attention to the serious financial needs of all the victims following the shooting. The estimated total cost of medical attention that bullet victims will face are upwards of $3 million. On average, each bullet wound will cost nearly $30,000 to fully treat.

The Clark County Commission Chair created a GoFundMe page for donations to a general victims’ fund, which has raised over $3 million as of Tuesday morning. Also, Smith’s sister-in-law has started another GoFundMe page to help Smith’s medical expenses. Currently, they already have $15,000, despite only $7,000 being the original goal.

Hopefully, along with other GoFundMe pages for shooting victims, those numbers continue to rise. “Our family is so blessed to have someone so heroic and selfless putting the lives of others before his own,” reads the GoFundMe page.

Smith has three of his own children and lives with his long-time girlfriend Crystal. All of the donations will go to his family as Smith starts his recovery before returning to work.

Smith’s courageous actions have spurred many people on social media to commend his bravery and inspiration:

Jonathan Smith is the bright spot on our sad world right now. Thank you, sir.❤️

You’re looking at a true HERO 🙌🏾🙏🏾👏🏾 #JonathanSmith was shot twice while trying to run back and forth to save 30 others in #LasVegas pic.twitter.com/hK14Sz7W7i

“I don’t see myself as a hero,” said Smith. “I would want someone to do the same for me. No one deserves to lose a life coming to a country festival.”

Smith’s actions during the shooting show how even in the darkest of times, some people will rise up and stare evil directly in the face. Smith will surely be remembered as someone who rose to save other humans in dire need and there is no question he should be praised for this extremely noble deed.