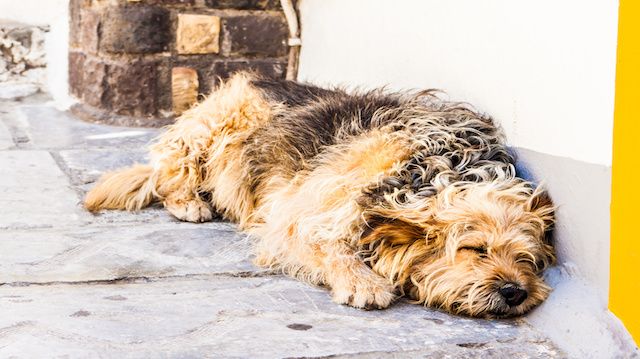 Dogs and cats end up at shelters for any number of reasons, but often it’s because their struggling owners can’t provide for them. People without homes usually have no choice but to give up their animals, while others must decide between paying the rent or buying pet food. Unfortunately, shelters may put these animals down. Volunteer organizations nationwide are making an effort to keep homeless and poor people with their pets, by providing food and basic veterinary care.

According to My Dog Eats First, a Louisville, Kentucky-based nonprofit, there are approximately 3.5 million homeless people in the United States, and between five and 10 percent of them have pets. These animals are generally the only source of companionship and unconditional love for people in these dire situations — the sole constant positive factor in their lives.

The homeless and pets

Some individuals might feel the homeless have no business keeping pets, and that the animals would be better off with people who could provide them with good care. There’s merit to that argument, but taking away a homeless person’s pet is taking away the only thing that matters to him, perhaps the only thing keeping him alive. Dogs are loyal, and people living on the streets need some protection. One woman with a dog states, “When you’re homeless, you’re never safe. I’m the only woman I know in this situation who hasn’t been assaulted.” They are also, in essence, therapy dogs. It’s not unusual for a homeless or very poor pet owner to make sure the pet eats before they do — hence the name “My Dog Eats First.”

Pet pantries and programs for the homeless and indigent and their pets exist nationwide. Some offer only food, but many offer veterinary help. The community-based Street Dog Coalition is working to establish clinics all over the country. It offers medical tents and a start-up stipend for initial supplies. What it needs are interested veterinarians. The group held its first Street Dog Clinic in Fort Collins, Colorado in May 2015. Groups such as the American Veterinary Medical Foundation provide funding for clinics offering charity care.

In Wisconsin, the University of Wisconsin-Madison schools of veterinary medicine and social work formed Wisconsin Companion Animal Resources, Education, and Social Services, or WisCARES.  It offers veterinary services for the homeless or those “precariously housed,” — in danger of losing their living space at any time.

It’s certainly important that pets belonging to homeless people are spayed or neutered, and receive core vaccinations. These animals are more likely than intact pets of people with housing to have opportunities to mate and reproduce. The catch is that homeless people are wary of anyone taking the dog or cat away for the surgery — they suspect the pet won’t be back. Some programs work with local veterinarians so that the owner may bring the animal in and pick the pet up after the procedure. Other organizations use mobile veterinary services to care for the animals.

These organizations exist only because of volunteers, donors and fundraising. Volunteers must venture into the seediest, most crime-ridden areas of a city, because that’s where the homeless and very poor are found. Judgmental people need not apply. Other volunteers man the pet food distribution sites, or pick up donated food. These organizations always need veterinarians to provide necessary medical care. As with most nonprofits, fundraising is a constant. Resourceful groups raise money via charity walks, auctions, yard sales and other endeavors, but the steadiest source of income comes from private and public sponsorship.

Food for people and pets

Some food pantries geared toward people also stock donated pet food. Since companion animals are not the primary mission, they do not offer veterinary or other care, but can provide information about such services. Not only do the poor receive pet food, but the dog or cat receives food designed for its species. Otherwise, poor and homeless people may feed their pet anything available, to the possible detriment of the animal.

There are few worse situations than being homeless, but there is one. It is being homeless and having to give up the only being you love in the entire world. Thanks to the work of these organizations, some homeless people have one less thing to worry about in a life filled with stress and difficulty. They can look out for their best friend.