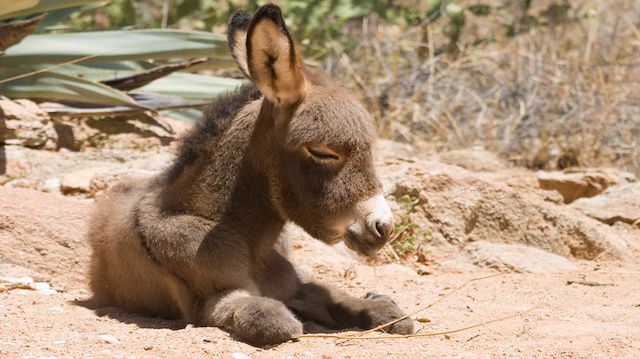 A donkey sanctuary in Bonaire has rescued an orphaned donkey foal whose mother was hit by a car on the island. Bonaire is the “B” of the ABC islands in the Caribbean; the other islands are Aruba and Curacao. The orphaned foal, named Perry, is staying with other donkey foals that have also lost their mothers. Fortunately for little Perry, he has a bright future since the sanctuary took him in. Other donkeys around the world — young and old — are not so lucky.

Bonaire is one of the world’s great scuba diving locations. Each year, the island hosts thousands of tourists arriving for sun, fun and relaxation. The island’s wild donkeys are among its top tourist attractions, as these equines roam all over. Unfortunately, that means donkey and motor vehicle collisions aren’t uncommon.

Donkeys arrived in Bonaire with the Spaniards in the 1600s, and were used as beasts of burden. With the arrival of the internal combustion engine, donkey labor was no longer necessary, and the animals were largely left to fend for themselves. Bonaire is an arid island with little vegetation; many wild donkeys end up starving. They are also victims of abuse, but traffic presents the greatest hazard.

The Donkey Sanctuary Bonaire began in 1993 when Dutch nationals Marina Melis and her husband, Ed Koopman, established the organization to care for the neglected, wounded, sick and orphaned donkeys on the island. The sanctuary’s primary objective is to offer “a sheltered, protected life to all the donkeys of Bonaire.” In the past 23 years, Donkey Sanctuary Bonaire has rescued hundreds of donkeys. Through a network of volunteers, these donkeys receive lifelong care. Currently, more than 600 donkeys call the sanctuary home.

Donkeys that are too badly injured or sick to survive when the sanctuary receives word of them are humanely euthanized, but most receive veterinary care and are nursed back to health. Visitors to the island may tour the sanctuary, and donations are greatly appreciated.

Perry is drinking from a bottle, the standard way in which orphaned foals are fed if a nurse jenny (female donkey) isn’t available. While matching up a needy foal with a jenny that has lost her own baby is the best way to raise an orphan donkey, it rarely happens. Instead, sanctuaries and individuals raising orphan donkeys must devise alternative feeding methods until the foal is about five months old. While foals are generally hand-raised because of the mother’s death, they may also require feeding because the mother has rejected them or she is unable to produce sufficient milk. Here are some tips on feeding orphaned donkeys:

Plays well with others 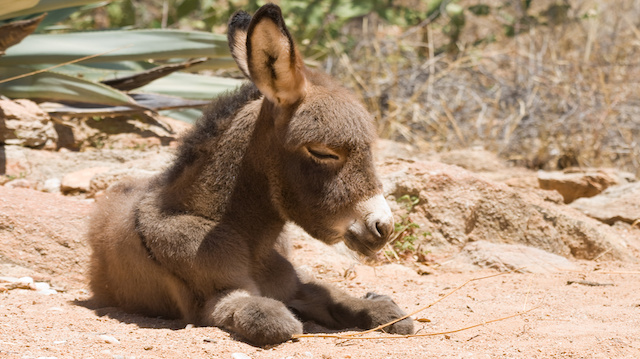 Orphaned foals often develop bad habits if raised by people. That holds true whether the orphaned equine in question is a donkey, horse, pony or mule. There are certain behaviors that members of their own species must teach them. People can exacerbate the problem — and create a truly dangerous animal — if they allow cute little foals to do things that are perilous once they get a bit older. That includes letting the foal put his front feet on human shoulders and similar actions that are unthinkable in a grown animal.

To ensure an orphaned donkey plays well with others, he needs exposure to other equines. Since little Perry is living with other orphaned donkeys, they will sort out a pecking order, and he will learn to behave like an ass. For donkeys, that’s a good thing!

For those raising an orphaned foal on their own, find a suitable companion once the baby is about one month old. Aged, quiet pony mares or geldings (a neutered male), or older jennies or “john” donkeys can show the youngster the ropes. A john donkey is a gelding, while a jack is an intact animal. You do not want to put an orphaned foal in a pen or paddock with a jack. If keeping another equine isn’t possible, a good-natured female goat or sheep — a doe or ewe, respectively — can serve for socialization purposes. So can a wether, the term for a castrated goat or sheep.

Rescuing an animal — whether it be a cat, dog, or donkey — can be a rewarding experience for us humans and a lifesaver for our furry friends.