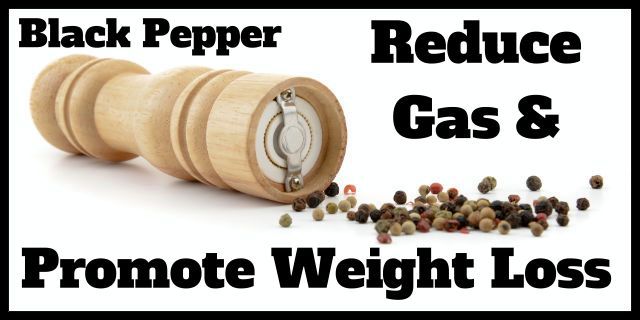 Did you know that a powerful addition to your healthy weight loss plan is very likely already in your kitchen? No, we’re not talking about coconut oil – although that one is amazing too. Draw your attention to your pepper mill. That’s right, it’s black pepper!

Black peppercorns (Piper nigrum) are actually berries, which grow on long vines in tropical regions. They are made from the same berry as white and green peppercorns. To make black pepper, the berries are picked when they are partially ripe, and then they are dried until their skins turn a black color. This process makes black pepper one of the most potent of the peppercorns.

Not only does black pepper play a starring role in seasoning our meals today, it has been prized throughout history. It hails from ancient India, and was also an important culinary and medicinal spice in cultures including those of the ancient Greeks and Romans, as well as Medieval Europe.

This spice has been traditionally used for hundreds of years for many ailments, including those rooted in inflammation, as well as digestive disturbances. It can also be instrumental to healthy weight loss.

So what is the connection between black pepper, soothing digestion and promoting weight loss? As it turns out, the benefits are manifold. A 2001 study published in the journal Planta Medica found that piperine, a compound found in black pepper, could help to soothe diarrhea symptoms. It has also been found to stimulate the stomach’s secretion of hydrochloric acid, which is necessary for proper digestion.

It is likely due to black pepper’s ability to increase hydrochloric acid secretion that makes it known for its ability to quell gas symptoms. This ability also promotes a healthy gut environment, because when digestion is running smoothly, toxins are more easily eliminated from the gut.

As far as weight loss, a 2012 study published in the Journal of Agricultural and Food Chemistry found that piperine has the ability to block fat cells from forming, and to promote the breakdown of existing fat cells. On their results, the study authors wrote:

According to the researchers, piperine may also have other effects on the metabolism that promote fat loss/lessened accumulation of fat, although more research needs to be done on this. Additionally, black pepper is laden with antioxidants, which along with supporting the overall health of the entire body play an important role in healthy digestion and gut balance.

On top of it’s digestive and weight loss potential, black pepper is highly nutritious – it contains vitamin K, and the minerals calcium, copper, chromium, iron and manganese, along with fiber. Black pepper is also known for its decongestant abilities, and research from the University of Michigan Cancer Center has linked it with aiding in breast cancer prevention – especially when combined with turmeric.

So, whether you’re trying to amplify your fat loss, want to kickstart your digestive health, or just wish to provide your body with some great minerals and antioxidants – all with great flavor – never underestimate the power of black pepper.