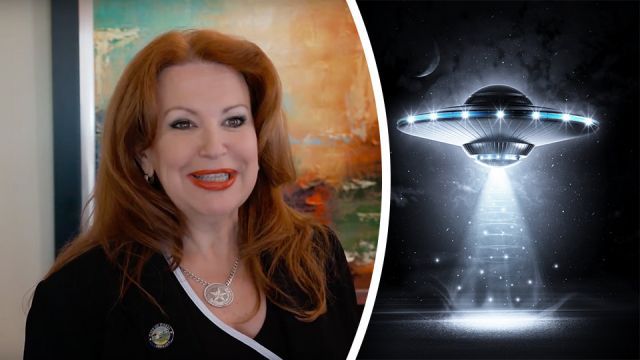 Congressional candidate Bettina Rodriguez Aguilera (R) is probably hoping the stars will align for her bid to win a congressional seat in Florida’s 27th district. However, her quest may be complicated by interviews she gave light years ago, in which she claimed she was abducted by space aliens.

The interviews in question date back as far as 2009 and they were conducted on Spanish-language TV. In the video exchanges, Aguilera delves into both cosmic and religious matters as she explains her alien encounters, which reportedly began at the age of seven.

She describes her first visit aboard a spacecraft by saying, “I went in. There were some round seats that were there, and some quartz rocks that controlled the ship — not like airplanes.” She also explains that the aliens were not exactly little green men, bug-eyed or unearthly. Instead, she describes them as being tall, blond and dressed in party outfits.

Aguilera also said that the beings from another planet communicated telepathically and that they told her about future events (such as the emergence of ISIS). They also promised to return ten years later — which they did. Though her interview is in Spanish, you can see the first one here (below) for yourself:

Currently, Aguilera is trailing in her race in a very crowded field. Her bid is also considered a longshot because she is running as a Republican in a district where Democrats traditionally hold an advantage. Some political observers believe that the old interviews she did claiming to be abducted — which were posted on Youtube a long time ago — have been unearthed by opponents seeking to discredit her candidacy.

Aguilera insists ‘we are not alone’

However, Aguilera is not backing away from her claims. Recently she told the Miami Herald that:

“For years, people including presidents like Ronald Reagan and Jimmy Carter and astronauts have publicly claimed to have seen unidentified flying objects and scientists like Stephen Hawking and institutions like the Vatican have stated that there are billions of galaxies in the universe and we are probably not alone. I personally am a Christian and have a strong belief in God; I join the majority of Americans who believe that there must be intelligent life in the billions of planets and galaxies in the universe.”

Aliens provide insight into the cosmos

Aguilera says the aliens she encountered provided her insight into the nature of the cosmos. For instance, she says that they told her that “God is a universal energy, not a person. It’s in everything. God talks to people and they understand it in different ways, but there’s only one religion.”

You can see another one of Aguilera’s interviews below:

Do you believe aliens are real? Would you vote for a candidate who claims they were abducted by space aliens? Please feel free to share your thoughts in the comments section below.