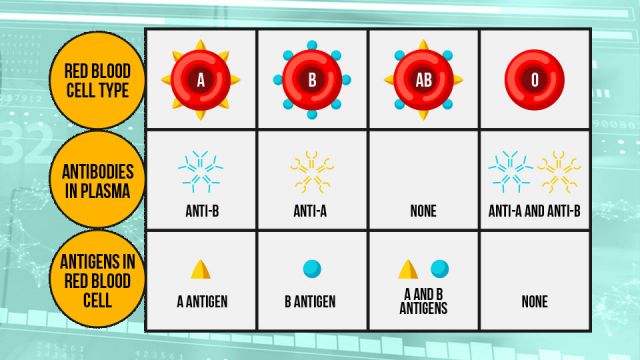 People with the AB blood type are, according to a recent study from the University of Vermont, 82 percent more likely to develop memory and thinking problems that eventually turn into dementia. Dr. Cushman, the head of the study, said that vascular issues can “contribute to memory problems.”

Your blood type can have an impact on diseases such as heart attack, stroke and thrombosis. A study from the Harvard School of Public Health found that non-O blood groups have at least a 60 percent higher chance of developing dangerous blood clots, and an increased risk of coronary heart disease. However, like in most of these situations, lifestyle and prescribed medications can have a much bigger impact on risk, and tip the probability of something going wrong in the opposite direction.

It seems that people with blood type A are more likely to get gastric cancer, and people with blood type O are more likely than others to develop a peptic ulcer. Gustaf Edgren, associate professor of epidemiology at the Karolinska Institute in Sweden, says that different blood types have different susceptibilities to bacterial infections, and these two conditions are associated with a bacteria called H. pylori. However, he also stresses that the risk difference is too small to be of any serious consequence, and that the most important thing is to avoid smoking and excessive alcohol consumption, while eating a healthy diet.

The O blood type has been linked with a reduced risk of getting a range of cancer types, including colorectal, pancreatic and stomach cancer.

People with type O blood come out the winners again here, as they have some protection from the worst types of malaria. Researchers have found that this is because the type of protein secreted by the mosquito tends to bind better with blood cells that are type A rather than type O.

There is a lot of debate over if a diet aligned with your blood type has any scientific basis or not. The author of “Right 4 Your Type” argued that people process their food differently depending on their blood type, but other scientists have suggested the theory lacks credibility. If you are interested, the theory contends that type A people are better off as vegetarians, and type O are set up to be meat eaters.

Do you know your blood type? Will it impact your health-related decisions?