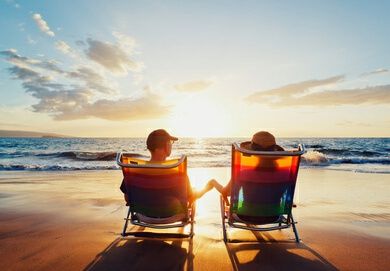 Everyone loves being in love. However, a number of studies have found that being in love benefits both physical and mental health. These studies show that a happy relationship contributes greatly to a longer, happier life.

The Department of Health and Human Services published a report in 2007 which states that, overall, married people live longer, are happier, drink less alcohol and visit the doctor less frequently than unmarried people.

The following are just a few benefits that being in love can impart:

Research performed at the University of North Carolina at Chapel Hill found that the acts of hugging and hand-holding release oxytocin in the body. Oxytocin reduces stress hormone levels, which increases pain tolerance, improves mood and lowers blood pressure.

In fact, many studies focusing on the benefits of being in love have found lowered stress as one of the main results. As high stress levels are a primary cause of a slew of diseases, it makes sense that someone would live longer if he or she was not stressed out.

Joseph Hulett, M.D., psychiatrist and senior medical director for OptumHealth Behavioral Solutions, says, “according to a 2004 study by the Centers for Disease Control and Prevention (CDC), mortality rates were found to be the lowest in married couples.”

He adds, “human beings are social animals who have biological drives that make them want to find relationships. When they can’t find those unions, they’re punished with stress.”

Julianne Holt-Lunstad, associate professor of psychology at Brigham Young University agrees. “Our relationships help us cope with stress, so if we have someone we can turn to for emotional support or advice, that can buffer the negative effects of stress.”

Gian Gonzaga, M.D., the senior director of research and development at eHarmony Labs, says that happy couples who approach their disagreements in a positive way have better-functioning immune systems than those who do not.

Dr. Gonzaga references a study by Ron Glazer and Jan Kiecolt-Glaser, who observed several sets of couple during arguments. The couples that argued in an optimistic, loving manner had higher immediate immune functionality, while the couples that exhibited negative behavior towards each other during their arguments showed a downturn in immediate immune system functionality.

According to Dr. Hullett, “researchers studied people that experienced electrical shocks and found that holding someone’s hand ameliorated the pain and perception of pain.”

He also points out that the female participants in the study who were happily married had even lower pain levels when they held their husband’s hands. Hullett adds, “friends helped reduce the pain that these subjects were feeling, but their husband did a better job at it.”

Jay Cardiello, a nutritionist and certified fitness trainer, point to a study that shows that couples who exercise together have higher success rates from their workouts than those who exercise by themselves. He says, “nearly half of people who exercise alone quit their programs after one year, but two thirds of those who work out with a loved one stick to it.”

Studies also show that those who work out with their partner work approximately 12 to 15 percent harder. Having someone you love encourage you every step of the way to meet a mutual goal really pays off.

A study performed at Rutgers University found that the people they surveyed, when looking at photos of their loved ones, had an increase of dopamine activity in their brains. Dopamine is linked to increased energy, a positive outlook, and an overall sense of well-being.

In the words of a famous Jefferson Airplane song, “Don’t you want somebody to love?”