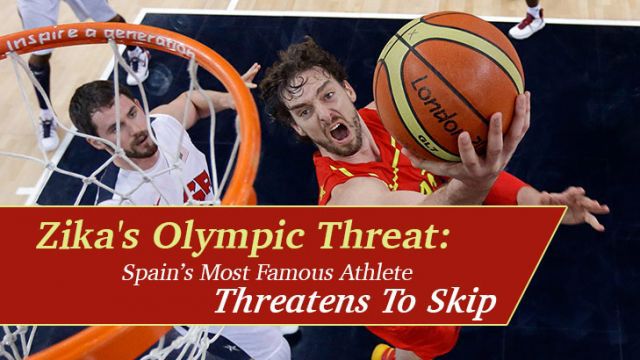 Pau Gasol, widely considered Spain’s most famous athlete, actually attended medical school prior to becoming a professional basketball player. Using his training in healthcare, he acts as a strong advocate for his Chicago Bulls teammates when they are receiving treatment for an injury. In fact, the team’s doctors claim they speak to him like a colleague and thoroughly explain their reasoning behind treatment plans. Now, Gasol is making headlines with his public caution about this summer’s Olympic games, set to be held in Zika-infested Rio de Janeiro, Brazil.

Every so often, the public is inundated with news stories of the latest looming health crisis. While those in the recent past included SARS and Ebola, Zika is the latest disease on everybody’s radar. The Mayo Clinic reports that Zika was first identified in Africa in 1947. Transmitted primarily through the bite of the Aedes mosquito, the virus has broken out “in southeastern and southern Asia, the Pacific Islands and the Americas.” At present, no vaccine exists, but those infected rarely get sick enough to even merit a trip to the hospital. In healthy people, the virus usually presents as mild flu-like symptoms, such as rash, fever, and joint pain. In a small number of Zika-infected people, there appears to be a subsequent onset of Guillain-Barré Syndrome, a nervous system condition that the Centers for Disease Control and Prevention (CDC) is currently examining. The real trouble begins when pregnant women contract the virus, though, as it is continuing to be studied for its link to serious birth defects, such as microcephaly, in infants.

Prior to April 2016, even though there appeared to be a link, researchers did not have enough information to fully proclaim that Zika was a cause of microcephaly in infants. But with new studies being completed just last month, the CDC released information proclaiming the virus to be a cause. And just like the reports on previous viruses like SARS and Ebola, there is a widespread confusion over how the virus could affect an individual.

Given that Rio de Janeiro is a hotspot for Zika, more and more concerns are arising as to whether this summer’s Olympic games should even be held. As it stands, the World Health Organization (WHO) maintains that “canceling or changing the location of the 2016 Olympics will not significantly alter the international spread of Zika virus.”

On the other side of the coin are doctors and professors who are vehemently against the games being held in Rio, calling it outright unethical to proceed. Just recently a cohort of 150 health professionals wrote an open letter urging the WHO to either relocate the games or cancel them altogether. Further, Dr. Amir Attaran published an essay in the Harvard Public Health Review, citing similar concerns about upping the number of infected people: “… while Brazil’s Zika inevitably will spread globally — given enough time, viruses always do — it helps nobody to speed that up. In particular, it cannot possibly help when an estimated 500,000 foreign tourists flock into Rio for the Games, potentially becoming infected, and returning to their homes where both local Aedes mosquitoes and sexual transmission can establish new outbreaks.”

The virus has gotten its reputation for affecting pregnant women, but doctors also remind us about the very real possibility of sexual transmission. What about athletes or Olympic attendees who want to have families? Spain’s Gasol seems to be aligned with these concerns. In a recent article in The Guardian newspaper, Gasol stated, “Some of these athletes [I spoke to] are planning to have children in the near future and this could affect them, it could affect the health of their kids and their wives.” It’s true. Dr. Amir Attaran points out that allowing half a million people to go to Rio will only result in more infections and more complications for families around the world.

The current guidelines state that pregnant women should avoid areas with the Zika virus and that people who do visit Zika-ridden areas should take steps to avoid mosquito bites. However, with all of the facts present, we can see clearly that this isn’t enough.

With regard to the Olympics, the WHO recommends attendees either abstain from sex or use condoms both during and up to one month after their visit to the area. But sometimes Zika doesn’t cause any symptoms and can effectively hide itself within a human host, prompting people to think that they are fine. Thus, a man could theoretically be infected, have no idea, and spread the virus to his partner sexually. If a pregnancy occurs, these parents could be in for a devastating diagnosis of microcephaly for their newborn.

What is going on here? Why isn’t the WHO acting appropriately? Notoriously slow to react (think Ebola), the WHO seems to really be dragging its feet here. Prominent members of the world’s medical community are up in arms about this, but not much attention is being paid to them. It doesn’t seem realistic to assume that all the people attending the Olympics will be fully informed on the protocol for avoiding Zika and its complications. Should the WHO take another look and recommend the games be changed?