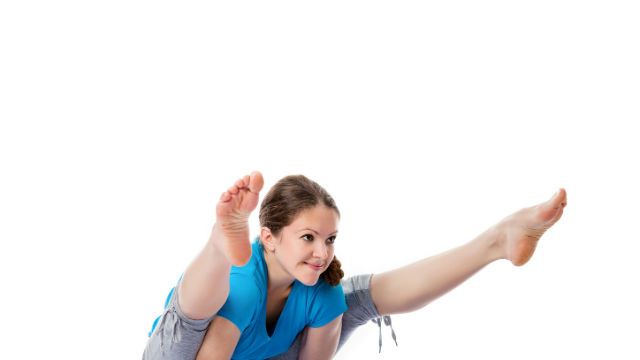 All yoga poses can be safe and beneficial when done mindfully and with close attention paid to alignment. However, some yoga poses require strength, flexibility, and concentration that can only be developed over a long period of consistent practice. If you are new to yoga, avoid attempting the following three poses, and stick to their variations until you’ve gained the necessary experience and confidence in your practice.

Doing a full backbend isn’t exactly a beginner move. Performing wheel pose safely demands flexibility and strength throughout the entire body. Without developing these elements, wheel pose, which is supposed to increase flexibility in the spine, may end up injuring it instead.
Instead, try Bridge Pose (Setu Bandhasana)
Practicing Bridge Pose allows you to experience a lot of the same benefits as wheel pose, while simultaneously developing the strength and flexibility to eventually practice the more advanced posture.

Lotus pose is sometimes held up as the most important pose for yoga and meditation, as it allows the practitioner to sit with a solid base and an erect spine. However, Lotus requires a lot of hip flexibility, which can take years to develop. Too many people have injured their knees trying to take on this pose before they were ready. See your practice as a journey, and put this one aside for later.
Instead, try Easy Pose (Sukhasana)
Don’t be fooled by the name—Easy Pose can also be a challenging pose for people who’ve spent their lives sitting in chairs. This pose gives you the same benefits of lotus pose, in that it’s a seated position that allows you to feel comfortable and grounded while lengthening your spine. Beginners can sit on a cushion or block in this pose to allow their hips to relax.

Headstand not only looks cool, it also provides the practitioner with a whole host of benefits. However, without proper preparation, it can pose more dangers than benefits. One of the greatest dangers of Headstand is hurting yourself in a fall, which can happen on the way into, during or coming down from the posture. The pose can also put a lot of pressure on the neck, especially if the practitioner hasn’t built up the necessary shoulder, upper arm and core strength.
Instead, try Shoulderstand (Salamba Sarvangasana)
Shoulderstand provides the same benefits as headstand without the required strength or risks associated with headstand. Practice this inversion instead of headstand until you build up core strength and get used to the feeling of being upside-down. Practicing shoulderstand with a blanket folded under the shoulders is good for both beginners and experienced practitioners, as it takes some pressure off of the neck.