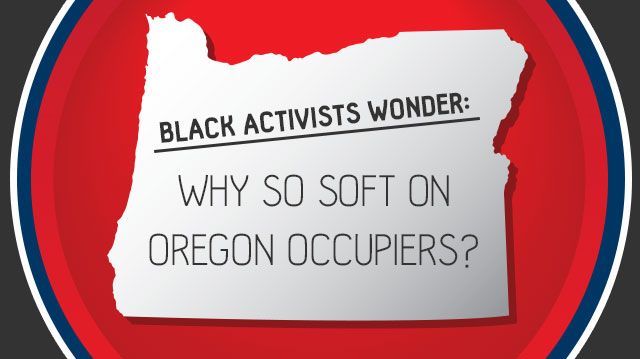 On January 2, a group of armed Americans took possession of Malheur National Wildlife Refuge, an empty federal wildlife refuge building in Burns, Oregon. Mocked as the Y’all Qaeda and for their online requests for snacks, the men claim to be setting up base camp in an effort to live free of the “tyranny” of the federal government. This has prompted a question: What would happen if these men were black instead of white?

A reasonable question, but take a minute to consider how the standoff in Oregon is different than the incidents involving African-American individuals and groups of unarmed black activist protestors, and who is enforcing the law in each situation. After all, taking over a public building by force is a far more invasive act than walking down a public street or waving a sign at a march — even if both are forms of protest. Should their treatment be similar?

The men involved in the Oregon standoff call themselves the Citizens for Constitutional Freedom. The group includes Ammon Bundy, Ryan Bundy, Jon Ritzheimer, Blaine Cooper and Ryan Payne. Despite the fact that they claim they are standing up for local miner, logger and rancher rights — including those of Dwight and Steven Hammond, men convicted of committing arson on federal land — these men are not locals. According to the news site Vox, they’re a group that travels around the country “attaching themselves to various local fights against the federal government, usually over land rights.”

Bundy patriarch Cliven Bundy staged a similar standoff in 2014 in Nevada, and many of these same men participated in that protest. Oregon isn’t their first rodeo, and law enforcement has to assume that the men are as armed as they claim to be, and they’ve planned this out fairly well, despite their online pleas for supplies. The group also has stated that they are willing to die for their cause, and that’s something that the federal government clearly wants to avoid, given the spectacular violence of past standoffs, such as in Waco and Ruby Ridge.

We’ve seen horrible instances in the past few years in which African Americans have been arrested, assaulted and killed while protesting or just going about their business of everyday life. When we see a group of raging, armed white men getting away with setting up camp in a federal building, it’s discouraging to think that law enforcement isn’t showing up.

“I am deeply troubled by the media portrayal of the events in Oregon and the armed takeover of a federal wildlife refuge,” Rep. Donna Edwards (D-Md.) said in a statement published by The Washington Post. “Since the beginning of the Black Lives Matter movement, activists. . . have been referred to variously as ‘thugs,’ ‘criminals,’ and ‘drug users.’ To the contrary, most of these protests and protesters have been peaceful, and organizers have sought and obtained permission to peaceably assemble in exercise of their Constitutional rights.

“But in Oregon, a group of armed men illegally occupying a federal building have been referred to as an ‘armed militia,’ or simply ‘occupiers,’ as though that behavior is acceptable in a nation of laws. What is happening in Oregon is not protest sanctioned by the Constitution, it is lawbreaking.”

However, law enforcement has shown up, just different law enforcement: The Oregon standoff involves federal organizations such as the FBI rather than local police. After Ruby Ridge and Waco in 1992 and 1993, respectively — events during which many died — the government has learned a few lessons. One such lesson is that, sometimes, it’s just best to let armed nutjobs stage their standoff until they get bored and call it off.

In fact, just a couple of years after the Waco Branch Davidian conflict, which lasted from  February 28, 1993 to April 19, 1993, a separate incident, the Montana Freemen standoff, ended without bloodshed. Instead of scores dying, as in Waco, the 16 people who set up camp on a ranch in Montana eventually gave themselves up to the FBI without anyone getting killed. It lasted 81 days and most of the men who led the group received stiff federal prison sentences.

The FBI calls this tactic “soft siege” and it entails waiting armed protesters out to avoid large-scale bloodshed and the potential terrorist backlash, such as the Oklahoma City federal building bombing in 1995, whose perpetrators considered the act revenge for Waco and Ruby Ridge. So, while it looks like law enforcement isn’t doing anything, they’re actually trying to keep things under control until the Bundy crowd gives up.

Experts predict that the FBI may be waiting a long time. Supplies arrive without incident and the agency is keeping far back from the building itself. “The only thing that would force them to change that would be if these people posed a life-and-death threat to someone,” Steve Moore, a retired supervisory special agent for the FBI told CNN. 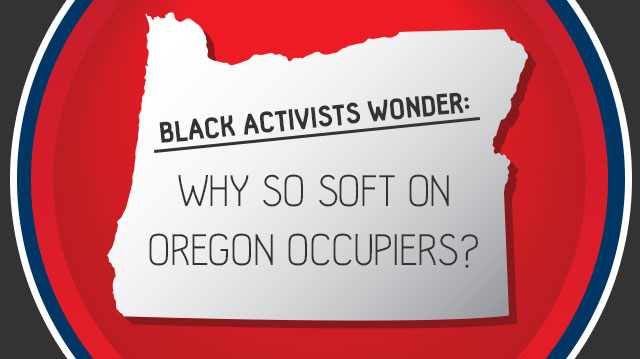 Interestingly enough, the GOP, traditionally an advocate for gun rights and self-determination, doesn’t want anything to do with the Oregon standoff. As CNN reported, Florida Sen. Marco Rubio has called the group “lawless” and Texas Sen. Ted Cruz has professed his support for law enforcement publicly. Former Florida Governor Jeb Bush called the incident “totally inappropriate” and a violation of the law. GOP hopefuls supported Cliven Bundy’s antics just two years before, but we can safely assume that Republicans will distance themselves from the Bundy family this time around, at least in part because it’s an election year.

The upside is the longer the standoff lasts, the more opportunity black activists have to bring attention to the reaction gap between groups of white protesters and black protestors. It’s also likely to play a role in the continuing political debates and upcoming primaries. Maybe the Bundy family is doing something good for our culture while staging their standoff, if only by illustrating the clear difference in outcomes often dictated by race. We’ll just have to wait and see.

Do you have thoughts on law enforcement reaction to white and black forms of public protest?