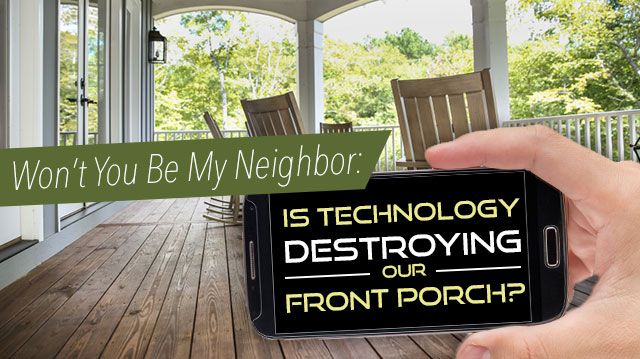 A recent article in the Canadian magazine Maclean’s revealed that half of Americans admit they don’t know the names of their neighbors. The numbers are just as bad in Canada, where more than 30 percent of people say they feel disconnected from the folks next door. The question is, why have we become so insular?

Studies show that there may be one main culprit: technology. With the rise of social media platforms like Facebook and Twitter, everyone can find out virtually anything they need to know about their friends or neighbors through a status update. And, according to Dr. Craig Malkin of Harvard Medical School, this can lead to a condition he calls “cybercelibate” — when someone forgoes friendship and/or physical intimacy and chooses instead online connections and gaming thrills.

In an article for The Huffington Post, Dr. Malkin recounts the story of one patient who hadn’t been to a party or on a date in months because of her addiction to social networks and video games. “I’m lonely most of the time,” she told Dr. Malkin, “but when I get lost in the game, I forget all about how terrible I feel.”

Even more important than friends is what Brown University research fellow Brian Dunkelman calls the “middle ring” — our relationships with our neighbors. In an interview with Maclean’s, Dunkleman said that while we may be disturbed by the fact that we don’t know our neighbors’ names, we are not always prepared to spend the time getting to know them.

Susan Pinker, developmental psychologist and author of the book The Village Effect, suggests that our lack of social interaction is having a detrimental effect on our health. Pinker argues that humans have evolved to be sociable and need physical contact for a sense of well-being.

Yet both Dunkleman and Pinker disagree that the Internet is the main cause of the demise of our neighborly relationships. Instead, they trace the start of this decline to the introduction of cars, which allowed a separation between work and home. They suggest that the Internet is only “answering a demand” and pushing us down a path we were already following.

There is one thing, however, all researchers agree on: The decrease of social interactions with neighbors and friends is detrimental to our health. A 2004 study in The Lancet Neurology found that having a low quality and quantity of social interactions leads to an increased risk of dementia and death from diseases such as coronary heart disease and stroke. Additionally, Pinker wrote in her book that those who regularly go out to eat with a tight-knit group of friends live an average of 15 years longer than those who are alone. “People with the most integrated social lives—overlapping relationships among friends, family, sports and other recreational or religious pursuits—have the best prognoses,” she wrote. 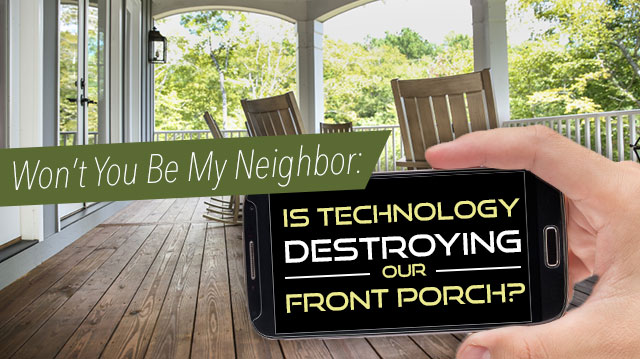 This is not to say that digital technology has no health benefit. In fact, there is a pilot program underway to test the effectiveness of virtual reality (VR) in combatting anxiety in individuals 65 years of age or older. The idea behind the project is that VR makes use of cognitive behavior therapy, which asks people to imagine the sources of their anxiety to help them overcome their fear.

On the surface, there is nothing wrong with forgoing a night out and enjoying an online game or a movie on Netflix instead. The issue comes, Dr. Malkin wrote, when people like his patient spend entire weekends online. Whether there is anything people can do to recapture relationships with neighbors is up to the individual. Dr. Malkin wrote that he instructed his patient to ask herself whenever she had the impulse to go online whether it was out of fear or desire. “The question, itself, focused her attention on what she wanted most: To feel less alone, not just for a few hours, but for the rest of her life,” he wrote.

What do you think? Is technology truly to blame for our apparent lack of connection to our neighbors, or is it something entirely different?