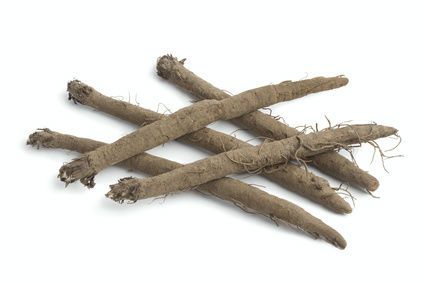 All too often, doctors are quick to treat joint pain with medication. While these drugs may ease pain, they do little to combat the underlying cause and often come with a host of dangerous side-effects. Skip the pills and instead treat inflammation naturally with these 5 natural inflammation-fighters.

Burdock has been used as a purifying agent for centuries. The root is bursting with inflammation-easing essential fatty acids and researchhas found burdock root to be effective in eliminating toxins from the body. The buildup of toxins from the environment and from the foods we eat often lead to systemic inflammation that causes pain and a host of other ailments.

Incorporate organic burdock root into stir fry dishes, soups and salads. Or, you can juice the raw root or take it in capsule form as well.

For vegans and vegetarians, flax is one of the best sources of omega 3 fatty acids around. These small but mighty seeds are unique in that they are an extremely concentrated source of lignans and inflammation-taming alpha-linolenic acid (ALA). Lignans help cleanse the body with their fiber-like qualities and provide a mega-dose of antioxidant protection. Incorporating flax into your diet will also protect your cardiovascular system, which takes a hard hit from excessive systemic inflammation.

Incorporate organic flaxseed into your favorite baked goods. The ALA in flax maintains its nutritional value even when cooked at oven temperatures for three hours. You can also sprinkle it in soups, salads, dips, shakes, smoothies and more as it has a neutral flavor. Flaxseed oil can also be added as an alternative to the seed. Just be sure to grind your flaxseed before use as the nutrients become more bioavailable than in whole-seed form.

Orange in color, this ancient spice is part of the ginger family, another incredibly potent herb, and has been used medicinally in India and China for centuries. Turmeric’s two main components, curcumin and curcuminoids, have anti-inflammatory effects so powerful, they can be compared to those of the common NSAIDs without the liver-damaging side-effect. One study found that using the herb as a pre-treatment for arthritis inhibited its onset and that those already suffering from inflammation-based pain experienced relief when treated with turmeric.

Turmeric can easily be incorporated into most dishes for an added dash of flavor with a bright yellow flare. It can also be taken in capsule form or applied topically via a poultice.

Nettle is a powerhouse of nutrition. A source of protein, calcium, phosphorus, iron, magnesium and a wide range of vitamins, this powerful herb can be used to treat a variety of ailments. A key benefit of nettle is its slow-acting cleansing properties. It has a gentle effect on the lymphatic system and acts as a diuretic to help rid the body of toxins. Nettle also inhibits the body’s production of prostaglandins, which cause inflammation. Certain components of nettle have exhibited pain-reducing properties. Because of its gentle effect on the body, nettle is often taken for long-term pain management.

Nettle extract can be taken orally in capsule form or applied topically to relieve pain. A tea made from the leaf itself can also provide relief.

While the cherry-flavored chewy candy may be the first thing that pops into your head with the mention of licorice, this potent herb may not be as sweet to taste, but will keep inflammation at bay. Licorice works similarly to the body’s own inflammation-battling corticosteroids when taken orally.

In fact, one study found that licorice’s anti-inflammatory benefits are comparable to that of the prescription medication diclofenac sodium and evidence from the study suggests that licorice may be incorporated into a short-term pain-management treatment program.

Licorice can be taken orally via capsule, tablet or powder. A tea can also be made with the leaves or it can be applied topically.