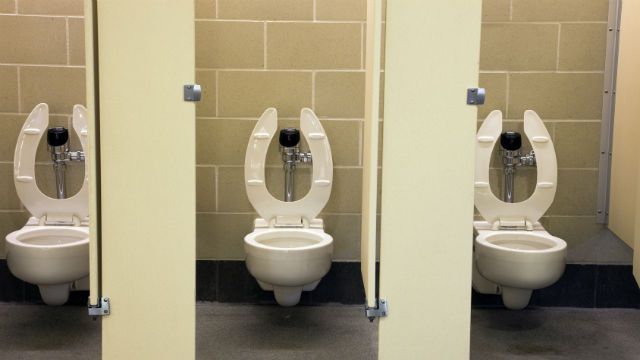 Despite public restrooms having a rather nasty reputation, their microbial communities aren’t much different from your bathroom at home, according to a new study published in Applied and Environmental Microbiology.

The researchers say that toilet flushing helps to disperse “enteric” bacteria like gut flora and pathogenic bacteria that isn’t normally found in other locations, although this type of bacteria is short-lived.

In the study, the scientists characterized the structure, function and abundance of the microbial community on a variety of surfaces like toilet seats, soap dispensers and floors, following decontamination of each surface. They analyzed the surfaces each hour initially, and then daily, for up to eight weeks.

Corresponding author Jack A. Gibert of San Diego State University remarked, “we hypothesized that while enteric bacteria would be dispersed rapidly due to toilet flushing, they would not survive long, as most are not good competitors in cold, dry, oxygen-rich environments. As such, we expected the skin microbes to take over – which is exactly what we found.”

The toilet seats reportedly hosted communities according to the gender they served: the seats of commodes in the ladies’ room had an abundance of vaginal floras Lactobacillus and Anaerococcus, and gentlemen’s room toilet seats contained gut floras Roseburia and Blautia.

Yet microbiota that came from the skin and the outdoors made up 68 to 98 percent of the communities, with fecal and gut species sparsely represented at 0 to 15 percent.

Even prior to sterilization, microbial communities linked with the outdoors dominated the surfaces and took over, once again, after decontamination of the restroom took place.

Gilbert says that ultimately, a public restroom is no more healthy or unhealthy than your bathroom at home. This may sound a bit strange, but the presence of pathogens such as Staphylococcus aureus, or MRSA, was about as rare in the public restroom as it is in the home.

That being said, Gilbert cautioned against classifying public restrooms as healthy spaces, although he says they shouldn’t be feared or considered unhealthy either.