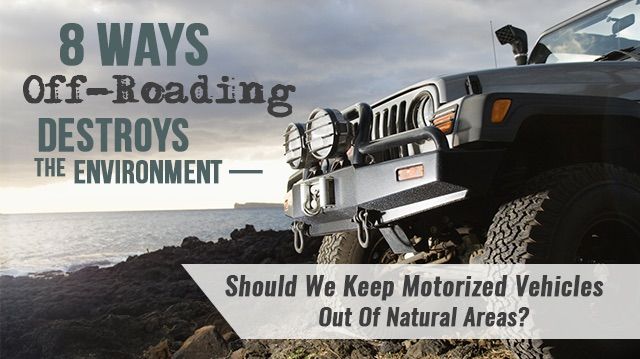 The individual driving an off-road vehicle (ORV) has a conveyance capable of tremendous destruction, yet often seems unaware or indifferent to the damage it can cause. As the Journal of Conservation Planning notes, “Technological advances have given ORVs more power and control, allowing even beginners to access remote wild lands.” The result is severe environmental impacts on many fronts.

ORV aficionados enjoy speed and the ability to ride in areas inaccessible to standard motor vehicles. Their fun and games often end up destroying natural habitats.

Of the 398 parks overseen by the National Park Service, only 12 permit ORV use. Even fewer lands under the jurisdiction of the Bureau of Land Management and the US Forest Service allow ORVs. However, unauthorized use remains a major issue. States often prohibit or restrict the use of ORVs in parks and natural lands.

ORV use is directly responsible for soil erosion in many natural areas. The causes are both damage directly from the ORV and indirect creation of conditions exacerbating runoff and wind erosion. The US Geological Survey notes that such soil impaction can persist for years after the initial disturbance.

Soil impaction directly affects vegetation. ORV use may result in the following:

Riding ORVs in areas containing cultural artifacts — such as prehistoric or Native American sites — puts those ancient treasures at risk.

ORVs often plow through burrows and nesting grounds. The loud noise may awaken hibernating wildlife before they would naturally come out of their dens, throwing their life cycles out of balance and causing starvation and reproduction issues. Not only do ORVs destroy habitat directly, they also create deep trails in wild areas that restrict animal movement. This lessens habitat connectivity, leading to dependence on fewer resources.

ORVs don’t only destroy habitat — they can run over and kill threatened or endangered species. In March, 2016, an endangered female Northern pine snake was run over by a dirt bike in New Jersey’s Wharton State Forest in the Pine Barrens. ORVs are prohibited on this 125,000-acre property. She had been tracked by environmentalists via a radio beacon for the past two years, and was discovered dead as they attempted to establish her hibernation site.

When ORVs affect runoff, water quality is also affected. The wheel cuts caused by ORVs can act as conduits, sending sediment and possibly contaminants into aquatic ecosystems. The dust from ORVs contains chemicals that may enter the water supply.

That same dust affects air quality. The dust spews contaminants into the air, which in turn has a deleterious effect on vegetation and the wildlife consuming it.

Other recreational land users, such as hikers, bikers and horseback riders, want to enjoy the beauty and peace and quiet of natural areas. Loud, fast ORVs not only disturb the serenity, but their speed might puts other users in danger. Conflicts between ORV riders and other recreational users are common.

The only way to stop the environmental destruction resulting from ORVs is to beef up enforcement and hand out tough penalties to those found guilty of violating regulations. In New Jersey, officials at Wharton State Forest have increased police presence and issued more citations in an effort to stop the destruction caused by illegal ORVs in this environmentally sensitive area. Penalties for violations begin at $250 — along with the cost of restoring affected natural resources. Vehicle impoundment brings overall penalty costs to nearly $1,000.

In 2015, two men who defied a ban on motorized vehicles in Utah’s Recapture Canyon — an area rich in Native American artifacts — received several days’ jail time, three years of probation and fines. However, they were also hit with paying $96,000 in restitution for the damage caused to archaeological sites, a consequence of their illegal ride.

It’s always a delicate balance to conserve land while still allowing the public to enjoy it via passive recreation. That balance should not include allowing anyone to ride roughshod over it. There are areas with few environmental constraints where ORV users can ride their vehicles. These powerful pieces of equipment should not destroy precious natural resources.