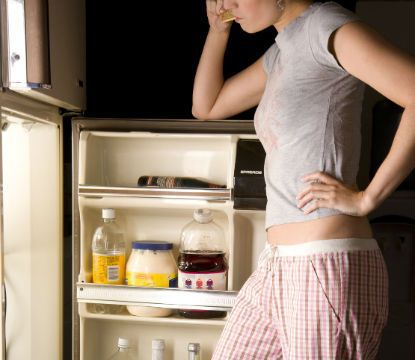 Dreaming is a natural, healthy part of sleeping, but if you have frequent nightmares that cause you to wake up during the night all parts of your life may suffer. While stress, anxiety and other factors can cause you to have bad dreams, late night snacking can also be the culprit. Eating just about anything just before bedtime can trigger more dreams because it increases the body’s temperature and metabolism, leading to more brain activity and more action during REM, or rapid eye movement sleep.

Nightmares only occur during REM and tend to stand apart from “good” dreams as they often wake the sleeper which is why they’re easier to recall. One study published in the International Journal of Psychophysiology found that a group of healthy men given spicy meals just before bed resulted in restless sleep and nightmares.

In another small study published in The Journal of the Mind and Body in 2000, ten study participants were fed ice cream, candy bars and sandwiches a half hour before bed. Seven of them had nightmares while sleeping. When the eight week study was complete, participants went back to normal eating habits and the nightmares declined dramatically.

Heavy foods and spicy foods tend to cause the worst sleep problems, including nightmares and the disruption of sleep, such as:

A hamburger or a steak. Fatty foods that are also high in protein like a burger or steak digest slowly, interrupting circadian rhythms when eaten too close to bedtime. Eating fast foods with a high fat content like a burger will stimulate the production of acid in the stomach which can also spill into the esophagus causing heartburn, poor sleep and possibly nightmares.

Chocolate. While a little dark chocolate can be good for you as it contains lots of healthy antioxidants, eating chocolate before bed is never a good idea. Milk chocolate contains about 12 milligrams of caffeine and dark chocolate has about 20, which is the same as a half-ounce of espresso. Chocolate also contains theobromine which is known to increase heart rate and the instance of insomnia.

Curry. Any spicy food can disrupt sleep and even cause bad dreams. Lying down after a heavy, spicy meal can also result in heartburn which is linked to poor sleep.

Keep in mind that any caffeinated beverages can make it hard to fall asleep, or disrupt sleep with bad dreams, including black or green tea, sodas, and sometimes even decaf coffee. Sensitive people may be affected as it still contains up to 10 milligrams of caffeine. Drinking valerian tea, chamomile or other herbal teas may help you to relax and improve sleep quality.