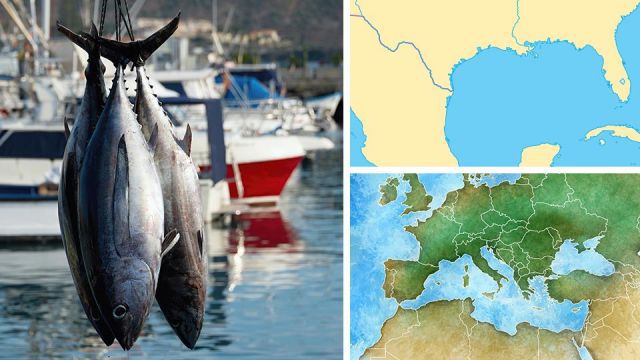 Sushi lovers beware! Your tuna could be a lot more toxic than you ever imagined. It seems high levels of pesticides, flame retardants and PCBs are linked to tuna caught in waters closer to industrialized areas, says a recent study. But trying to find out where your tuna comes from might leave you scratching your head. That’s because seafood labeling is a little fishy.

How toxic is your tuna?

If you want to know how toxic your tuna is, know first where it’s being fished, suggest researchers at Scripps Institution of Oceanography. In a leading global study, published in the journal Environmental Health Perspectives, scientists from the University of California, San Diego analyzed 117 yellowfin tunas, fished from 12 locations throughout the world. After measuring the contaminant levels of each, researchers found that yellowfin tuna caught closer to more industrialized areas — off North America and Europe — carry around 36 times more pollutants than yellowfin caught in more remote areas of Asia and the Pacific Islands.

The tuna were contaminated with a class of chemicals called persistent organic pollutants (POPs). These POPs include pesticides, flame retardants and polychlorinated biphenyls or PCBs. And it’s important to note that although cleaner tuna was found in the West Pacific, all fish tested had some level of pollutants, according to Sascha Nicklisch, researcher and lead author of the study. But the highest levels of contamination were found in tuna collected from the Northern Hemisphere, including the Gulf of Mexico.

Although the EPA/FDA consider most of the tuna analyzed to be generally safe, alarm bells are still ringing for certain segments of the population, including pregnant and nursing women. Ninety percent of tuna caught in the northeast Atlantic Ocean and more than 60 percent of yellowfin caught in the Gulf of Mexico contained high levels of pollutants.

More than 1.3 million tons of yellowfin — often sold as ahi — are sold annually. Yellowfin spend their lives in the same general region, which is why researchers could determine if geographic location actually made a difference. And since yellowfin is found globally, researchers were able to compare toxin levels within the same species, caught in varying locations.

Caution: Salmon From This Region May Contain Cocaine (look here) =>

And we’re not even talking about mercury… yet

Researchers at Scripps Institution of Oceanography also measured mercury levels in yellowfin and released that data in another study this past May. And, just like toxins, researchers found that high levels of mercury in yellowfin could also vary significantly depending on where it was caught. While mercury is a naturally occurring element that’s found in air, water and soil, exposure to mercury — even small amounts — can cause serious health problems, suggests the World Health Organization (WHO). And, it poses a significant threat to pregnant women and the development of a child in utero.

But, mercury isn’t natural to tuna. It’s emitted by industrial coal-burning factories found in continents like North America and Europe. Eventually, it finds its way into the oceans and other waterways. Natural bacteria absorb it and convert it into methylmercury. Small fish then consume or absorb the methylmercury and are eaten by larger fish. Instead of breaking down, however, mercury accumulates, becoming toxic for fish and humans alike, says Medical News Daily (MNT).

In infants and fetuses, high doses of mercury can lead to mental retardation, cerebral palsy, deafness and blindness, reports Dr. Megan Ware for MNT. In children, it can cause developmental delays and learning disabilities. And, in adults, mercury poisoning can affect fertility and blood pressure regulation. It can also cause memory loss, tremors, vision loss and numbness.

Sadly, you may never know where your tuna comes from

If the thought of toxic tuna leaves a bad taste in your mouth, wait until you try to find out where it came from. Pinpointing exactly where your tuna was caught may prove difficult since seafood labeling is rather deceptive, suggests a 2016 report by Oceana.

Oceana found that as many as one in five seafood samples tested worldwide are mislabeled. In fact, fraud can occur in every sector of the seafood industry including retail, wholesale, distribution, import/export, packaging/processing and landing. But food traceability is a hot topic these days, which encourages companies like Pelagic Data Systems and Shellcatch to work on seafood traceability solutions. Because in the end, we the consumers, are entitled to know where our seafood comes from. And what, if any, health threats are being served with our tuna.

Sadly, though, as the levels of pollution in the oceans steadily increase, so too, will the toxins we consume.

Caution: Salmon From This Region May Contain Cocaine (look here) =>