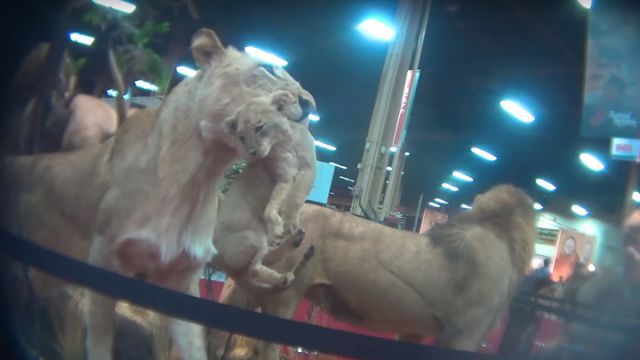 Trophy hunting represents one of the biggest ethical divides in our society: the division between those who empathize with animals and those who take pleasure in killing them.

Recently the American Humane Society brought a concealed camera into a convention run by the Safari Club. The idea behind this stunt was to show the world what really goes on at these conventions and to show how callously some people speak about causing the suffering of an animal. And no doubt those who follow the American Humane Society would be outraged after watching the footage.

In the video, vendors explained how easy it is for someone to kill a jaguar, a leopard or lion on a hunting vacation. One vendor even said they could arrange for the hunting of monkeys. Most vendors gave a 100 percent guarantee that a person who purchased one of their luxurious hunting trips would successfully hunt and kill an animal.

Why do people trophy hunt?

It’s not enough to say that trophy hunting and taking pleasure in the suffering of an animal is bad without first looking at the context within which a person has developed the opposing point of view.

Increased empathy for animals is actually a relatively new development in Western history. For a long period of time, anything “wild” or occurring in nature was seen as scary, and the idea of killing a wild beast carried a romantic notion to it. Humans conquering nature has only recently been seen in a negative light, as the reality of our impact on the planet becomes more widely known.

The mentality of humans against nature still exists, however, it’s just that it is no longer the dominant point of view like it used to be. For those that still adhere to this mentality, trophy hunting isn’t a cruel practice at all, but rather a bold adventure.

Society is, however slowly, progressing towards an attitude that places value on the well-being of animals. The evidence of this over the last year is pretty significant: outrage over Cecil the lion being killed, SeaWorld’s profit plunge and announcement to end its orca shows and breeding program, and the Ringling Brothers stating that the public no longer feels comfortable with wild elephants at its shows. Several other examples exist as well.

Trophy hunting isn’t going away anytime soon, however. The American Humane Society estimates that American hunters alone are responsible for the deaths of 126,000 animals per year.

The common defense that is given for trophy hunting is that it helps with conservation. The money generated through safari tourism is said to help with the preservation of wildlife habitats.  Animal rights activists counter this claim, stating that the money earned simply disappears into the pockets of business owners, with little of it going towards conservation efforts.

The Safari Club counters this by saying they have helped preserve 1.4 million square kilometers in Africa for the purposes of hunting. In fact, hunter and angler groups have been very successful at preserving habitats throughout the years. Ducks Unlimited has helped preserve more than 13 million acres of land since 1937, and they are an organization comprised of hunters. Without protected habitat, hunters acknowledge that they would eventually run out of targets. Ducks Unlimited wants an unlimited amount of ducks to kill, and that means protecting their habitat.

We know that hunting organizations do have a successful track record of protecting habitats, we just don’t know if that is occurring in Africa.

Animal rights activists want to see habitats protected so that animals may live in their natural settings, while hunters want those same lands protected so they can kill the animals. Here are two groups that could not be more opposed to one another in one sense, but they have a common goal. This often means these two groups of people, and all of what makes them different, have to work together.

We can confirm that the National Geographic channel has received numerous emails from at least one person with requests to produce a reality TV show where three People for the Ethical Treatment of Animals (PETA) activists have to live and work with three trophy hunters in order to protect a wetland. As of writing, that person has yet to receive a response from the network.

Here’s riddle for you: if trophy hunters buy enough land to save 100 elephants, is it okay to let them shoot 25 of them for fun?

From a strictly cost-benefit approach to ethical decision making, the answer would be yes, since 75 more animals get to live. Others have a more idealistic approach to ethics, meaning they would never agree to such terms because the idea of taking pleasure in the suffering of animals is wrong and any agreement would be enabling that activity to continue.

Botswana, an African country of two million people, banned trophy hunting in 2014 and has been replacing the lost revenue with photo-tourism ever since. A representative of the Botswana government issued the following statement regarding the country’s hunting ban:

“It is our stern belief that safari hunting of threatened species, such as lions, has the potential to undermine our regional anti-poaching efforts, as it encourages illegal trade which in turn promotes poaching.”

Safari hunting tourism has been replaced with its non-lethal cousin “photo-tourism.” This type of tourism is a lot like trophy hunting, only instead of shooting and killing the animal, the “hunter” takes a picture and the animal is able to go on about their merry way.

For this type of tourism to take over from trophy hunting, a live animal has to become more valuable than a dead one. That is to say: there must be people willing to pay more money to take a picture of an animal from afar than what people are willing to pay to kill that same animal. For that to occur, ideologies that value the well-being of animals must continue to grow.