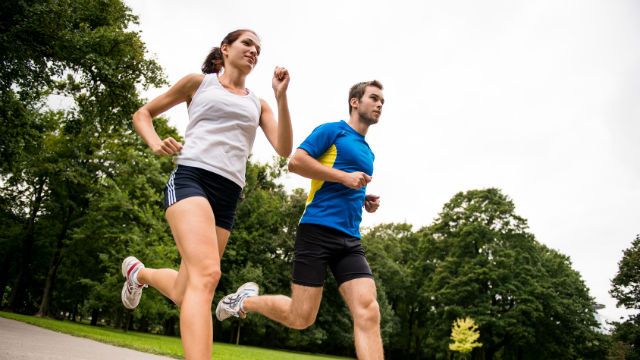 A new study out of Queen’s University in Ontario, Canada suggests that exercise may leave people feeling less anxious because they perceive their environments as less threatening. It also reveals how exercise and relaxation activities such as yoga, may positively impact those with social anxiety disorders.

The researchers asked 66 university students to watch an animation of a figure that might be perceived as moving toward, or away from them, and found that students who exercised viewed that figure as less threatening. The results showed that exercise could reduce anxiety, simply by fostering the perception of a more positive environment, the researchers noted.

Adam Heenan, a Ph.D. candidate in clinical psychology and study researcher at the university said, “You’re seeing this world as a little less threatening” after exercise and it could have implications for those who suffer from anxiety.

Previous research has indicated that people with anxiety tend to perceive dangers more acutely, and the world around them as more threatening compared to their less-anxious peers.

“Exercising and doing relaxation techniques are already known to be good for anxiety, but this shows there is another potential benefit, because if you’re perceiving the world as less threatening, that’s less stuff you have to deal with,” Heenan said.

In the study, the students either stood still, walked or jogged on a treadmill. Afterwards, they watched an animation of a humanlike stick figure. The figure’s orientation was ambiguous, and could be perceived as walking away or toward the viewer.

Heenan noted that most people would perceive the figure as walking toward them, because of a bias called “facing-the-viewer” bias. This means that humans may have evolved to see a silhouette in the distance as a potentially approaching threat that they should prepare to meet; if, instead, the figure was moving away, it wouldn’t matter.

While researchers pointed out that this new study is preliminary, it does support the use of relaxation methods like yoga and other types of physical exercise, as people feel better immediately afterwards in addition to having improved self-esteem.

“This is a big development because it helps to explain why exercising and relaxation techniques have been successful in treating mood and anxiety disorders in the past,” Heenan pointed out.

If you’ve ever wished that you could see the world as a more positive place, now you’ve got just one more reason to participate in regular exercise.