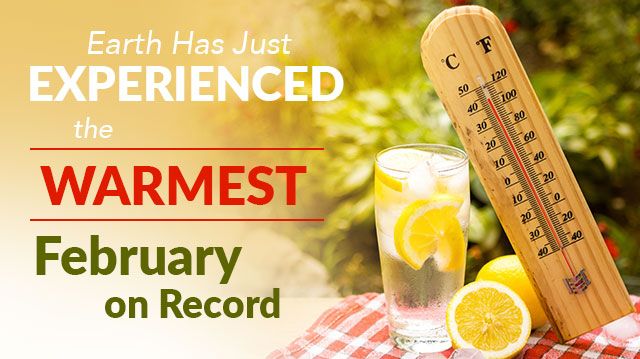 If you felt like this past February was unusually warm, you’re absolutely right. It was, in fact, the warmest February ever recorded on Earth.The data regarding this year’s unusually warm February was recently released by NASA. NASA’s Goddard Institute for Space Studies began keeping records of each month’s temperature across the globe in 1880 — and February 2016 tops the charts.

According to NASA data, the last five months — October 2015 to February 2016 — were the “five largest monthly global warm anomalies” in the entire NASA database.

So, should we be worried? The answer many specialists in this field give is “yes.”

“We are in a kind of climate emergency now. This is really quite stunning… it’s completely unprecedented.”

“Nasa dropped a bombshell of a climate report. February dispensed with the one-month-old record by a full 0.21C — an extraordinary margin to beat a monthly world temperature record by.”

During the UN climate summit in Paris, France this past December, it was agreed that two degrees Celsius was a “danger limit for global warming,” and that this rise in global temperatures “should not be passed.” However, we are getting dangerously close.

Looking at individual regions, the temperature rise in some places has been even higher. In parts of Russia, eastern Europe, Scandinavia, western and central Canada, and Alaska, some temperatures were four or more degrees above the February averages.

In parts of the US, central Europe, southwest Asia, and parts of Africa (to name just a few of the various affected regions) temperatures were two or more degrees above the February averages, due to the powerful presence of El Niño this year. 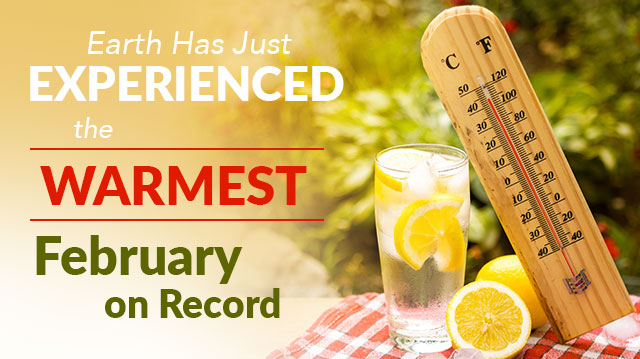 On this disturbing trend, the Weather.com news team wrote:

“Climate scientists emphasize that whether a given month is a fraction of a degree warmer or cooler than a previous month isn’t as important as the long-term, overall trend. And that trend of warm anomalies over the past year or so has become disconcerting, not simply due to the record-tying strong El Niño, but also the degree of higher northern latitude warming.”

Bob Ward, the policy director at the Grantham Research Institute on Climate Change at the London School of Economics, summarized:

“These results suggest that we may be even closer than we realised to breaching the [2°C] limit. We have used up all of our room for manoeuvre. If we delay any longer strong cuts in greenhouse gas emissions, it looks like global mean surface temperature is likely to exceed the level beyond which the impacts of climate change are likely to be very dangerous.”

It seems that we indeed have cause for concern, especially if the warming trend continues. In response to increasing climate change concerns, many parts of the world are transitioning to greener energy and embracing green transportation methods. However, are we as a planet acting quickly enough?