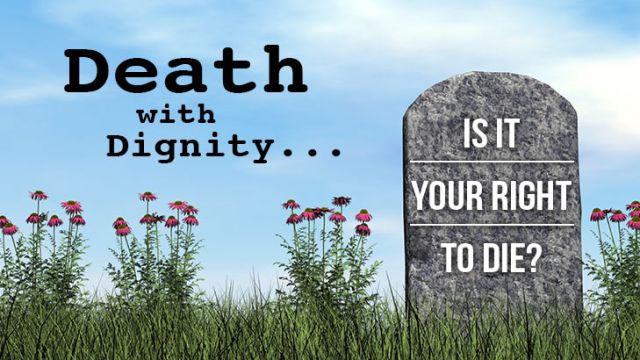 California officially has became the fourth state in the country to allow assisted suicide for the terminally ill and by far the largest in terms of population. The Golden State’s move revives a debate that seems at first to largely affect physicians, with some saying they support the legislation and others arguing that right-to-die laws force them to act against the Hippocratic Oath.

That’s the moral conundrum for doctors. But for patients suffering from terminal illnesses, changes in the law give them the opportunity to take back control and end their lives on their own terms and without burdening loved ones.

In 2014, 29-year-old schoolteacher Brittany Maynard moved to Oregon so that she could legally end her life with dignity. She had been diagnosed with terminal brain cancer. Maynard soon became the public face of the “death with dignity” movement in the United States, ending her life with legal barbiturates. Before her death, Maynard contacted Compassion & Choices, an end-of-life rights advocacy group, which helped promote a video she posted on YouTube. The video has been viewed more than 13 million times.

As of this past Thursday, upon written request by the patient, California doctors can no longer be prosecuted for helping terminally ill patients die. However,  patients must think through the decision and must make it voluntarily. In addition, patients must make numerous requests for the medication and have a prognosis of less than six months to live.

Not all doctors agree

In the states with assisted suicide laws, the number of people who request and take medication to assist death progressively has increased. But not all doctors agree with the legislation and some hospitals have not yet created policies for dealing with the law. No doctor, health system or pharmacy has to comply with a patient’s request, nor is a doctor obligated to refer you to another physician for life-ending medication.

A group of doctors who strongly oppose assisted suicide has gone to court to try to block the California law. The plaintiffs suing are five physicians from southern California and the American Academy of Medical Ethics (AAME), a Christian medical group with thousands of national members.

AAME’s subscribes to a reading of the ancient pledge taken by physicians, the Hippocratic Oath, which the group interprets as meaning that a “physician must respect all human life and must not intentionally take life (i.e. must not take the life of the unborn, must not perform euthanasia, must not provide assistance for suicide).” There are several versions of the Oath, including a common modern version that doesn’t mention taking life by advises against “playing God.”

According to a document obtained by The Wall Street Journal,  Dr. Sang-Hoon Ahn, an oncologist in Los Angeles, believes assisted suicide leaves his patients “highly vulnerable to being easily influenced or coerced into making decisions that they really do not want.”

Meanwhile, Roman Catholic and other religious health systems will also not participate.

“We are crossing a line — from being a society that cares for those who are aging and sick to a society that kills those whose suffering we can no longer tolerate,” said José H. Gomez, the Archbishop of Los Angeles, in a statement to The New York Times.

In Canada the right to end your own life is legal and has been since suicide was removed from the Criminal Code in 1972. And on Feb. 6, 2015, the Supreme Court of Canada removed the federal ban on assisted dying, and the decision came into force on June 6, 2016. Now, consenting Canadian adults with incurable, intolerable suffering are legally able to end their lives with the help of a physician.

Is it our right?

I believe it’s the latter. But what do you think? Do you feel, as individuals, it’s within our rights to die with dignity?