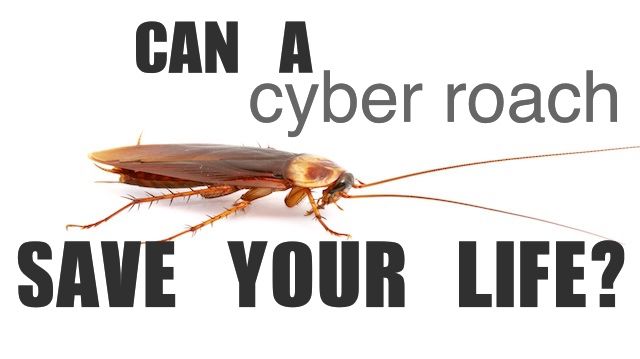 Most people can agree they hate cockroaches. But what if these insects could save the lives of earthquake victims?

While live roaches have yet to develop that particular skillset, researchers at the University of California (UC) Berkeley and Harvard University have developed so-called “cyber roaches” that could be released into collapsed buildings to find earthquake survivors.

By studying the movement of real roaches, study lead author Dr. Kaushik Jayaram of Harvard University told The Telegraph that their creation is designed to fit into cracks and crevices that are normally out of reach for rescuers. The idea is that the robot, called CRAM (compressible robot with articulated mechanisms) would locate survivors and send signals to first responders, letting them know the victim’s location and whether the rubble is stable and safe.

Cockroaches are not the only insect capable of fitting into small crevices, so you might be wondering, why the cockroach? Jayaram explained that it had to do with the creature’s unique capabilities.

“What’s impressive about these cockroaches is that they can run as fast through a quarter-inch gap as a half-inch gap, by reorienting their legs completely out to the side,” Jayaram told The Telegraph. Expanding on this further, Jayaram and his research partner, Professor Robert Full of UC Berkeley, wrote in the Proceedings of the National Academy of Sciences that cockroaches were able to withstand forces nearly 900 times their body weight without injury. This made them an ideal insect to use as a model when developing a robot that could rescue disaster survivors.

CRAM is still in its prototype phase, but Full is confident it will show the “feasibility” of using an exoskeleton model for robots.

“Insects are the most successful animals on earth,” said Professor Full. “Because they intrude nearly everywhere, we should look to them for inspiration as to how to make a robot that can do the same.”

Jayaram and Full are not the first to develop plans for a cyber roach. Researchers at North Carolina State University have developed what they call a “biobot.” Rather than use a mechanical creation, researchers used live cockroaches equipped with a tiny electronic backpack that could control the insect’s movement. The backpack could detect the location of sounds to move the roach in that direction. Dr. Alper Bozkurt, an assistant professor of electrical and computer engineering at North Carolina State University told The Atlantic that his version of the cyber roach would be the best way to locate survivors.

“In a collapsed building, sound is the best way to find survivors,” he said. Whether it’s a live roach or a robot, the goal remains the same: To save the lives of disaster victims. In the case of an earthquake, the sooner a victim is found the better.

According to a report by the BBC, the length of time a person can survive when trapped under rubble varies widely. Julie Ryan of the International Rescue Committee (IRC) told the BBC that survival depends on what happens the moments after a quake hits. Oxygen is vital, but another factor, known as “crush syndrome,” can also determine an individual’s likelihood of survival.

Crush syndrome, as the name suggests, occurs when the sheer weight of rubble on the body causes tissue to compress and die. According to Dr. Tejsrhi Shah of Doctors Without Borders, when a person is rescued and the pressure on the body is released, dangerous toxins flood the body. “It causes renal damage and shock, people are in agony with the pain and have a high risk of developing renal failure if [they] don’t get urgent medical care,” she said. Even though there are reports of survivors lasting more than two weeks, Dr. Shah told the BBC that it is “extremely rare” and the chances of survival decrease each day.

This urgency is why researchers believe the cyber roach can help. Jayaram and Full wrote in the Proceedings of the National Academy of Sciences that the CRAM is able to traverse at nearly 20 body lengths per second in vertically confined spaces, making it an ideal solution for such a time-sensitive task.

“We see this robot useful both as a physical model to test future hypotheses of the mechanisms permitting confined-space locomotion, as well as a first step toward the development of a soft search-and-rescue robot that can penetrate the rubble left by tornados, earthquakes, or explosions,” they wrote.

One thing is certain: If you are ever trapped in the aftermath of an earthquake and see what looks like a cockroach, your first instinct should not be to crush it.