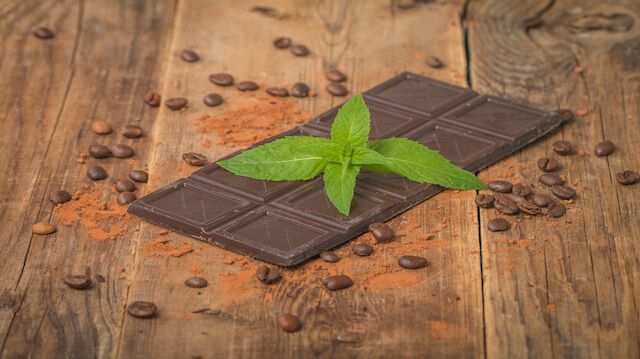 Carob, often used as a chocolate substitute, has been shrouded in a bit of mystery over the years. Some claim it tastes like chocolate, others find the flavors to be worlds apart. Some claim that carob is the healthier option, others say that this is hogwash. So, what’s the real story?

To answer that, let’s look a bit closer at both chocolate and carob, because the answer to this question is not entirely cut and dry.

In its true, unprocessed form, organic, raw dark chocolate, or cacao, is a superfood. It has been celebrated since ancient times — depicted by the ancient Mayans in stone carvings, and found in numerous medicinal and ceremonial concoctions. There is good reason for this, because in its raw state, chocolate is full of nutrients and antioxidants.

Chocolate is a good source of protein, as well as fiber. It also contains a range of B vitamins, vitamin E, and the minerals iron, potassium, copper, manganese, sulfur, calcium, and zinc, to name a few. A class of antioxidants found in chocolate, known as flavonoids, have been linked to heart health in general, and specifically to lowering blood pressure, reducing plaque buildup on artery walls, and improving circulation.

It may come as a surprise that cacao beans actually contain more flavonoid antioxidants than many of your favorite fruits — they contain eight times the amount found in strawberries! Not only do flavonoids contribute to heart health, they also help to combat system-wide inflammation and free radical damage, which can be the cause of many chronic illnesses, and contribute to premature aging.

Raw cacao is high in fat, but don’t let that discourage you! Don’t believe the myth that saturated fats are bad for you — as we’ve extensively explored — saturated fats from natural sources are essential to health, and can even aid in healthy weight loss! In addition, cacao contains oleic acid, a monounsaturated fat also found in olive oil, which may further boost its heart healthy powers.

On top of these nutrients and antioxidants, there are several interesting compounds housed in chocolate, which, simply put, make you feel good. One is phenylethylamine (PEA), which affects the brain chemistry in a similar way to falling in love. Another is theobromine, an alkaloid that stimulates the central nervous system and provides an energy boost. And, of course, there is caffeine, which has actually been found by some research to not only wake you up, but also help protect the nervous system.

A 2010 study published in the journal Diabetic Medicine linked chocolate high in polyphenol antioxidants to improvements in HDL “good” cholesterol in individuals with type 2 diabetes. On the results of their study, which was performed on 12 people in a double-blind crossover, the authors wrote:

A 2008 study, which included 30 individuals, found that dark chocolate had notable metabolic benefits. The authors of this study wrote:

“Dark chocolate reduced the urinary excretion of the stress hormone cortisol and catecholamines and partially normalized stress-related differences in energy metabolism… and gut microbial activities… The study provides strong evidence that a daily consumption of 40 g of dark chocolate during a period of 2 weeks is sufficient to modify the metabolism of free living and healthy human subjects, as per variation of both host and gut microbial metabolism.”

To find out more about how dark chocolate positively affects healthy gut bacteria, check out our article exploring the subject in greater detail.

Chocolate does come with its drawbacks, however. Both caffeine and theobromine are stimulants, and although they both can be beneficial, they can also lead to anxiety or jitters, especially in sensitive individuals. Most people are not affected when consuming a small amount of chocolate, but some people do have negative reactions to even minimal amounts of chocolate.

The biggest downside of chocolate by far is the fact that most varieties are highly processed, as well as loaded with sugar and unhealthy oils. And watch out for milk chocolate — it is usually little more than minimal cocoa, milk, sugar, and refined, processed fats.

Carob, sometimes known as locust bean or Saint John’s bread, is the pod of an evergreen shrub in the pea family. It is not botanically related to the cacao pod, but the pods do resemble each other, which is possibly where the idea for using it as a chocolate substitute came from. Carob is native to the Mediterranean, and is traditionally eaten during certain Jewish and Muslim feasts.

Interestingly, the pods are also traditionally chewed by singers before a vocal performance — as this is a folk remedy said to clear the throat.

Some of the nutrients to be found inside carob include protein, fiber, several B vitamins, magnesium, phosphorus, potassium and selenium. These ancient pods actually contain about three times as much calcium as can be found within a cacao pod. They also contain several antioxidants, including gallic acid, which is linked to potent anti-inflammatory properties, as well as to antibacterial and antiviral activity.

Likely due to its significant fiber content, carob, like chocolate, is linked to improving cholesterol profiles, and aiding in digestion. One traditional use for this pod is to alleviate diarrhea. Getting enough fiber in your diet is also highly important to heart health. Additionally, the minerals found in carob: namely the calcium, magnesium, and phosphorus, work together to support optimal bone health.

One of the standout differences between carob and chocolate is that carob does not contain caffeine or theobromine, and therefore does not have stimulant properties. This makes it a good choice for people trying to avoid these effects, and still get a “chocolatey” flavor. However, the similarity in flavor is debatable, as they are quite different, and only some people associate carob’s flavor with chocolate at all — it all depends on your individual taste buds!

A 2002 study published in the Journal of Agricultural and Food Chemistry analyzed the extracted polyphenol content of carob pods, and concluded:

“Considering most carob pods are discarded and not effectively utilized at present, these results suggested that carob pods could be utilized as a functional food or food ingredient.”

During the course of a 2003 study published in the European Journal of Nutrition, 58 volunteers diagnosed with hypercholesterolemia (very high blood cholesterol) ate bread and a fruit bar, with or without the addition of carob pulp, for six weeks. After analyzing the subjects’ cholesterol levels before and after the study, the authors concluded:

“Daily consumption of food products enriched with carob fibre shows beneficial effects on human blood lipid profile and may be effective in prevention and treatment of hypercholesterolemia.” These effects were found to be more pronounced in female subjects than in male subjects.

As far as drawbacks, while carob is higher than cacao in calcium, it is lower in iron, copper, magnesium, and manganese. It also does not contain flavonoids, and is higher in both natural sugars and carbohydrates than cacao. This may make it a questionable choice for individuals with blood sugar issues — who should check with a doctor before preparing dishes with it.

Should you choose chocolate or carob? 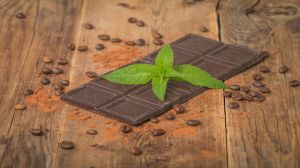 The bottom line when it comes to both chocolate and carob is that both have their health benefits, but both can also be highly processed. The key is to choose either organic, raw dark chocolate (or organic cacao powder), or organic carob powder. Make sure there are no sugars or other additives in the mix, as these obviously negate the health benefits.

People with a sensitivity to the stimulant nature of caffeine or theobromine, and individuals with high blood pressure, may be better off choosing carob. If you’re looking for a higher calcium content, you may want to go for carob as well.

Also, if you’re allergic to either chocolate or carob, you’ll likely be able to eat the other one with no worries — as they are so botanically different. When in doubt, of course, ask a health professional you trust!

Whether you choose chocolate or carob, the trick is to make your recipes using a healthy sugar replacement (not an artificial substitute!) such as organic coconut crystals. When combined with real ingredients, and made with love, either one can make a yummy dessert that your family will rave about!