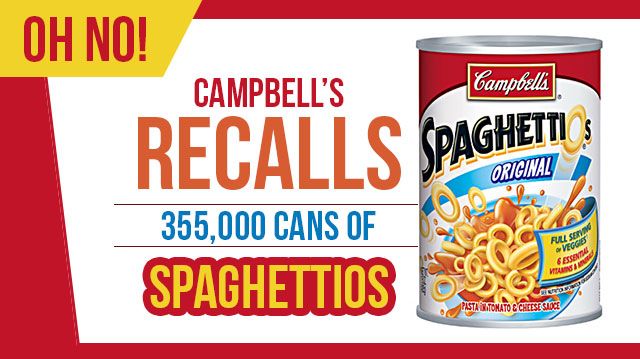 The Campbell Soup Company, headquartered in Camden, New Jersey, has issued a press release outlining the voluntary recall of 355,000 cans of SpaghettiOs. Campbell’s warned of a potential choking hazard from small red plastic pieces that may be found in the recalled cans.

The recall affects 14.2-ounce cans of SpaghettiOs Original, according to a Campbell’s press release issued on their website. The company noted, “This plastic material is from parts of the can lining which may peel off.” Unfortunately, Campbell’s was notified of the potential hazard after consumers alerted the company via complaints — meaning some people had already come cross the danger.

The recall is isolated to Campbell’s products in the United States. The 14.2-ounce cans of SpaghettiOs Original involved in the recall have a date of February 22, 2017 stamped on the base of the can. You can also identify the recalled cans by the UPC code of 51000 22432, which is printed under the barcode.

These cans of SpaghettiOs Original should not be consumed, and people can return the product to the store where they purchased it and get a refund, according to Campbell’s. The company publicly apologized in their press release, and SpaghettiOs consumers can seek further details by calling 1-866-535-3774.

This recall is just the latest example of the potential health risks posed by large corporations failing to deliver safe products to Americans. However, a larger question remains: Why are we still buying and eating canned food with little nutritional value? Don’t get me wrong, I used to crave SpaghettiOs, and the A-to-Z’s version, as well, but as an adult, I am not sure I would be so eager to peel back the lid of the can anymore. 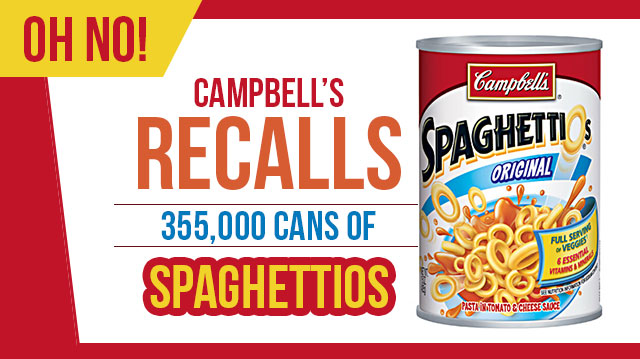 A can of SpaghettiOs Original offers up small amounts of Vitamin A, folate, iron, and protein, among a select few nutritious ingredients per serving size. However, it also has a high sodium content, 26 percent of your daily value (DV) per serving size, which is roughly 250 grams. It also contains 13 grams of sugar per serving size, with 179 calories.

On top of that, SpaghettiOs are highly processed, with a number of additives.  Even the originally nutritious ingredients used in the mix have been so heavily processed that much of the nutrition may be absent. Do kids, or adults, really benefit from a can of food like SpaghettiOs, with or without plastic?

If you make your own healthy pastas instead, you will never need to worry about you or your kids choking on small red plastic objects that may be lurking in almost a half million cans of the store-bought stuff! Simply use your favorite gluten-free, natural pasta, or better yet, some strands of spaghetti squash, and whip up a homemade pasta sauce using organic tomatoes, fresh onions and garlic, and your favorite spices. It may not taste the same, but it will certainly taste better!

What are your thoughts on canned food?