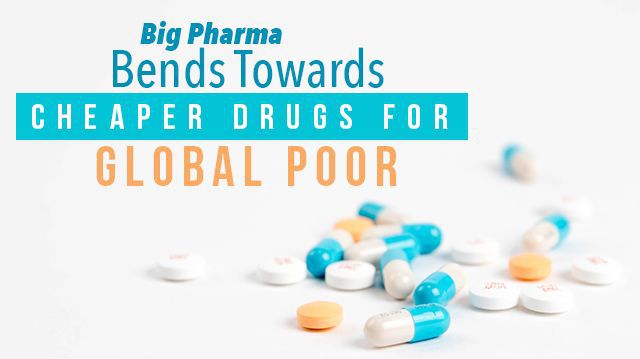 In a welcome move more characteristic of a non-profit organization than a multi-million dollar pharmaceutical company, GlaxoSmithKline (GSK) has announced plans to make its products more accessible to the citizens of poor countries.

By not filing for patents in these countries, the company is opening the door for cheap copies to be produced and sold locally. The plan applies to 50 poor nations, with companies in lower middle-income countries receiving the go-ahead to copy drugs for a minimal royalty fee.

Pharmaceutical companies have long protected their right to patent drugs as a way to recoup costs incurred with the research and development of new drugs. The balance between a company’s need to earn profits for risks associated with drug development and people’s need to access life-saving medications has long been a topic of contention.

Arguably, not rewarding companies financially for the risks they’ve taken in association with drug development will lead to fewer drugs being produced. High profits on successful drugs finance the costs associated with dead-end research and failed drug development. On the other hand, denying available life-saving medications to people for any reason raises a host of moral questions. Moreover, how much profit is really necessary to reward drug innovation?

GSK’s move is simply the next step in an evolving effort to negotiate fair, morally acceptable solutions to a complicated problem. Generic drugs have long been an important part of providing drugs to poor people in the developing world. In the past decade, however, changes in the legal framework of the global patent market have made it more difficult to legally sell generic drugs worldwide.

Big pharma’s response to the generic industry has generally been to offer lower priced drugs to poor countries on a case-by-case basis. Though these prices are not regulated and are often kept private, GSK has reported that their not-for-profit prices are comparable to generic alternatives. This was before the firm announced its new plan to allow generic versions of its drugs to be freely distributed in the poorest countries.

Pharmaceutical companies also have allowed local drug makers to produce generics for a small royalty fee. GSK was the frontrunner in implementing this strategy, granting a local license in 2001. Critics claim that this method of resolution — which is what GSK plans to continue in lower middle-income countries — is a way to maintain market control. They are likely right, but as long as people have access to the drugs they need at prices that make sense, why not allow the company that actually developed the drug to maintain at least some control of the market?

Some argue that generics are simply better for the developing world. For example, generic drug companies may concoct a medley of effective drugs in one or two pills. This makes it easier for people to gain access to the drugs they need, often product manufactured by competing pharmaceutical companies. On the other hand, generics might not be held to the same standards as drugs produced by more reputable, big-name companies.

Allowing generics to be freely produced and sold in those countries where people most need them is a huge step in the right direction. As an early adopter of this strategy, GSK will serve as proof that a successful pharmaceutical company can remain profitable while also allowing affordable access to their products. Hopefully, their example will pressure other companies to follow suit.