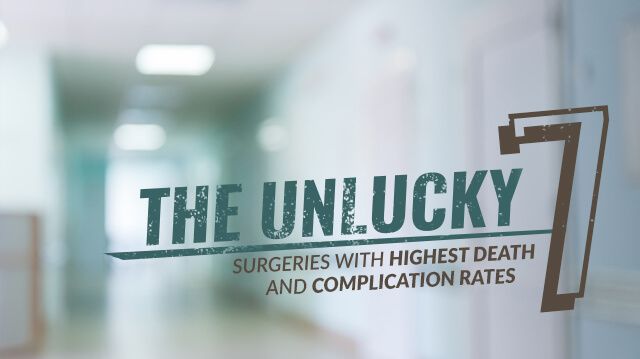 No matter how well you take care of yourself, emergencies happen. Certain emergency surgeries have unusually high death and complication rates — including some of the most common types of emergency procedures. The “unlucky seven,” as they’ve been dubbed, account for 80 percent of deaths, 79 percent of complications and 80 percent of inpatient costs, according to the Journal of the American Medical Association (JAMA).

Researchers focused on general surgery, and “procedures were ranked to account for national mortality and complication burden,” according to JAMA. The study identified 421,476 “patient encounters” with emergency general surgery, from 2008–2011. The patients ranged in age from 18 to 105, with a diverse mix of income levels, race and ethnicity. Even though these surgeries had high mortality rates, don’t panic if you or a loved one must undergo the operation. The overall mortality rate was 1.23 percent, with a complication rate of 15 percent. Odds are you’ll recover well.

If you’ve suffered an acute attack of appendicitis, you want that useless appendage removed as soon as possible. The mortality rate for appendectomy is 0.08 percent, so the overwhelming majority of people survive the surgery, which had the highest number of occurrences in the study. The complication rate is 7.7 percent.

Formally known as a cholecystectomy, gallbladder removal was the second most common surgery on the list. The mortality rate was 0.22 percent, with a complication rate of 8.06 percent. Many patients have their gallbladders removed laparoscopically, but these are not emergency surgeries. The study focused on conventional surgical gallbladder removal.

Laparotomy had the highest mortality rate in the study — a whopping 23.76 percent — but there’s a reason for that. These surgeries are exploratory, performed when a diagnosis cannot be made by any other means. The patient is usually quite ill. Based on the findings, the patient may undergo additional surgery or their condition is too grave to warrant further operations. For example, a laparotomy may reveal advanced cancer in the abdominal organs. Complication rates were also very high, at 40.15 percent. The number of laparotomies performed was the smallest on the list, at less than 10,000.

In a partial colectomy, sections of the large colon are removed. The procedure is usually performed in patients diagnosed with colon cancer, Crohn’s disease, precancerous polyps or intestinal trauma. The mortality rate for the procedure is 5.33 percent, but the complication rate is substantially higher, at 42.8 percent. The most frequent complications are infections and abscesses.

Peptic ulcers are sores on the stomach’s lining. When they bleed, they’re referred to as “bleeding ulcers.” Because of new advances in management, peptic ulcer surgery is relatively rare today. If a patient requires emergency surgery, it’s generally because other treatments have failed and the individual is very sick. The mortality rate is 6.83 percent, with a high complication rate of 42 percent. Complications include the following:

Known as lysis of peritoneal adhesions, this surgery removes scar tissue resulting from prior surgeries, infection or trauma. These adhesions are pieces of tissue that bind abdominal organs to each other, or to the abdominal wall. Avoiding adhesions is a major reason your surgeon tells you to take it easy for several weeks post-op, and not do any heavy lifting no matter how well you feel. Emergency adhesion surgery usually results from bowel obstruction. The mortality rate for this surgery was 1.59 percent, with a considerably higher complication rate of 28.09 percent.

You can’t completely avoid these emergency conditions, but you can do your best to ward them off. If you experience abdominal pain, get to your doctor before the pain becomes too severe for you to function. That’s especially true if you also run a fever. An early diagnosis may mean laparoscopic treatment or dietary management of your situation, rather than emergency surgery.