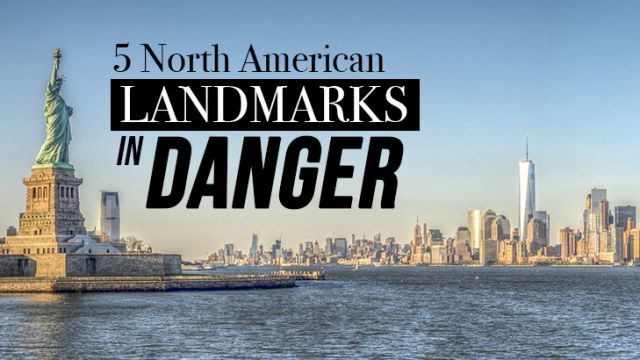 “Give me your tired, your poor, your huddled masses yearning to breathe free.” The words of poet Emma Lazarus’ “The New Colossus” are mounted inside the Statue of Liberty, giving voice to the spirit of this magnificent gift from France. However, the “mighty woman with a torch” is just one of several major landmarks now in danger from climate change in North America alone.

Some of the world’s most iconic sites are in danger, according to a UNESCO report entitled “World Heritage and Tourism in a Changing Climate.” The report offers recommendations to save these sites, but much depends on whether the world is willing to take action to fight climate change.

The Statute of Liberty

In October 2012, Superstorm Sandy did some serious damage to the Statute of Liberty. Floodwaters covered 75 percent of Liberty Island, destroying most of the infrastructure. The statute, one of the country’s top tourist destinations, did not reopen until July 2013. Rising sea levels resulting from climate change continue to threaten the statute’s viability in New York Harbor. As temperatures climb, Atlantic hurricanes are expected to become both more common and more ferocious.

If the Statute of Liberty was damaged by Sandy, neighboring Ellis Island was virtually destroyed. The entire island was submerged. Water came up to the second floor of the historic main building, where 12 million immigrants passed on to new lives in the New World. Since the museum’s infrastructure was ruined by Sandy, a million artifacts were packed away and moved to temporary storage in Maryland. Ellis Island itself reopened to visitors in October 2013, but it was not until the fall of 2015 that many of these artifacts were returned to the site.

Colorado’s Mesa Verde National Park contains a perfectly preserved Pueblo homestead dating from ancient times, carved on a cliff. Park officials fear that lack of rain from a longstanding drought increases the risk of wildfires that could destroy this incredible structure.

In the Rocky Mountain States, temperatures have risen steadily in the past few decades, brought on by climate change. The UNESCO report warns that warming over the next century “could be equivalent to that which occurred in the 12,000 years since the last ice age.” Already, Yellowstone winters are shorter, with less snowfall. At the park’s northeast entrance, there are more days when the temperature is above freezing than there were in the 1980s. The amount of snow affects park streams and rivers, leading to pronounced streamflow reduction. The reduction in streamflow and warmer water brings about a sharp decline in native fish and other species. Throughout the West, warmer temperatures have greatly increased the length and breadth of the fire season. UNESCO estimates that Yellowstone’s annual burn area will increase by 600 percent.

Critical food sources for native species ranging from grizzly bears to red squirrels are in danger. Along with more days closed due to fire threat, the loss of fishing and large wildlife will diminish the park experience for the millions who visit the park each year.

Located on the southern Nova Scotia coast, UNESCO calls Old Town Lunenburg “the best example of a planned British colonial settlement townscape in North America.” It’s a destination spot for 1.8 million tourists annually, but climate change due to rising waters threatens to inundate much of the town. A major tourist attraction, the Fisheries Museum of the Atlantic, is in particular danger, as it is located directly on the waterfront amongst historic buildings.

Those are just some of the cultural sites in danger in our part of the world. Other sites on the UNESCO list include England’s Stonehenge, which could fall prey to moles burrowing underground and disturbing and eroding the soil. The number of moles has increased dramatically since the advent of warmer summers in historically chilly Britain. The famed Easter Island heads may succumb to higher waters and increasing wave heights. It’s not just the heads that are in danger — the entire island has a high rate of soil erosion, exacerbated by less rain in the summer.

You may remember the tale of the lost colony of Atlantis. This great civilization was supposedly sunk beneath the waves by the gods, angry about the residents’ immorality. We may have different views on what is or is not moral today, but doing nothing to combat climate change certainly falls into the immoral category. Unless we act soon, Atlantis could be us.