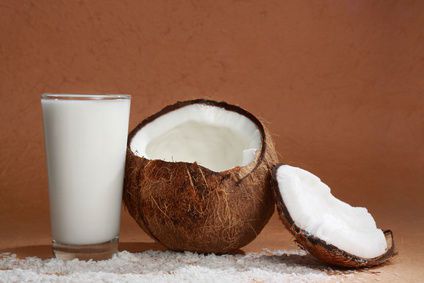 Over one-third of the world’s population depends on the milk, meat, water and oil of the coconut for nutrients. Indeed this is a good choice, as coconuts are highly nutritious. They are loaded with fiber, vitamins and minerals, and are considered a highly functional food.

Coconut oil has been used in traditional medicine throughout history in Asian and Pacific populations, and is often referred to as a “cure all.” Although it is about 90 percent saturated fat, it is good for the body.

Coconut oil improves metabolism and takes stress off of the pancreas. This tropical wonder also improves digestion and increases the absorption of vitamins, amino acids and minerals.

Known endearingly as the “fluid of life,” coconut water is the nutrient and mineral-rich sap that is found within a coconut. The water is protected by the tough outer shell of the nut, which keeps it sterile and free from fungus, parasites or bacteria.

Numerous tropical countries respect coconut water for its hydrating and renewing properties. In some tropical locations, coconut water is the only potable water available, and has been known to save lives.

Coconut milk, like coconut oil, is high in saturated fat; however, it is a healthy saturated fat that the body easily breaks down and uses for energy and other bodily functions. This lactose-free, creamy milk contains antibacterial, antifungal and antiviral properties that boost the immune system.

Recent research also shows that populations that consume coconut milk have low rates of heart disease. The milk, which is extracted from the coconut flesh, contains iron, selenium, sodium, magnesium, calcium, phosphorus, protein, potassium and vitamins C, E, B1, B3, B5 and B6.

However, not all coconut milk is created equally. In our highly processed culture, we have done to coconut milk what we have done to a number of other nutritious foods: we have hyper-processed them to the point that they no longer contain their natural goodness, and may even contain some surprisingly harmful ingredients.

Here are just 3 things that may be hiding in your coconut milk:

Bisphenol-A (BPA) is a chemical used in the lining of certain canned foods. This chemical can leach into foods that are acidic, salty or fatty, such as milks, soups, vegetables or tomatoes.

The use of BPA in our modern industrial society is staggeringly widespread, and its toxic effects are no longer a secret. One recent study found traces of this chemical in the urine of 93 percent of the population over 6 years of age (younger children were not studied).

Scientists have known for years that BPA can cause genetic damage in lab animals, and while it was long thought that the levels found in humans were too low to replicate this effect, it has lately been found that much smaller amounts than those studied can indeed cause damage.

BPA has been linked to cancer, asthma, diabetes and impaired neurological development. It has also been shown to impact the body’s natural response to estrogen, leading to a wide variety of hormonal imbalances.

To be safe, it is wise to reduce your consumption of canned foods, including canned coconut milk. A study that was published in Environmental Health Perspectives found that families who consumed fresh food for three days, ate no canned food and also used no plastic storage containers had a 60 percent reduction in BPA in their urine.

Most canned coconut milk contains guar gum, and although there is no hard evidence that it is a serious health threat, there is a possibility that you may have a sensitivity to it. Guar gum is a processed form of guar seed extract.

It is used as a thickening agent in many foods, including gluten-free foods, as well as in pharmaceutical bases. In large doses, guar gum has been linked to digestive blockages and other disturbances in digestive function.

Coconut milk sold in cartons often contains carrageenan, a highly popular additive commonly found in organic foods. It is derived from red seaweed, but, unfortunately, the process used to make it leaves it unhealthy and refined. This additive is used in both conventional and organic products regularly.

There are two types of carrageenan, degraded and food-grade. Degraded carrageenan is not allowed in food, but food-grade is. The degraded form of this additive is processed with acid and is used to promote inflammation in test animals.

Food-grade carrageenan is processed with alkali, but researchers are concerned that the acidic nature of the digestive tract breaks down the carrageenan, releasing dangerous toxins.

Carrageenan is used as a substitute for fat. It thickens nonfat or low-fat foods, or is used in place of dairy. It can be found in low-fat cottage cheese along with vegetable-based dairy products.

It is also used as a beverage stabilizer to keep liquids from separating. Carrageenan has no nutritional benefit on its own, and is even used in deli meat, prepared chicken and as a brine in pre-cooked poultry.

“Carrageenan has a unique chemical structure, and research has shown it may trigger an innate immune response in the body,” says Dr. Pradeep Dudeja, Professor of Physiology in Medicine at the University of Illinois, Chicago, who has co-authored nine studies on carrageenan.

“The immune response leads to inflammation, which is a serious public health concern since chronic, low-grade inflammation is a well-known precursor to more serious diseases, including heart disease, Alzheimer’s, Parkinson’s, diabetes and cancer,” he adds.

People who consume products containing carrageenan can develop serious long-term health complications due to increased and constant inflammation. A recent experiment noted a reduced tolerance to insulin, as well as glucose intolerance, in mice who were exposed to the emulsifier in water. With diabetes on the rise, these findings are concerning.

Carrageenan has been linked to gastrointestinal problems since the early 1960′s. There is no shortage of published work supporting the dangers of using food-grade carrageenan as an additive.

As is usually the case, independent studies are at odds with those commissioned by the food industry. Food manufacturers would suffer financial losses if carrageenan were regulated.

Individuals who remove carrageenan from their diets may notice a remarkable improvement in health and a reduction of gastrointestinal symptoms such as bloating, cramping and bowel disorders.

Making your own coconut milk

Making your own coconut milk is a great way to ensure that you get all the goodness with none of the dangers of commercially processed milk. The very first rule of making great homemade coconut milk is to select a ripe coconut. You can tell if the coconut is ripe by holding it up to your ear and shaking it very gently. If you hear a swishing sound, the coconut is just ripe enough.