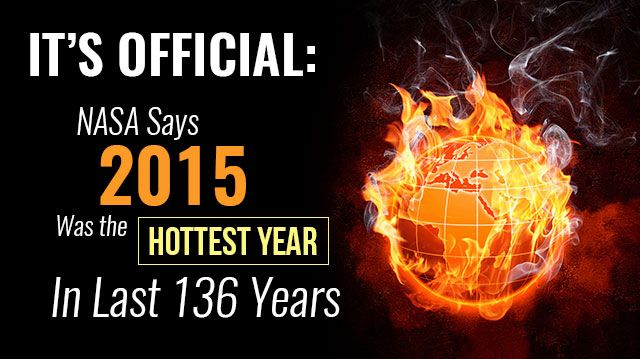 When a record is broken, it’s often viewed as a positive accomplishment. In the realm of global temperatures, however, records keep being broken, and it’s most certainly not something to celebrate. As the temperature of our planet continues to rise, it’s hard to understand why there are so many people against the concept of climate change and global warming.

Since 2001, 15 of the 16 warmest years on record took place, moving toward a climate that is less hospitable to most living creatures, including humans. Concerns about rising temperatures is obviously nothing new, but the latest record is something to acknowledge.

Study: Climate Change To Significantly Reduce Marine Life Over The Next Century

The hottest year on record was 2015

NASA declared that 2015 was the hottest year since records first began 136 years ago. We’re not talking a slight difference, either — temperatures have soared. While documenting annual temperatures, data comes from 6,300 weather stations and Antarctic research stations, as well as ship- and buoy-based observations.

Modern society began to track the Earth’s surface temperatures in 1880, and since then, last year was the warmest year to date. After breaking 2014’s record by a fairly wide margin, it’s time to consider what that means for our planet — NASA reports that the global average increased by 0.13 degrees Celsius (0.23 degrees Fahrenheit) since 2014.

Even more shocking, when comparing that to the long-term average between 1961 and 1990, the average temperature in 2015 was 0.75 degrees Celsius higher. Experts have stated that these rising temperatures are placing our planet’s climate into what they called “uncharted territory.”

You may think that these numbers don’t seem very staggering, but to raise the surface temperature of the planet 0.75 degrees Celsius requires a lot of energy. In turn, changes in climate are potentially increasing the rate of natural disasters. Last December, for instance, the UK was hit with record-breaking floods.

Although some have argued that flooding throughout the UK was due to the management of the uplands, experts are convinced that the extreme rainfall was actually impacted by climate change. When natural oscillations, such as this winter’s El Niño are combined with climate change, undesirable records are broken.

The true cost of climate change

The UK is most certainly not the only area to feel the effects of climate change, as rising temperatures affect people and the environment across the globe. In some regions, stronger hurricanes and soaring heat waves can be life-threatening.

One of the most serious impacts of climate change at this time is how it will affect water resources around the globe. When the water supply is affected, it’s essentially tied to a wide range of resources, including health, transportation, food and even ecological integrity.

As seasons shift and sea levels rise, we need to ask ourselves, “If we don’t act now, what’s next?” It’s believed that climate change will rapidly alter the world as we know it. Landscapes will change, threatening wildlife; temperatures will soar, increasing heat-related illnesses and death; and as stronger storms take effect, there will also be an increased risk of drought, floods and fires.

Perhaps the most concerning are the resources and supplies that we obtain from our planet. As new research suggests, malnutrition and food scarcity, triggered by climate change, may result in as many as half a million extra deaths by the year 2050. Based on decreased crop productivity, we could have access to fewer fruits and vegetables, increasing rates of cancer and heart disease.

Unless action is taken, researchers suggest that by 2050, fruit and vegetable availability will be cut by four percent. Increased deaths would be based on two key factors: a lack of nutrition and an increased rate of obesity. There’s no denying that climate change is the largest global health crisis of our time — the well-being of our planet is begging for our attention.

If you think that you are personally powerless, don’t underestimate your impact. If each individual is more mindful in their day-to-day lives, positive change can be accomplished. Even starting with your diet can make a significant difference. It’s estimated that 18 percent of greenhouse gas emissions come from the production of meat and dairy. 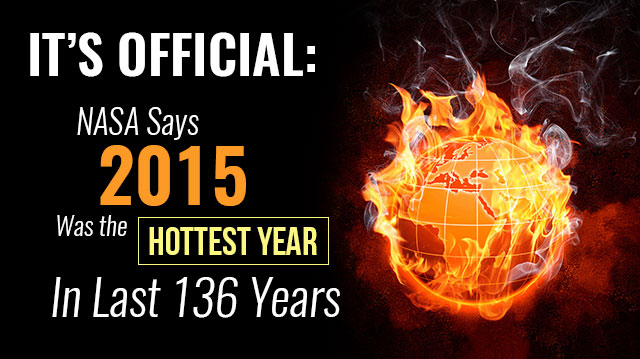 By eating lower on the food chain, you can improve your health while making less of an impact on the environment. Choose locally grown, organic produce and reduce your intake of meat and meat products. Even better, when you grow your own food, you can trim waste, making your own nutrient-rich compost.

Although there’s no denying that car emissions and oil extraction have a much larger effect on climate change than smaller, more personal choices, you can make a difference. Whether you recycle, choose renewable energy or cycle to work, share your knowledge and understanding with those around you.

Don’t be shy to get involved, either — you have the opportunity to influence others. Contact your political representatives, as well as the media. If we want change to occur, we need to take action. Also, the next time you’re at the polls, be mindful of effective climate policies. Without the health of our planet, we do not have much at all.