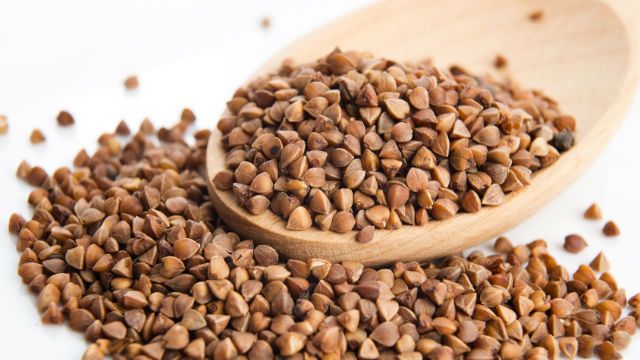 When you think of buckwheat, you probably add it straight to the list of gluten-rich grains you’re looking to avoid. However, buckwheat, while often used in cereal and grain-like dishes, is actually a 100 percent gluten-free seed.

Buckwheat is a grain-like fruit seed that is more closely related to rhubarb and sorrel than wheat. It originated in Asia and spread throughout Europe before hitting the United States, where it’s commonly cultivated in West Virginia. In fact, an entire festival is dedicated to this mighty seed every year at the Annual Buckwheat Festival in Preston County, West Virginia.

Asians often incorporate buckwheat into Soba noodles, popular in Japanese cuisine, while Europeans commonly consume the seeds, or groats, as an oatmeal-like porridge. Buckwheat flour is also very popular as a gluten-free alternative used in baking tasty breakfast dishes like pancakes or crepes.

Aside from this super-seed’s tasty, nutty flavor, and the fact that it is 100 percent gluten-free, buckwheat is chock full of nutrients that anyone, including those not on a gluten-free diet, can benefit from.

The groats are an excellent source of zinc, iron and selenium, and are an especially rich source of magnesium, which acts as a co-factor for over 300 different enzymes. Many of these enzymes are utilized in glucose and insulin regulation; key to preventing blood sugar spikes that might lead to type II diabetes onset.

Also, while most seeds are high in protein, buckwheat’s protein composition stands out from all others. Research has linked the unique amino acid lineup in buckwheat proteins with cholesterol-lowering and anti-hypertensive properties, improved digestion and reduced diabetes and obesity risk.

Related studies have found that these unique amino acid sequences are responsible for improving cholesterol metabolism, as they lower both plasma and hepatic cholesterol concentrations.

Buckwheat can be substituted for rice, couscous or orzo in any number of recipes. Soba noodles can usually be found in either the Asian section of a grocery store or the gluten-free department, and buckwheat flour adds a nutty flavor that works surprisingly well in pancakes.

Soak raw buckwheat groats for eight hours before you prepare them. The most basic way to cook them is to mix one part groats with two parts water and bring to a boil, then turn the heat down and allow the mixture to simmer for 20 minutes. Add cooked groats to soups, stews, salads and more. Try this buckwheat salad as a vegetarian side-dish at your next potluck.