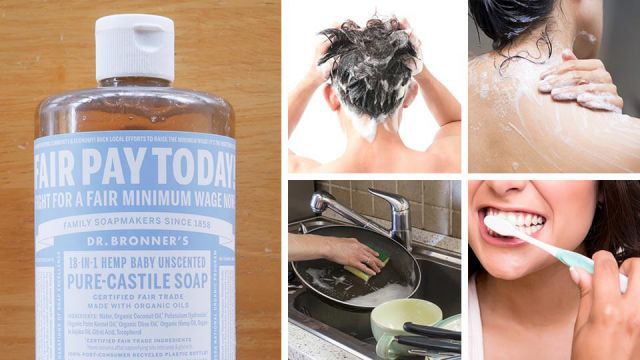 If you’ve ever found yourself in a health food store or organic supermarket, you might have noticed a wall of bottles with tiny, almost unreadable print on the labels. The famously terrible design choice makes it clear from the start that you’re in for something a little eccentric. This is Dr. Bronner’s 18-in-1 Pure Castile Soap.

As the name suggests, this soap comes with a big claim: 18 uses for just a single cleaning product. Fans say it can do everything from wash your hair to brush your teeth, clean your toilet and even supposedly double as a cooking oil. It might sound a bit ambitious, but this soap dreams even bigger than that. A cursory glance at the Dr. Bronner website reveals an upbeat, hippie-esque vibe, replete with a list of ethical “Cosmic Principles,” not to mention calls for world peace and cannabis legalization.

Huh, not what I was expecting from a bottle of soap.

Where did Dr. Bronner’s soap come from?

So if you’re wondering how a soap ended up with its own new age moral code, the answer starts in the least likely of places: Nazi Germany.

As the story goes, the titular doc, Emanuel Bronner, was born into a family of Jewish soap makers in Heilbronn, Germany, but emigrated to the U.S. in the late 1920s. He tried to convince his family to come with him, warning of the danger of the then-ascendant Nazi party. His parents, however, refused to leave their home and their livelihood. According to the legend, the last time Bronner heard from his family was through a partly censored postcard, which read, “You were right.”

Shaken by the horrors of World War II and the Holocaust, Bronner became convinced the world needed to rethink morality, and came up with his Moral ABC. However, Bronner had no idea how to promote his ideals, so he turned to the only thing he really knew how to do: make soap.

Hence, bottles covered in tiny writing proclaiming the natural goodness of humanity and calls for world peace and unity. By the time he died in 1997, his still non-mechanized home factory in Escondido, California was churning out a million soap products a year, while Bronner had become a bit of a local celebrity due to his eccentricities and charitable work.

Today, his soap comes in two main varieties: liquid and solid. There are also several flavors, none of which are particularly interesting compared to the real attraction of these soaps — their wide array of uses. For fans, the official 18 uses are just a starting point, and the soap’s most avid proponents have come up with all kinds of odd ways to make use of the stuff. Admittedly, not all the uses are equally effective, and some are downright quirky (seriously, please don’t use it to fry potatoes).

Nonetheless, there’s a reason why Dr. Bronner’s is so popular among backpackers, so let’s start with some of the best ways to use this soap.

This is where Dr. Bronner’s really excels, both in term of the solid and liquid varieties. A tiny dab of the stuff on a cloth is all you need to wash yourself all over. If you use Dr. Bronner’s exclusively as a body soap, your bottles will last for ages.

Technically, Dr. Bronner’s now makes a dedicated shampoo product, but the original soap works fine. It can really tangle your hair though, so at home you might want to consider a follow-up with some conditioner. Personally, I wouldn’t bother with conditioner on the road, and find the soap works well enough on its own.

Dr. Bronner’s works shockingly well as a shaving cream. It’s easy to lather and will make short work of your 5 o’clock shadow. It also apparently works equally well for armpits and legs, though I’ve never personally put this to the test. I’d also recommend going for a relatively neutral flavor like almond or unscented, and avoiding citrus or peppermint (which can feel a bit weird).

For a quick wash in the morning, Dr. Bronner’s is pretty refreshing, but nothing special. It’ll do the job.

This might sound a bit far-fetched, but Dr. Bronner’s feels just as good as any toothpaste. Obviously, peppermint is the flavor of choice here, but the other varieties are just fine too.

Perhaps not so useful for most travelers, at home Dr. Bronner’s holds its own as a bath soap. As previously mentioned, it’s just so easy to lather up and get a lot of frothy bubbles going.

Dr. Bronner’s is the only soap I’ve ever heard of that can be used as a massage oil. And once again, it works pretty well. Sure, it’s not perfect, and probably will never catch on among professionals. Nonetheless, for the impromptu massage, it’s great.

More things to do with Dr. Bronner’s soap

Some of the other classic uses include:

That last one might raise a few eyebrows. Apparently, a small amount of the soap diluted in a spray bottle can be used to get rid of common household bugs. Again, I haven’t had an opportunity to try this one out, but have heard it can be a little harsh on plants, so be careful.

Finally, there are the more creative uses. Try these at your own risk:

The soap also can be used as a general household cleaner, for everything from windows to toilets. Some of these applications work better than others, and there are times when you’re better off with a dedicated cleaning product instead of Dr. Bronner’s. It’s not bad for windows, while for toilets I’d probably rather use something more heavy duty.

So despite the occasional failing, it’s clear Dr. Bronner’s has plenty of potential uses. It’s also Fair Trade certified, has an environmentally friendly focus, is vegan-friendly and the manufacturers are big on charity and good causes. Some of their causes include promoting wage equality, drug reform and the previously mentioned cannabis legalization, along with animal rights and youth support services.